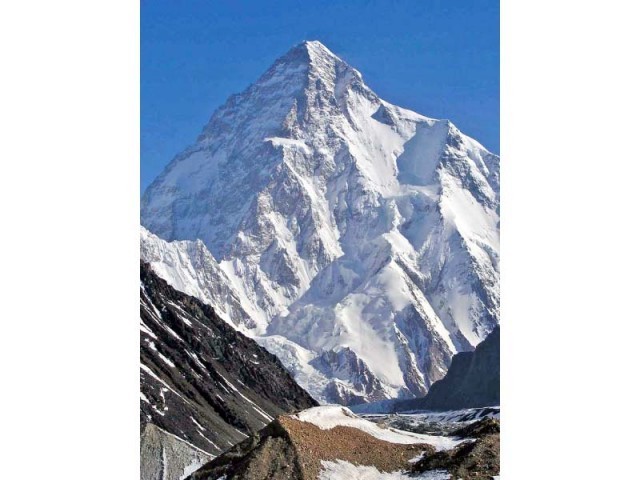 KARACHI: It proved to be a good Friday for British-American Vanessa O Brien and a host of other mountaineers as they claimed to have conquered the ‘Savage Mountain’, K2.

It followed a good week which also saw summits on other 8,000 metre peaks in Pakistan including at neighbouring Broad Peak.

O’Brien and her team had arrived in Islamabad last month for a bid to summit the world’s second highest mountain.

Her global positioning system tracker showed that she reached the summit on Friday afternoon.

Meanwhile, Icelandic John Snorri Sigurjónsson, part of O’Brien’s group, became the first man from the Nordic country to summit K2. His tracker too showed that he had summited at around the same time as O’Brien.

The summits came after a spell of unstable weather and heavy snow on the mountain.

“We 12 people to reach the summit within an hour,” Mingma wrote.

“After a couple days with bad weather, snowfalls and no visibility, the sun has finally come out today. There is a little ‘window’ but according to various forecasts, the weather will change again in the evening. There is simply not enough time to think about a summit attack. We have to patiently wait for conditions to improve,” he posted on his Instagram page on Thursday.

On Broad Peak, Spanish climber Oscar Cadiach reached the summit on Thursday. It thus completes his quest of climbing all of the 14 mountains higher than 8,000 metres without supplemental oxygen.

He was joined by Turkish photographer and climber Tunç Fındık and two Pakistani climbers Mohammad Ali ‘Sadpara’ and Mohammad Yousaf.

She was followed by Pakistanis Ali Reza and Ameen Ullah Baig, the latter who reportedly completed his conquest of the five Pakistani mountains taller than 8,000 metres (K2, Nanga Parbat, Gasherbrum I, Broad Peak and Gasherbrum II).

Meanwhile, officials have suggested that they are becoming more careful in verifying summit claims after a spate of false claims recently.

“There have been a few false [summit] claims, so now we have become strict [on certifying summits],” said Karrar Haidri of the Alpine Club of Pakistan, the central body which provides climbing permits and certifies summits.

He said unless climbers return and prove their summit and the claim is cross checked with the assigned liaison officer, would the summits be confirmed.

Rumble on the roof of the world