Any US military transgender ban could face major legal challenge

Any US military transgender ban could face major legal challenge

Trump's tweets did not make clear when a ban revers­ing former policy would go into effect­
By Reuters
Published: July 27, 2017
Tweet Email 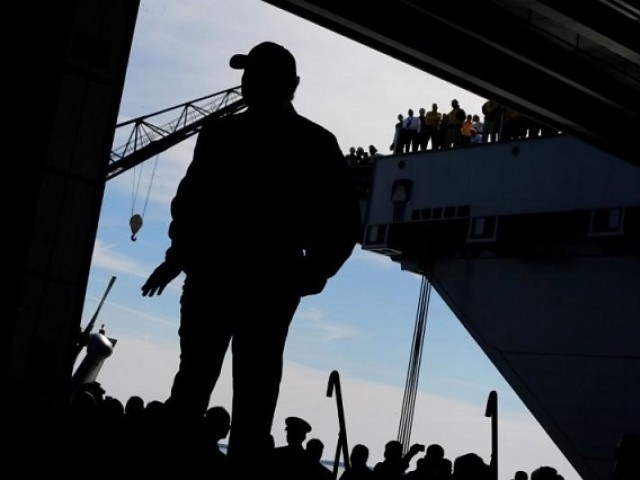 NEW YORK: President Donald Trump’s announcement on Wednesday on banning transgender people from serving in the US military unleashed a storm of legal threats from advocates who say they are seeking plaintiffs who want to file suit.

Trump’s surprise tweets did not make clear when a ban reversing former President Barack Obama’s policy would go into effect, nor whether it applies to serving members of the military or those wishing to join. But if the US Defense Department actively roots out transgender people and discharges them from the military, the Pentagon is likely to face an especially contentious fight, legal experts say.

“There’s no valid justification for excluding transgender people from the military,” said Jon Davidson, legal director for LGBT rights group Lambda Legal. “They are currently serving without a problem. There hasn’t been an extraordinary cost. There hasn’t been disruption.”

Experts say singling out transgender people would violate their rights to equal protection under the law as guaranteed by the US Constitution. Joshua Block at the American Civil Liberties Union said his inbox was flooded with emails about Trump’s ban, including from service members.

“I think the most important thing for people to understand is that for the immediate future, nothing can happen to them … Trump’s tweet is not self-executing,” said Block, a senior staff attorney on lesbian, gay, bisexual and transgender (LGBT) issues. Under Obama, the Defense Department declared in June 2016 that transgender people could serve openly in the armed forces.

The Pentagon was considering a second step of allowing openly transgender people to enlist when Trump on Wednesday issued three tweets saying transgender people would not be allowed to serve any capacity in the military, citing disruptions and medical costs. The Pentagon referred all questions to the White House, where press secretary Sarah Huckabee Sanders said Trump made the decision in consultation with his national security team and that the Defense Department would work with the White House and take the lead on a lawful implementation.

“Military Isn’t Above the Law”

Sarah Warbelow, the Human Rights Campaign’s legal director, said Trump’s declaration amounted to “discrimination on the basis of sex and identity,” and was therefore open to legal challenge. “The courts do provide quite a bit of deference to the military in determining its own policies,” she said. “However, that doesn’t mean the military is above the law.”

But the Pentagon may have a clearer path to a ban should it merely prevent new transgender recruits from signing up. If the ban applies only to those seeking to enlist, the legal bar would be higher because the military already has wide leeway to exclude classes of people based on medical needs, Block said.

Killings of LGBT people in U.S. rose to a record in 2016: report

If Trump did want to remove all existing transgender servicemembers from the ranks, it was unclear what legal mechanism he could use to forcibly discharge US troops. If transgender people disclosed their identity as a result of the Obama policy and that policy is then changed, they would have a legal recourse should they be arbitrarily denied their jobs and benefits, Davidson said.

Even those seeking to enlist might allege the government banned transgender individuals in an arbitrary way and without good reason. But at least one legal expert said a challenge would be difficult to mount because courts typically defer to the government on military matters.

Eugene Fidell, who teaches military law at Yale Law School, said even if discharged transgender service members asked for military reviews of their cases and won, those decisions could be overturned by the secretaries of the four branches of the military, who are political appointees. It would difficult to convince federal courts to reverse the secretaries, Fidell said.