Provin­cial govt to write a letter to Presid­ent on the issue
By Sohail Khattak
Published: July 26, 2017
Tweet Email 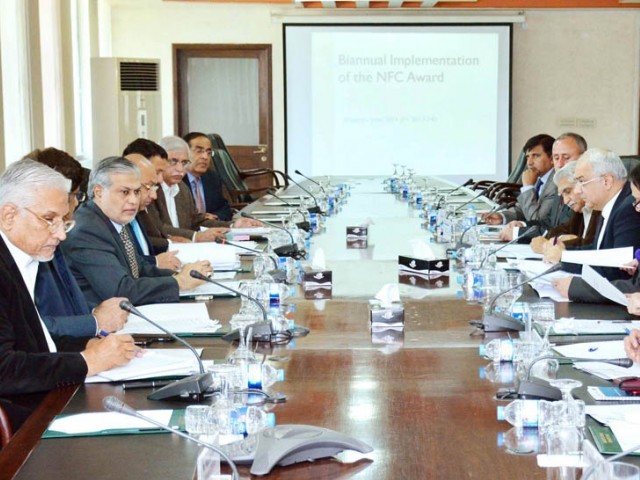 PESHAWAR: The Khyber-Pakhtunkhwa government has decided to press the government to hold the eighth National Finance Commission award.

To initiate things, the provincial government will send a letter to the president for intervention and will later take the matter before the Supreme Court.

After an internal meeting on the subject at his department, K-P Finance Minister Muzaffar Said held a press conference stating that provincial government is convening a meeting of finance ministers of all the four provinces in Islamabad to ask the government to stop its delaying tactics in holding the NFC award.

“The Finance Minister Ishaq Dar has been consistently lying and trying to deceive people. He is violating our rights and he has kept the federal government in the dark.

“There is sense of deprivation in K-P because of the delay in the NFC award and we are inviting provinces for a meeting in Islamabad very soon to build a consensus on the subject,” he said adding that the provincial government wants Centre to end the sense of deprivation emerging in the smaller provinces.

“We would also contact President Manoon Hussain to play his role in the issue using his position,” he said adding that their last option would be the apex court.

Said was accompanied by K-P non-statutory member for NFC Professor Muhammad Ibrahim in the presser who said that Ishaq Dar had linked the NFC award with the national security fund which is three per cent of the federal divisible pool and four per cent for Fata, Azad Jamu Kashmir and Gilgit Baltistan.

NFC Award: AJK may get Rs9b hike in development budget

He said that the present commission which has been constituted on April 24, 2015 held three meetings in which the last meeting was held on December 19, 2016 after which the finance minister had stated before the media that next meeting would be held in January, 2017 but that meeting has not yet been called.

They [finance ministry] make the excuse that the provinces did not agree to the seven per cent share for the national security fund, AJK, Fata and G-B, however, it was decided that the federal government would give further explanation on it and then the provinces would give their response and a meeting would be held on it,” he said adding that the federal government never gave any explanation on it.

Ibrahim said under the 18th Constitutional amendment the provinces are overburdened financially and the award is desperately needed.