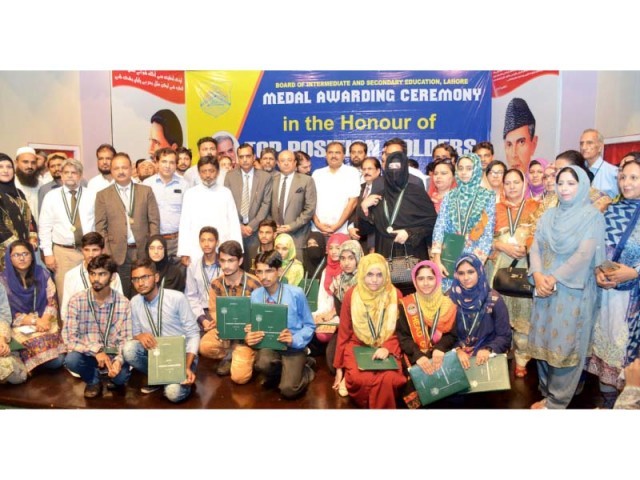 LAHORE: As many as 73.75% of 226,619 entrants passed the Board of Intermediate and Secondary Education (BISE) Lahore matriculation annual exams 2017.

Students from private schools took most of the top positions, while the Divisional Public School (DPS) of Model Town in Lahore, which has topped every exam for years, failed to get even a single position. BISE Lahore announced the detailed results during a ceremony at the Alhamra Arts Council on Tuesday. The position holders were awarded gold, silver and bronze medals along with cash prizes of Rs20,000, Rs15,000 and Rs10,000.

3,000 private students suffer after exam postponed without prior notice

The first position holder in the humanities group, Usama Ikram, served as an inspiration for his peers. He is an orphan and works as a street hawker. Sharing his struggle, he said that after the death of his father, his elder brother left his studies to support the family. Usama himself worked while continuing with his studies.

The overall first position holder, Umer Tariq, belongs to a low-income family. His father is a Grade-11 government employee. Umer told The Express Tribune that he studied on scholarship at a trust school called the Teach a Child High School for Boys in Johar Town, while his family was struggling financially. He said that he could only continue his studies because of the scholarship.

School Education Minister Rana Mashhood, who attended the ceremony, said these bright students were the future of Pakistan. He said the Punjab government had been spending a huge budget on education, which was strengthening the future of the country. “For the first time in the history of our country, Punjab Chief Minister has issued instructions to give a guard of honour to the position holders. Previously, it was only presented to bureaucrats, army generals and presidents”.

The minister said the position holders would be given their guard of honour at the Chief Minister House in Murree and later taken on a tour of foreign universities.

Addressing the ceremony, BISE Lahore Chairman Chaudhry Muhammad Ismail said that the board decided to mark the ceremony with simplicity to honour the victims of the Ferozepur Road blast. He said that this year, the board managed to announce the result on time and create a transparent examination system. “This is evident from the fact that one position is shared by six students.”