The United States has critic­ised what it has termed Chines­e "milita­risati­on" of the sea
By AFP
Published: July 25, 2017
Tweet Email 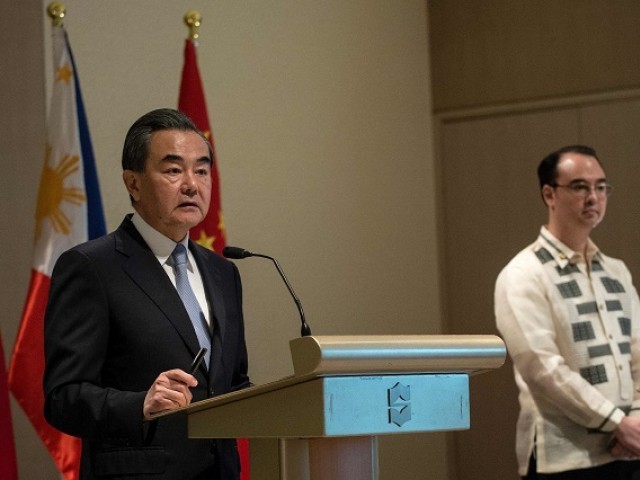 China's Foreign Minister Wang Yi (L) and Philippine Foreign Affairs secretary Alan Peter Cayetano (R) attend a joint press conference in Manila on July 25, 2017. China urged Southeast Asian nations on July 25 to unite and "say no" to outside forces seeking to interfere in the South China Sea dispute - an apparent swipe at the United States ahead of a regional summit. China's Foreign Minister Wang Yi made the statement during a two-day visit to Manila where he hailed the "strong momentum" in the improvement of bilateral ties under Philippine President Rodrigo Duterte. PHOTO: AFP.

MANILA: Beijing urged Southeast Asian nations on Tuesday to unite and “say no” to outside forces seeking to interfere in the South China Sea dispute, in an apparent swipe at the United States ahead of a regional summit.

Chinese Foreign Minister Wang Yi made the statement in Manila where he hailed the “strong momentum” in improving ties with the Philippines, a longstanding American ally which has moved closer to China under President Rodrigo Duterte. Wang’s visit came a week before he was set to return to Manila for a meeting of foreign ministers from the 10-member Association of Southeast Asian Nations (ASEAN) and its partners, which include China and the United States.

US warship sails near disputed island in South China Sea

Wang said warming relations between Beijing and Manila had helped ensure stability in the South China Sea, where rival claims have long made it one of Asia’s potential military flashpoints.

China claims nearly all of the strategically vital sea, even waters approaching the coasts of its neighbours. ASEAN members the Philippines, Vietnam, Malaysia and Brunei, as well as Taiwan, claim parts of the sea.

While the United States is not a claimant and says it takes no sides in the disputes, it has criticised what it has termed Chinese “militarisation” of the sea. Washington has repeatedly sent warships close to Chinese-occupied islands in the sea in recent years, triggering angry responses from Beijing.

Duterte, a self-described socialist, has loosened his nation’s 70-year-old alliance with the United States while looking to build stronger relations with China and Russia. Duterte has downplayed the Philippines’ dispute with China, declining to use a favourable ruling from a UN-backed tribunal last year on the issue to pressure Beijing.

He has said better relations with China, following six years of tension under his predecessor who took a hard line with Beijing over the dispute, will generate billions of dollars in promised Chinese investments and aid. Duterte said on Monday the Philippines and China were in talks for joint exploration in the sea, which is believed to sit atop vast oil and gas deposits.

India has admitted to crossing into Chinese territory: China FM