Splitting up from marry-your-rapist laws in the Middle East

Splitting up from marry-your-rapist laws in the Middle East

Such laws are built around patria­rchal attitu­des linkin­g a family’s honour to chasti­ty of women
By News Desk
Published: July 24, 2017
Tweet Email 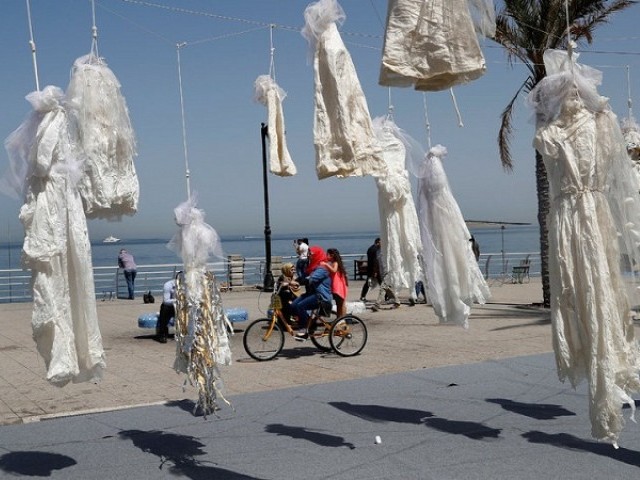 Wedding dresses displayed in April in Beirut by the Lebanese NGO Abaad to protest Article 522 in the Lebanese penal code that stipulates a rapist is absolved of his crime if he marries his victim PHOTO: AP

Recently, billboards have started to appear around Beirut showing a woman in a bloodied, torn bridal gown. The caption below the image reads in Arabic: “A white dress doesn’t cover rape,” reported New York Times.

Abaad, a women’s rights group, hung similar defiled gowns along the city’s seaside promenade. This provocative public awareness campaign is part of a new movement in Lebanon, and across the Middle East, asking for authorities to repeal the longstanding laws that allow rapists to avoid prosecution if they marry their victims.

From Lebanon where a rapist can escape punishment if he marries his victim, to India where rape within marriage is legal, bad laws are underpinning a global “epidemic of sexual violence”, legal experts said on Monday, reported Reuters.

Such laws are built around patriarchal attitudes that link a family’s honour directly to the chastity of their women. The marriage option is aimed to shield the victim’s family from a scandal, said the brother of a victim in an interview.

In 2014, Morocco repealed a provision that allowed convicted rapists to evade punishment by marrying their victims. Parliamentary votes are expected as early as this summer here in Lebanon and Jordan after government committees recommended repealing similar exemptions for both the accused and the convicted.

Any change would come too late for Basma Mohamad Latifa, whose family said she was raped three years ago in a village in southern Lebanon by a man more than twice her age. Her family did not go to the police, making a deal not to file charges in exchange for her marrying him.

In June, just after the Suhoor meal, the man then went to Latifa’s brother house where she was staying, and shot her nine times. She died, at age 22. Experts stated that the traction of the movement to repeal these laws to expansion of women’s education in the region, and a new kind of public activism spurred by social media.

Wafa Bani Mustafa, a member of Parliament in Jordan and a leading proponent of repeal, said only a change in the law could drive change in social norms Without repeal, she argued, “the state of impunity will continue, and the interest of the family will be put ahead of the victim’s right to justice.”

Marriage loopholes in rape cases are not unique to the Arab world, though countries in the region are among the last to retain them in their penal codes. The Philippines, a predominantly Catholic country, still has a marry-your-rapist loophole, according to an 82-country survey by Equality Now, a women’s rights group. Until 2006, so did Uruguay, and until 1994, so did France, according to Human Rights Watch. Bahrain’s Parliament voted last year to repeal a similar law.

And in Turkey, the government proposed last November to exonerate around 3,000 men accused of statutory rape if they married their victims and were not accused of using physical force. But so much public outcry followed that the plan was scrapped.

Opposition to repeal the marry-your-rapist laws has been far more silent than other demands made by women’s group, including criminalising marital rape, and granting women the right to pass their nationality on to their children.

But the impact the prospective changes in the rape laws would have on the lives of ordinary women in the Arab world is a matter of debate among women’s rights advocates. On top of the shame that attaches itself to rape, women’s advocates say, rape survivors in many countries do not always trust law enforcement authorities to address their cases seriously.

If the Lebanese law is repealed, it will be “a moral victory,” said Maya Ammar, a spokeswoman for Kafa, a Lebanese group that works with domestic violence survivors. More survivors will have to file charges, she said, instead of settling it privately. “These are cases that are not discussed in public,” she said. “They all happen in silence.”

In Morocco, the issue drew public attention only after a 16-year-old girl committed suicide in 2012 after being forced to marry the man she said had raped her. Her father stated that the state prosecutor has urged the accused criminal to marry her for the charges to be dropped.

The death of the girl, Amina Filali, who swallowed rat poison, prompted public outrage. Two years later, the government amended the country’s rape law, eliminating a provision that had allowed a man convicted of statutory rape to escape punishment if he married his underage victim.

In Lebanon, Latifa’s family was averse to going public, because she and her brother had come from Syria as refugees. They kept a low profile as Sunnis in a Shia village in the southern region. There, a middle-aged man visited the family for months and then, according to Mr Latifa, raped his sister. Villagers advised the family to negotiate a marriage contract with the man. “My sister didn’t like the deal, but I assured to her, it will be temporary,” Mr Latifa said.

After being married for three years, she divorced the man. “He was beating her continuously,” her brother said. “I used to see the scars on her face, when she used to visit me. But this didn’t save her. One night, after leaving a threatening note by the side of the house, he entered the house and shot her dead. He has been arrested and is facing charges including murder.”