Heat records in Asia — Pakistan is warming up

Heat records in Asia — Pakistan is warming up

In other words, the world is faced with a proble­m it cannot afford to brush under the carpet­
By Shahid Javed Burki
Published: July 24, 2017
Tweet Email 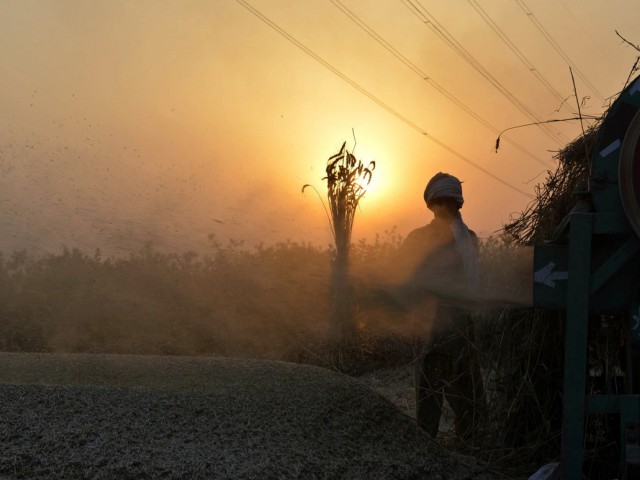 I was surprised by a conversation I had with a senior official from Islamabad who was visiting Washington to hold discussions with representatives of the Trump administration. I suggested to him that one of the subjects he should take up is the need for America’s continued support for the Paris Climate Accord. “Why should that be of concern to us,” he responded. “Global warming is their problem, they created it and they should deal with it.” Taken aback, I reminded him that while most of the accumulated carbon in the atmosphere was indeed emitted by today’s rich countries as they were industrialising, the South Asian region was among those that would suffer the most. In this context, some interesting work has been done by the World Bank analysing how Pakistan will be affected by the melting of its glaciers as the globe warms up.

Initially the melting of the ice-cover in the Himalayas will produce floods in Pakistan. These floods will be followed by water scarcity as the bulk of ice accumulated over tens of thousands years is depleted. Pamela Constable, who covers Afghanistan and Pakistan for her newspaper, recently wrote a long story titled, ‘Sweltering month magnifies Pakistan’s struggles’. According to her, “Pakistan’s water problems run much deeper and have far more potential to devastate the country. Unlike power, water is a finite resource, highly vulnerable to global warming. Pakistan’s access to it depends partly on rivers from India, a hostile neighbor, and regionally on Himalayan glaciers that are beginning to melt. By mid-century, experts predict, the country could run out of water entirely.”

But this is not the only consequence of global warming—another is the manner and speed with which Pakistan and India are heating up. In a story published by The New York Times on June 18th, it was reported that residents of Turbat, a remote town in southwestern Pakistan, have had to cope with punishingly hot summers for generations. But on May 28th, the temperature climbed to 129.2 degrees Fahrenheit, the hottest temperature ever recorded in Asia. Randall S. Cerveney, the rapporteur on weather and climate extremes for the World Meteorological Organization, a United Nations agency, said that if the Turbat reading is confirmed, an identical one from Kuwait last summer would be the third highest ever recorded on the planet. Those that were higher than these two were 134 degrees at Furnace Creek in Death Valley, California, in 1913, and 131 degrees in Kebili, Tunisia, in 1931.

It is this trend that worries climatologists and should subsequently be of great concern for Pakistan’s policymakers. Sixteen of the 17 hottest years ever recorded worldwide have occurred since 2000. The year 2016 was the hottest since modern record-keeping began in the 19th century and the third consecutive record-breaking year. In all probability, 2017 will be hotter than 2016.

Rising temperatures pose a disproportionately high risk for the poor. This is not only because they do not have the means to protect themselves from heat, rather their employers also do not make allowance for hot weather in their work schedule. A study found that when a heat wave hit Karachi in 2015, city residents with limited education and monthly incomes of less than $196 faced a significantly higher risk of heat-related deaths. Islamabad’s policymakers will need to become more conscious of how climate change will affect their country. They should not rest in comfort by assuming that it is not their problem. India is moving aggressively in some areas. It has, for instance, announced that in a few years it will completely switch to electric cars. Pakistan should be equally proactive.

There was hope that the Paris Agreement signed by all nations in December 2015 would save the globe from moving towards an irrecoverable catastrophe. It appeared that states around the world were finally willing to play the role they needed to in order to slow down the rate of increase in global warming. In his book Why Are We Waiting?, Nicholas Stern, British economist and a leading expert in climate economics, called for an “energy industrial revolution”, but it will not happen without state support. It would be helped by eliminating subsidies for fossil fuels, estimated by the International Monetary Fund at $5.3 trillion for 2015 (6.5 percent of global output, with the inclusion of spill-over effects such as air pollution). This is three times larger than state spending on research and development in renewable energy. The decision has now been made to sidestep the obstacles to reach binding global agreements that deliver a price for carbon. This makes sense. Reaching agreement on the allocation of tradable pollution rights across the border is almost as difficult. Hitherto, global emissions of carbon dioxide per head have risen, not fallen. However, President Donald Trump’s decision to pull his country out of the Paris accord is a major setback.

In other words, the world is faced with a problem it cannot afford to brush under the carpet. To move forward, we will need the exercise of an enormous amount of political will since some of the necessary actions will offend powerful interests. This will only be possible and effective if the entire global citizenry works in tandem vis-à-vis the adoption of measures by individual nations, regions, and the international community at large.