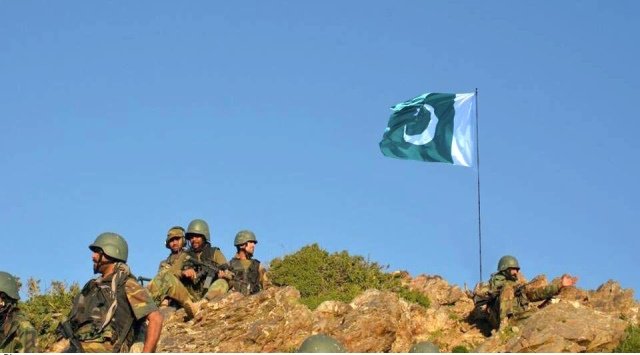 PESHAWAR: After capturing the highest peak of Khyber Agency, security forces on Sunday cleared two terrorist strongholds in the Rajgal Valley, chalking up another success for Operation Khyber-IV.

According to the Inter-Services Public Relations (ISPR), the important locations of Spinkai Top, which dominates the Saprai Pass, and Star Kille have been secured.

“Two major passes [used for] entering from Afghanistan inside Pakistan have been secured and effectively dominated by Pakistan Army,” the ISPR statement read.

“These passages were used by militants to travel. Securing them means denying them space,” a security official said.

According to security sources, army troops killed important Islamic State (IS) commander Muzaffar Orakzai during the latest action in Rajgal.

Pakistani forces on Friday captured the 12,000-feet-high Brekh Muhammad Kandao peak in an overnight operation and with it, completed phase one of Operation Khyber-IV, the ISPR and security officials said Saturday.

The strategic mountaintop provided militants a vantage point to survey the entire Rajgal area and mount stiff resistance against any attempt to dislodge them from their last bastion.

According to officials, troops, including Special Services Group commandos, killed as many as 25 militants while clearing the peak. Some 31 improvised explosive devices (IEDs) had to be defused by the troops as they made their way to the summit, they added.

Khyber-IV is part of Operation Radd-ul-Fasaad, which was launched in February after a sharp uptick in terrorist attacks in the country. It is aimed at “indiscriminately eliminating the residual/latent threat of terrorism”, consolidating the gains made in other military operations.

In a separate incident, a Frontier Constabulary (FC) official was martyred and another was injured when their vehicle hit an IED during routine patrol on Sunday.

According to officials, the incident took place in the Speen Qabar area of Bara, Khyber Agency. The spokesman of the banned Lashkar-e-Islam, Salaudin Ayubi, claimed responsibility for the attack.