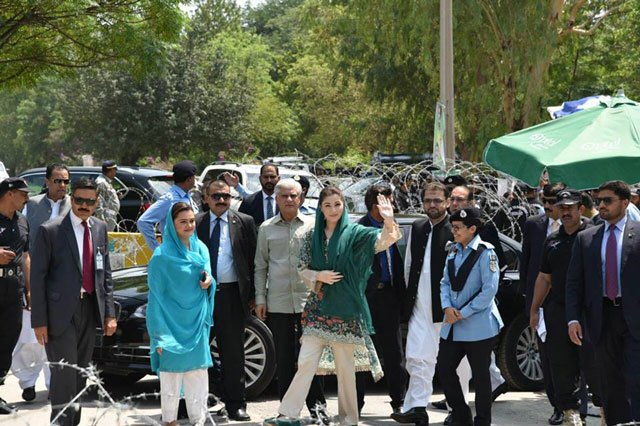 ISLAMABAD: Maryam Safdar is the real and ultimate beneficial owner of the Avenfield apartments. She never declared the ownership of these overseas properties, submitted fake documents and misled the Supreme Court, concluded the JIT in its report.

“It has been proved beyond doubt that Ms Maryam Safdar had been the owner of Avenfield properties,” the JIT stated, adding that the documents submitted by the respondents are ‘fake and manipulated’.

It added that the analysis of tax returns of Maryam – the political heir apparent of the Sharif family – shows that she had never declared the Avenfield apartments as her overseas properties.

“It can be assumed, if not contradicted by any documentary evidence, that Ms Maryam Safdar remained the real and beneficial owner of the Avenfield properties under Nielson and Nescoll offshore companies,” the report stated.

It added that Maryam has submitted fake and falsified documents to the JIT, which is a criminal offence. These documents are decoys, manipulate facts, and camouflage truth, and Hussain, Maryam and Captain (red) Safdar have also signed these falsified and misleading documents.

Hassan Nawaz is also, prima facie, involved in manipulating and misleading the SC as he had submitted these documents before the court.

In response to a specific summons to produce the original of the trust deed document of M/s Nielson Enterprises Limited, M/s Nescoll Limited and trust deed of Coomber Inc, Maryam provided what she stated were the ‘originals’ but were in reality good quality photocopies of the originals.

PM and his family’s assets beyond their known means, observes JIT

The JIT sent what was presented by Maryam as ‘original documents’ to the Radley Forensic Document Laboratory in London for examination. After the forensic examination, the laboratory’s expert Robert W Radley stated that he identified the type font used to produce both certified declaration as ‘Calibri’.

“However, Calibri was not commercially available before 31st January 2007 and as such, neither of the originals of the certified declarations is correctly dated and happy to have been created at some later point in time,” Radley stated in his findings.

“The trust declaration documents, presented by Ms Maryam Safdar to the JIT as well as the photocopies of these documents submitted in the Honourable Supreme Court of Pakistan are fake and fabricated documents,” the JIT stated.

It added that the respondents were consciously veiling the evidence and its access by the JIT.

The story built by Hussain and other respondents is totally incorrect which have been attempted to be corroborated by false documents, it said.

Based on all the material and information now available with the JIT, the report said, “it is quite evident that the alThani family did not have any interest in the Mayfair apartments in 1999.” The report added that “… the beneficial owners of the properties were not the alThani family.”