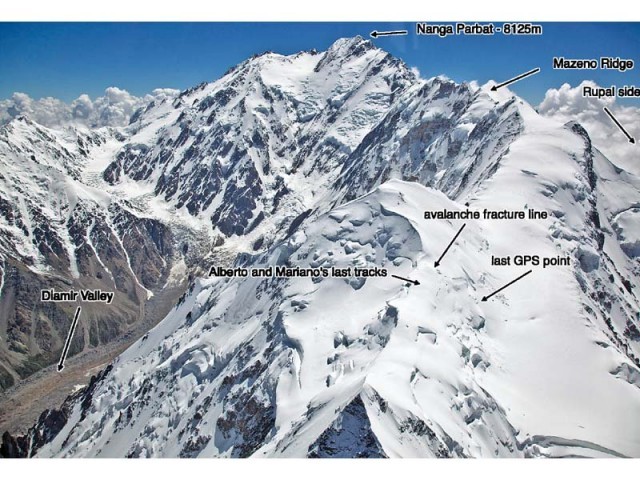 ISLAMABAD: Search team leader Alex Gavan wept uncontrollably after a helicopter dropped him at a Himalayan base camp on June 28, certain that an avalanche had killed the two men he was searching for as they tried to conquer Nanga Parbat, the “Killer Mountain”.

Gavan, a Romanian climber, had abandoned his own efforts to scale the world’s ninth-tallest mountain a week earlier to lead the search for Spanish climber Alberto Zerain and Argentinian Mariano Galvan.

Detailing the desperate search for Zerain and Galvan for the first time, Gavan revealed that he had spoken to the climbers over a satellite phone just a day before they went missing on June 24, when they stopped responding to calls.

The two experienced climbers had chosen a daring route to ascend the 8,126 metre Nanga Parbat via the treacherous 13-kilometre-long Mazeno Ridge. The ridge has been scaled successfully only once before. But when he could not make radio contact with Zerain and Galvan on June 24 near the ridge, Gavan became desperate. It dawned on him that the two men may have run out of food. 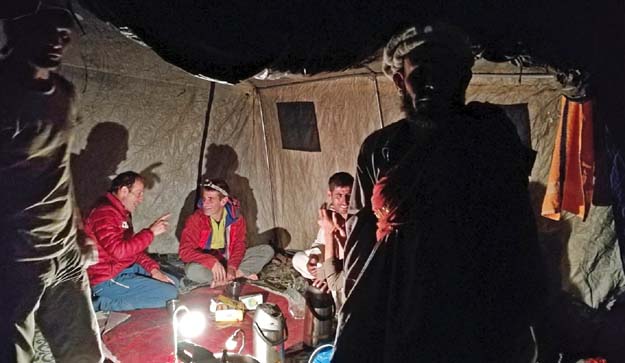 The last photo taken with Alberto Zerain and Mariano Galvan on the approach trek to the Base Camp at Nanga Parbat. PHOTO: REUTERS

However, rescue efforts were called off after a final helicopter flight over the ridge on July 1 could not trace the two climbers. Rather. photographic evidence of their last known location suggested that an avalanche had struck sometime in the eight days between their disappearance and helicopter overpass.

“Just where the avalanche debris is, was their last GPS location,” Gavan told Reuters, speaking of their last known signal on Mazeno Ridge.

“In the photos, you see the tracks of the climbers …suddenly end at the avalanche fracture line and do not appear anywhere after the fracture line,” he said.

Geographically, Pakistan is a hot destination for climbers, but climbing deaths are also common.

It rivals Nepal for the number of peaks over 7,000 metres and is home to the world’s second-tallest mountain, K2. In all, it has five of the world’s 14 summits which are taller than 8,000 metres. However,

The country, though, offers other challenges for climbers.

In 2012, militants dressed as policemen stormed the base camp of Nanga Parbat, located at 4,200 metres, killing 10 foreign climbers and a local guide.

Galvan and Zerain both loved climbing.

The Spaniard was part of an elite club of climbers who had scaled the world’s two tallest mountains, Everest and K2.

Galvan, on the other hand, had climbed Everest in 2012 but an attempt to climb K2 alone and without oxygen ended at 7,300 metres.

Romania’s Gavan said the search for Zerain and Galvan was delayed by a day because they did not have the necessary insurance, which meant he had to find the collateral to mount a rescue mission.

Gavan, who wrote a report on the failed search, said the pictures taken during a second helicopter search on July 1 were conclusive proof that the two men died in an avalanche.

“We looked down the ridge, we looked in the valleys, we looked everywhere, we triple checked,” he said.

Meanwhile, an eight-member team from the Pakistani mountaineering company Karakorum Expeditions had launched a new ground search on Friday despite Gavan’s evidence.

“The team will search on the Mazeno Ridge of the Nanga Parbat, where the missing climbers are believed to be buried under an avalanche,” company spokesperson Mehboob Ali said.

However, Gavan described that operation as “irresponsible”, noting that it would “only endanger more people’s lives”.