Opposi­tion says convic­ts will have to be sent packin­g
By Our Correspondent
Published: July 10, 2017
Tweet Email 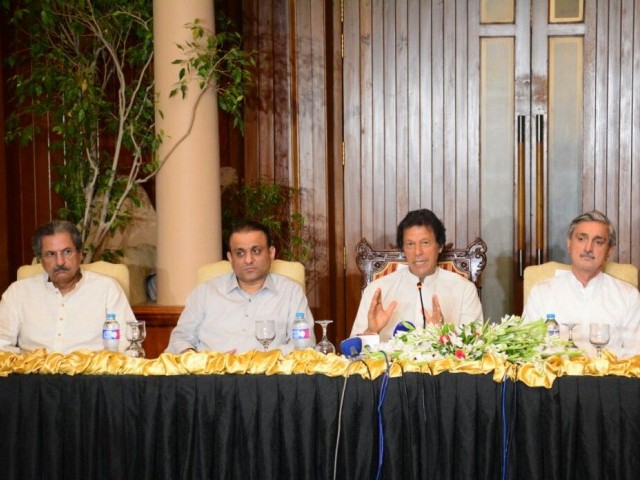 Mian Mehmoodur Rasheed, former Punjab governor Chaudhary Muhammad Sarwar, Mian Aslam Iqbal and Salooni Bukhari of PTI all agreed their claims could be corroborated by the fact that PML-N declared it would not accept the Supreme Court Joint Investigation Team’s (JIT) findings in the Panamagate investigation if it failed to record the statement of a Qatari prince.

In a joint press conference held on Sunday, Rasheed stressed PML-N had stopped the Qatari prince’s to visit Pakistan to make the JIT report questionable. He underlined that in the next phase of accountability, ‘khwajgan’ of the party would have to present themselves for accountability. The ruling party was the product of military rule and that’s why its attitude is dictatorial, he maintained.

PTI senior leader and former Punjab Governor Sarwar said the ruling party’s decision to not accept the JIT’s finding was a u-turn. “It seems the rulers are trying to challenge the rule of law in the country.

The JIT was formed by the top court and is working under its control, he said. “The ruling party is continuously struggling to give impression that the JIT is working under someone else’s supervision,” added the former governor.

He said it was the responsibility of the ruling family to present Qatari prince before the JIT as he was their prime witness. Sarwar said PTI always believed in democracy. He added if the democratic process was derailed in any way, all responsibility would lie on the shoulders of the ruling party due to its continued attempts to sabotage the JIT and its refusal to cooperate.

He said the PTI would support the JIT on every forum. “The PML-N should not have distributed sweets on the apex court’s decision to form the JIT to probe Panamagate case if they were going to question the body,” he said.

The former governor added PTI never talked of dissolving assemblies, but convicts would have to be sent packing. PTI MPA Mian Aslam Iqbal said it was his party’s demand from the first day that all proceedings of the Panama and Model Town massacre JITs be made public.

PPP Lahore President Azizur Rehman Chan also reacted over the remarks of federal ministers who said they would not accept the JIT’s investigations in the Panamagate case. He said first it was only Nihal Hashmi and now there are several others.

He advised the Sharif family to refrain from the politics of war as it would create unrest in the country. “The Sharif brothers have not learnt their lesson,” he said. “The PML-N wants to run the apex court like it is running the Punjab police.” He asserted the PPP would not allow the ruling party to establish a monarchy in the country.