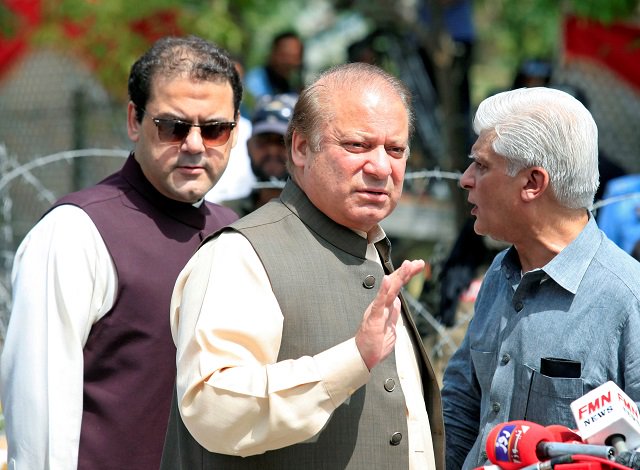 ISLAMABAD: The Joint Investigation Team (JIT) probing the offshore assets of Prime Minister Nawaz Sharif and his family in line with the Supreme Court’s April 20 judgment in the Panamagate case will submit its fourth and final report to the top court today (Monday).

The five-judge bench was split 3-2 while announcing the April 20 verdict, with head judge Justice Asif Saeed Khosa and Justice Gulzar Ahmed ruling against the premier in their dissenting notes. Through its final decision, the Supreme Court formed a JIT and ordered it to investigate in depth the money trail for the Sharif family’s contentious London flats at the heart of the case.

A three-judge bench of the Supreme Court was formed to oversee the implementation of the April 20 verdict.

The court decision was accepted by all at first. Both respondents and complainants distributed sweets and claimed victory when it was announced, especially the ruling PML-N, without fully realising what would come next.

‘Be ready’, Imran tells nation ahead of Panamagate JIT report

The JIT was given two months to find out answers to some 13 questions – mainly related to the money trail for the Sharifs’ London properties – and a deadline of July 10 was set by the court.

The JIT submitted its first fortnightly report on May 22 and the court expressed satisfaction over it. At the time, Pakistan Tehreek-e-Insaf had requested the court to make the report public, but the bench observed it would do so when it deemed it necessary.

Soon after the first report was presented and the JIT questioned Premier Nawaz’s cousin Tariq Shafi in an hour-long session, controversies began to appear.

On May 23, Shafi filed a complaint with JIT head Wajid Zia, alleging some panel members ‘misbehaved’ with him during his interrogation on May 15.

The controversy deepened when a photograph of prime minister’s son Hussain Nawaz appearing before the JIT was released on May 28.

On June 7, when the JIT presented its second fortnightly report – Hussain filed an application with the top court against the picture leak and requested it to investigate the matter.

The JIT informed the court that it had not only traced the individual who leaked the photo but also sent him back to his parent department which had initiated a departmental inquiry against him. However, the probe panel’s head complained that some state institutions were tampering with the record related to past cases against the Sharif family.

The Supreme Court, subsequently, asked the FIA to investigate the allegations of record tampering. The agency would go on to declare the SECP chairman guilty of the tampering and recommend registration of an FIR against him.

As the investigation progressed, the JIT summoned more and more members of the Sharif family and controversies intensified.

A story about a Whatsapp call made by the Supreme Court Registrar to the SECP chairman asking him for inclusion of a specific person to a panel of names sent by the commission to the top court for the formation of the JIT made its way to the media.

Meanwhile, a video of PML-N senator Nehal Hashmi threatening members of the JIT and their children also found its way to the media. The Supreme Court took notice of Hashmi’s speech and contempt of court proceedings against him are pending with the court.

However, the Sharif family’s prime defence in the case – Qatari Prince Hamad Bin Jassim bin Jaber al Thani who supported the Sharifs money trail through two separate letters – did not appear before the probe team.

On June 7 – when the JIT presented its second report – Justice Azmat Saeed Sheikh said that if the Qatari prince did not come to testify his claims then his letters may be trashed.

The PML-N stirred another controversy on Saturday when some federal cabinet members threatened that the party would not accept any JIT report which did not include the Qatari prince’s statement.

A more crucial question, however, is whether the top court will accept a report minus the prince’s testimony.

PTI chief Imran Khan, who attended almost all day-to-day hearings of the Panamagate case and the April 20 judgment implementation bench, will not attend today’s (Monday) hearing.

Meanwhile on Sunday, top heads in PML-N came together to map out a plan to wage a battle on both legal and political fronts against the probe panel in a bid to avert any adverse outcome.

Low-key meetings between the prime minister and members of his legal team arrived at the decision to challenge the JIT report – in the Supreme Court as well as in public – sources in the ruling camp said.

On the legal front, the ruling camp will cite what it believes are lacunae in the JIT probe: that it has not recorded the statement of the Qatari prince. It would argue that by not recording the statement of PML-N’s ‘key ‘witness’, the probe panel has not fulfilled a basic requirement of the probe. (WITH ADDITIONAL REPORTING BY SARDAR SIKANDER FROM ISLAMABAD)

India fails to stave off investment in Pakistan