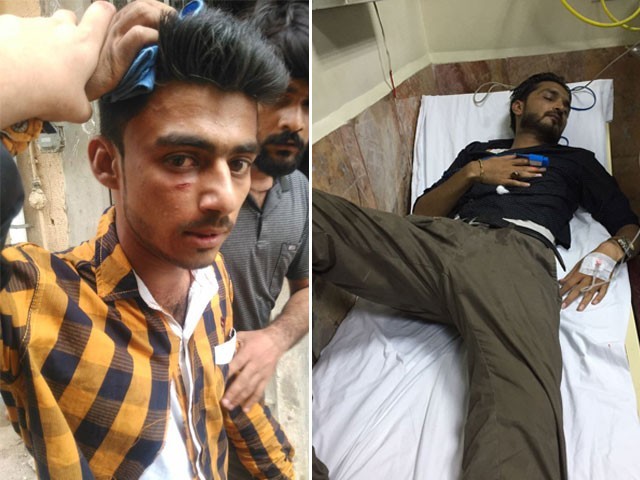 Party workers claim violence being carried out by their opponents. PHOTO: twitter.com/MaleehaManzoor

As polling began on Sunday for Karachi’s PS-114 amid strict security, the ruling Pakistan People’s Party (PPP) and the Pakistan Tehreek-e-Insaf (PTI) took to Twitter to accuse each other of attacking their party activists.

While the polling process remained largely peaceful at several polling stations, clashes were reported at a polling station in Chanesar Goth where a PTI polling agent was allegedly beaten up by some PPP activists. However, the situation was brought under control after paramilitary Rangers’ intervention.

The PPP claimed that that its activists Farhan Sultan and Azhar Aziz were thrashed by PTI men.

Rangers chief Maj-Gen Muhammad Saeed said two suspects were taken into custody for possessing weapon and rigging, adding that the constituency remained peaceful apart from a scuffle which broke out at the Government Boys Secondary School, Chanesar Goth.

Here are some of the tweets posted by activists of both PPP and PTI, claiming violence and rigging being carried out by their opponents:

#PPP worker @farhansultan18 was punched in chest by PTI gundas while he went to vote. He fainted, has been admitted in hospital now. #PS114 pic.twitter.com/aJ7ChuHGba

Non voters inside Chanesor Goth polling stations. In front of me Rangers caught some PPP bogus voters. The only way PPP knows

Seems like #PPP has taken over the roll of "Badmashi" from #MQM. #PS114

They are doing all these drama in Chanesar bcuz they font have vote there
Stopping voters from voting is crime shame on #PTI #PS114 https://t.co/jsh3ytsN0i

Ohh .. just got to know. He is inhale #Charas, involved immoral activities in #ChanesarGoth. ab wo abnormal hai……#ShutUp #PS114

#PPP using Loudspeakers in their polling Camps which is not allowed by #ECP
But who cares? #PS114