Suhaiy­mah Manzoo­r-Khan says if "you need me to prove my humani­ty, I’m not the one who’s not human"
By News Desk
Published: July 7, 2017
Tweet Email 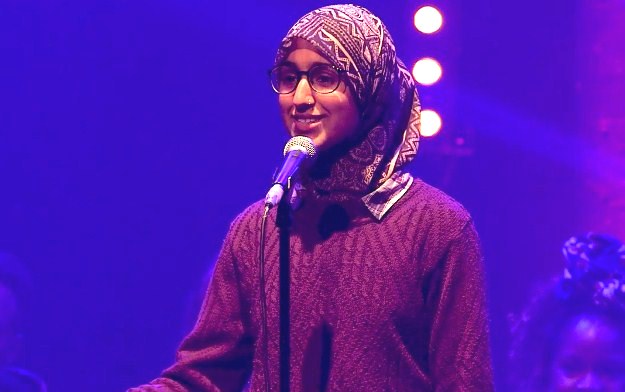 A 22-year old British-born Pakistani slam poet has evolved the way in which people think about the religion of Islam, and how Islamophobia has created the necessity to ‘humanise’ Muslims for those who see it as frightening or foreign, reported Huffington Post.

With Islamophobia on the rise in the US and different regions of Europe, many Muslims have to go to painful lengths to defend their faith and to separate Islam from extremist versions and fringes. Great efforts have to be invested to showcase members of the Muslim community who are ‘humans’ like the rest, and that is a problem, according to Suhaiymah Manzoor-Khan.

Manzoor-Khan performed her piece, “This Is Not A Humanising Poem,” at The Last Word Festival 2017 – Poetry Slam Final in June organised by London-based charity Roundhouse.

In it, Khan warns, “This will not be a ‘Muslims are like us’ poem.” She also runs a blog site on the experiences of standing at the intersections of religion, politics and gender called “The Brown Hijabi”.

Khan argues throughout the poem that Muslims should not only be valued for being relatable or recognisable, but for so much more than that. “I refuse to be respectable,” she said. She makes a direct hit at the politics of respectability that’ is prevalent all over the world requiring a certain kind of behaviour from women — and in this case, from Muslims everywhere.

The media tends to opt to highlight extraordinary Muslim figures to combat criticism and bias — including world class athletes, television stars, social workers and activists. But Khan pointed out that Muslims are ‘dehumanised’ by the very efforts that are adopted to prove their humanity.

These Muslim school children are called ‘terrorists’ in their classrooms

Many attempts have been at play recently to ‘other-ise’ Muslims, from the US president to civilians of different countries, making anti-Shariah claims, claiming inherent misogyny and oppression in the faith.

But efforts to shun or combat these claims should not be equally myopic, claims Khan. “If you need me to prove my humanity,” she said, “I’m not the one who’s not human.”