Pakistan's GDP growth rate is even higher than that of China: Harvard study

Pakistan's GDP growth rate is even higher than that of China: Harvard study

Pakist­an's GDP is predic­ted to grow by 6 per cent over the next 10 years
By Wali Zahid
Published: July 7, 2017
Tweet Email 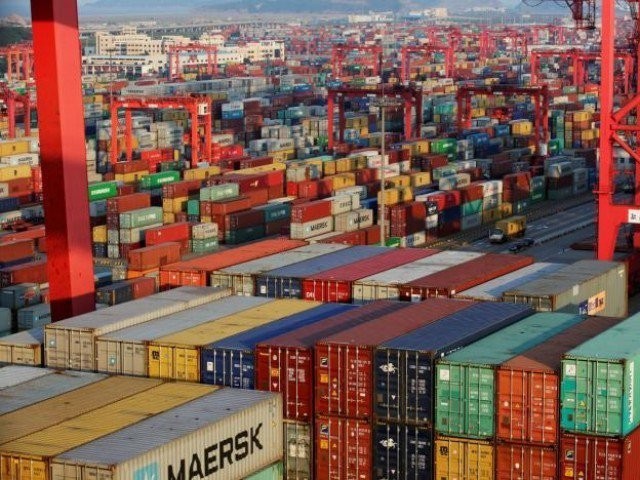 Pakistan’s 5.97 per cent growth rate is above that of China, which is set to grow by 4.41 per cent. PHOTO: Reuters

Pakistan’s predicted annual growth rate over the next 10 years is nearly 6 per cent, according to the revised growth projections presented by researchers at the Centre for International Development (CID) at the Harvard University.

This is a one-point GDP increase as in the CID’s earlier projections, Pakistan GDP was set to grow at 5 per cent by 2025.

Although China’s huge economy (current GDP at $12 trillion) cannot be compared with that of Pakistan (current GDP at $300 billion), Pakistan’s 5.97 per cent growth rate is above that of China, which is set to grow by 4.41 per cent. 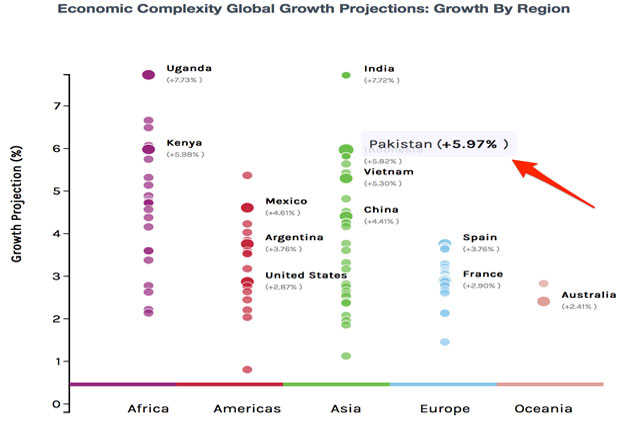 Pakistan’s 5.97 per cent growth rate is above China, which is set to grow by 4.41 per cent. PHOTO: THE ATLAS OF ECONOMIC COMPLEXITY, 2015. HARVARD CID

Led by Harvard Kennedy School, the research is called ‘The Atlas of Economic Complexity’.

The CID’s growth projections are based on the measures of each country’s economic complexity, which captures the diversity and sophistication of the productive capabilities embedded in its exports and the ease with which it could further diversify by expanding those capabilities.

According to the Harvard study, the economic complexity not only describes why countries are rich or poor today, but can also predict future growth — about five times more accurately than the World Economic Forum’s Global Competitiveness Index.

Pakistan’s neighbour India, on the other hand, is predicted to grow by 7.72 per cent, the world’s highest. The CID believes that the economic pole of global growth has moved over the past few years from China to neighbouring India and it is likely to stay there over the coming decade.

Except for India, Pakistan will beat all Asian economies in GDP growth. These also include giant Muslim economies.

Here are some regional countries (and their GDP growth) Pakistan will be ahead of:

Harvard’s leading research hub uses this fact to measure the amount of the know-how that is held in each economy.

A major trend that emerges from Harvard’s report is that the growth in emerging markets is predicted to continue to outpace that of advanced economies, though not uniformly.

In addition to Pakistan, the CID projections are also optimistic about new growth hubs in East Africa and new segments of Southeast Asia, led by Indonesia and Vietnam. it also notes that economies based on commodity output face slower growth rates as commodity prices continue to remain under pressure.

With special economic zones (SEZs) being built under the China-Pakistan Economic Corridor (CPEC) project, it is an opportunity for Pakistan to move away from commodity output by producing value-added goods in joint ventures with Chinese firms and increase its exports. This way, Pakistan can have even faster income growth.

The Harvard growth projections are in line with other short, medium and long-term GDP growth forecasts for Pakistan.

In a bid to materialise this growth projection, what needs to be chalked out is a multi-pronged strategy. Pakistan needs to diversify its product capabilities. With likely new FDI inflows, Pakistani firms can go into producing value added goods both for domestic consumption as well as exports.

The firms, currently content with domestic sales turnover, need to introduce some percentage of exports to their strategic plans. Similarly, Pakistan’s agriculture sector needs to address its lack of sophistication and crop and distribution losses. The cumulative effect of even modest steps will help increase our GDP growth.

Wali Zahid is an award-winning journalist and a blogger. He is Pakistan futurist and writes on the economy. He tweets @walizahid.