Says nation must decide once and for all whethe­r ‘we are a democr­acy or a monarc­hy’
By Asad Zia
Published: July 5, 2017
Tweet Email 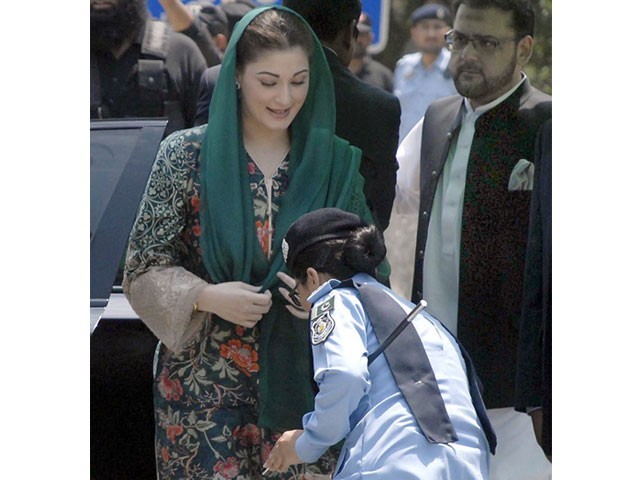 PESHAWAR: Calling the prime minister’s daughter Maryam Nawaz ‘a criminal’, the PTI chief Imran Khan on Wednesday lambasted the PML-N government for providing her VVIP protocol at her appearance before the Panamagate Joint investigation Team (JIT).

“This is a criminal investigation and Maryam should appear like a criminal not a like princess as her name has appeared in Panama Papers and two judges of the Supreme Court have declared his father [PM Nawaz Sharif] a criminal,” Imran said on Wednesday while addressing a ceremony at Chitral University.

“Why a private citizen like Maryam Nawaz is getting official protocol with police saluting her as she goes to appear before the JIT for criminal investigation?,” he asked, adding: “It is responsibility of the investigation team to probe the criminal, who is being presented by the government as innocent.”

Separately, PTI spokesperson Fawad Chaudhry said Maryam Nawaz should have apologised for her ‘lies’ rather than asking the nation to define the allegations for which her family was being investigated.

Questioning the source of earning of Maryam’s husband Captain (retd) Safdar, he quipped that his ‘meager income’ would barely enable her to travel between Mansehra and Islamabad in her own car, let alone live like a ‘Princess of Arabia’.

Fawad said it was the legitimate right of the people to question rulers over methods used by their children to obtain multibillion dollar properties abroad.

“How they [the PM’s children] got super rich in their teens? Did they invent something special? Prime Minister Nawaz Sharif has been running Pakistan like a money making factory. His politics is based on money and corruption,” he said.

Inexplicable why private citizen Maryam getting official protocol with police saluting as she goes to appear before criminal investigation?

The PTI chairman went on to add that “the Pakistani nation must decide once and for all whether we are a democracy or a Badshahat.”

The Pakistani nation must decide once and for all whether we are a democracy or a Badshahat. https://t.co/8kiOHR9XGY

He alleged that the PM had appointed his cronies at the helms of the Federal Board of Revenue, the Securities and Exchange Commission of Pakistan, the Intelligence Bureau and the Federal Investigation Agency to ruin the system.

He said hundreds of people were behind bars in Pakistan on corruption charges. “Was it their fault that they kept their looted money in Pakistan? The rulers accumulated assets worth billions of rupees through looted money and now they are asking for reasons of investigation against them.”

Criticising Finance Minister Ishaq Dar, the PTI spokesperson claimed that Dar’s sons had 20 to 25 billion dirham worth of properties in the United Arab Emirates and owned a fleet of cars costing millions. “They live in a 15 billion dirham villa on Emirates Hill. Dar should tell the nation how they accumulated these assets.”

Meanwhile, PTI leader Shafqat Mehmood said the JIT had every right to summon the PM’s daughter for interrogation. He was talking to a group of journalists at the National Press Club in Islamabad.

“It is surprising that Maryam has questioned the justification of her summons for interrogation but the entire nation knows why she was called,” he said.

He said when Maryam’s husband Capt (retd) Safdar appeared before the JIT, he responded to its questions by saying that his wife knew the details. “This ultimately led to Maryam being summoned by the JIT to respond to those questions. So nobody should be surprised,” he added.

He also urged the Supreme Court to take action against speeches of the ministers who were threatening the JIT members. “The JIT should investigate how Ishaq Dar became a billionaire, how the ruling elite laundered black money and how the London flats were purchased,” he said.

[WITH ADDITIONAL INPURT FROM OUR CORRESPONDENTS IN LAHORE & ISLAMABAD]