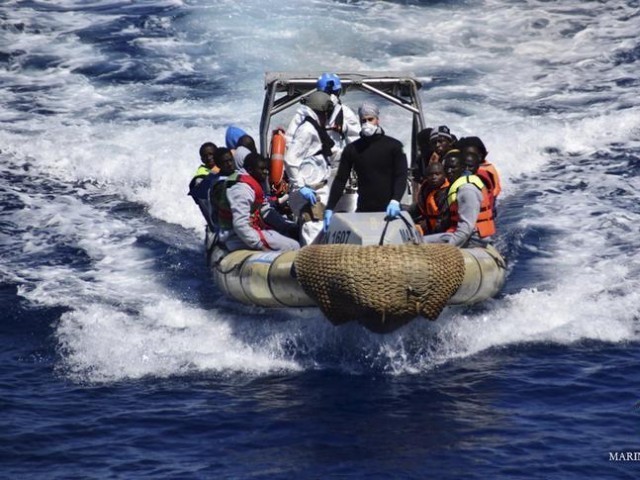 Migrants sit in a rescue boat during a rescue operation by Italian Navy vessels off the coast of Sicily. PHOTO: REUTERS

ROME: Italy’s interior minister called Sunday on other European countries to open their ports to rescue ships ahead of talks with France and Germany on tackling the migrant emergency.

Marco Minniti, who meets his counterparts in Paris later Sunday to prepare for EU talks in Tallinn this week, said in an interview with Il Messaggero daily that “we are under enormous pressure”.

With arrivals in Italy up nearly 19 per cent compared to the same period last year, Rome has threatened to close its ports to privately-funded aid boats or insist funding is cut off to EU countries which fail to help with the crisis.

“There are NGO ships, Sophia and Frontex boats, Italian coast guard vessels” saving migrants in the Mediterranean, he said in a reference to the aid boats as well as the vessels deployed under EU border security and anti-trafficker missions.

“They are sailing under the flags of various European countries. If the only ports refugees are taken to are Italian, something is not working. This is the heart of the question,” he said.

“I am a Europhile and I would be proud if even one vessel, instead of arriving in Italy, went to another European port. It would not resolve Italy’s problem but it would be an extraordinary signal” that Europe wanted to help Rome, he said.

Over 83,000 people rescued while attempting the perilous crossing from Libya have been brought to Italy so far this year, according to the UN, while more than 2,160 have died trying, the International Organisation for Migration says. Italy’s Red Cross has warned the situation in the country’s overcrowded reception centres is becoming critical.

Interior minister Minniti was set to meet counterparts Gerard Collomb of France, Thomas de Maiziere of Germany and European Union Commissioner for Refugees Dimitris Avramopoulos in the French capital. The Italian minister said Rome would be pushing for a way to shift the asylum application process from Italy to Libya, and safely bring to Europe those who win the right to protection.

“We have to distinguish before they set off [across the Mediterranean] between those who have a right to humanitarian protection and those who don’t. And, on the basis of the decisions made by the UNHCR, we must ensure the former depart for Europe while economic migrants are voluntarily repatriated” to their countries of origin, he said.

Unsourced Italian media reports said Rome was likely to call for a European code of conduct to be drawn up for the privately-run aid boats, with the Corriere della Sera saying vessels that did not comply could be “seized”.

Critics have said the NGOs attract traffickers by sailing close to the Libyan coast. The NGOs insist they have no choice, because smugglers put the migrants out to sea in flimsy vessels that sink as they reach international waters.

Rome would like a regional maritime command centre to oversee all rescue operations from Greece to Libya to Spain, which would spread the migrant arrivals between European countries, the Corriere della Sera said. And Italy insists that the EU refugee relocation programme – which is largely limited to people from Eritrea and Syria – should be expanded to include other nationalities, such as Nigerians, La Repubblica said.

Syrian refugees are New York tourists for the day

“While some participating states have showed greater commitment towards relocation, the number of pledges made available continues to be inadequate and implementation remains slow and challenging,” it added.