Bollywood gets inspired ... by Bollywood?

Bollywood gets inspired ... by Bollywood? 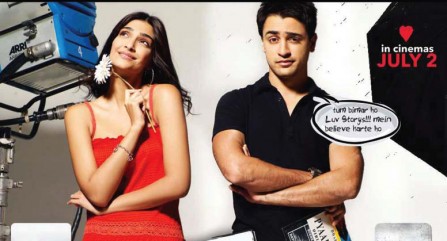 Whether it is the brilliant Andaz Apna Apna (which picked up on characters such as Mr India’s Mogambo and 1970s films’ Robert) or Bachna Ae Haseeno and Dostana, which drew inspiration from Dilwale Dulhaniya Le Jayeinge, it is not strange to see actors use their own dialogues repeatedly. The next film in this vein is the upcoming I Hate Luv Storys, which stars Imran Khan and Sonam Kapoor.

The film’s trailer is voiced by Shah Rukh Khan, and the opening dialogue is exactly similar to… Shah Rukh’s own film Mohabbatein (2000). But unlike the sappy film, only Sonam Kapoor’s character (Simran) is enthused by the idea of love. Imran Khan (Jai) plays a cynic who constantly questions the concept itself. In another scene from the trailer, Jai even makes fun of Simran for loving ‘Raj’ (Shah Rukh’s character name in several romance films) and uses a dialogue from Shah Rukh’s 2008 film, Rab Ne Bana Di Jodi, to tease her.

The film’s characters also work in the Indian film industry, and Khan’s role in particular is said to be inspired by Karan Johar (who produced I Hate Luv Storys). Whether these films make use of the huge realm of material they have as cultural references or just end up spoofing them remains to be seen once it releases, but till then, the trailer is worth watching on YouTube!