Race to turn flying cars into a reality

Race to turn flying cars into a reality

The race to turn these dreams into a realit­y is being run by dozens of creati­ve start-ups
By AFP
Published: June 28, 2017
Tweet Email 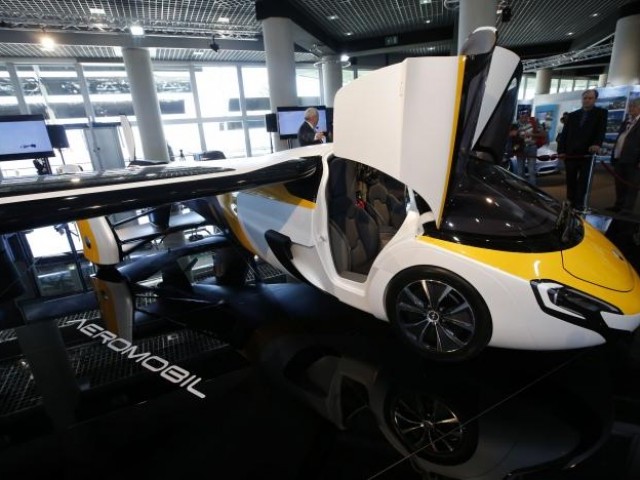 People look at the AeroMobil flying car during its unveiling at the Top Marques Monaco supercar show in Monaco April 20, 2017. REUTERS/Jean-Paul Pelissier

LE BOURGET, FRANCE: Aeronautics giants are treating the idea of a flying car with caution, as such a project raises more questions than it answers, experts say — it’s a child’s dream, a millionaire’s toy. But is it really the next big thing in transport?

At this year’s Paris Air Show, you had to search hard to find an aircraft that looked anything like an automobile: but one such model, the AeroMobil, was tucked away under the old Concordes at the Air and Space Museum, just outside the capital.

This strange-looking hybrid, with its bulbous nose and retractable wings, designed by a Slovakian company, is scheduled to go into series production by 2020.

“After you’ve landed at an airport, you transform the plane into a car and take the road to wherever you want,” Simon Bendrey, AeroMobil’s deputy head of engineering, told AFP. And they have already received a number of orders, he added, despite an asking price of $1.3-$1.8 million.

Tesla to launch semi-truck in September

While flying cars have starred in films including Chitty Chitty Bang Bang and the Fifth Element, the race to turn such dreams into a reality is being run by dozens of small creative start-ups like AeroMobil.

Among those nearest to take-off is the Dutch outfit PAL-V, which is offering a two-seater gyrocopter and is scheduled to be available by next year — a steal at 300,000 euros. Czech company Nirvana Systems says it has had dozens of orders for its mini-helicopter, which can also travel on roads, albeit at rather sluggish ground speeds.

Silicon Valley-based company Kitty Hawk says its Flyer will be on sale by the end of the year. And just last week France’s Pegase, a cross between a ultra-light plane and a mini-car, crossed the Channel, the narrow stretch of water between England and France.

Until recently, flying cars “were a cross between a bad car and a bad plane,” said Bruno Sainjon, head of the French aerospace lab ONERA, on the sidelines of the Paris Air Show. But there has been a quantum leap in design thanks to vast improvements in the power of electric propulsion, linked largely to the rapid advances in drone technology recently.

Today, such engines lift 80-100 kilos (176-220 pounds), Xavier Dutertre, director of the Techoplane project based in Normandy, northern France, told AFP. “And we’re not far from having the capacity to transport one or two men for about 20 minutes,” he added. “In five to 10 years, that will have become commonplace.”

While driving-flying hybrids may initially be the latest must-have gadgets for the ultra-rich, experts believe that such vehicles could actually be rapidly overtaken, as the industry sets its sights on fly-only solutions further down the line.

The real future, said ONERA’s Sainjon is “a system of on-demand air transport, which would clearly be the start of a new era for aviation” — a flying taxi service, in other words.

Flying cars will not be something that just anyone can drive, “because it’s too risky,” Pascal Pincemin, an aerospace specialist with Deloitte, told AFP. He envisaged digital platforms to manage the new form of traffic, and that appears to be what Uber, the App-based ride-hailing service, has in mind with its “Elevate” project.

The idea appears to be to develop a network of electric, vertical-takeoff aircraft and they are aiming to make their first demonstrations in 2020.

Dubai could be the first off the starting blocks with a new kind of small autonomous electric helicopter scheduled to come into operation later this year. There is “a real appetite, a real interest”, in this kind of transport in some of the more traffic-congested cities, said Jean Brice Dumont, head of engineering at Airbus Helicopters.

At the last Geneva motor show, the company presented its own prototype flying car, “Pop Up”, developed in cooperation with a subsidiary of Volkswagen. But Dumont said they were expecting the technology to mature and develop further.

Boeing, so far, has not shown its hand and Deloitte’s Pincemin does not see flying taxis becoming a common mode of transport before 2050. First, he said, the vehicles would have to prove their reliability.

“Will we be prepared to accept levels like those of light aircraft, which are 100 times less safe?” he asked.