It seems killing of innocents in Kashmir means nothing to US: Nisar

Diane De Zoysa, 59, is trapped in Sri Lanka with no money after her husband, hotel worker Priyanjana, 26, was murdered

Diane married Priyanjana after a whirlwind romance during a holiday to Sri Lanka in 2011. She sold her house in Edinburgh and left her job with the council to be with him. PHOTO COURTESY: MailOnline

A 59-year-old British woman, whose young husband was murdered in an alleged blackmail plot, has revealed troubling details of their controversial marriage that has left her trapped in Sri Lanka - saying her husband never wanted sex and turned violent before he was killed.

But after selling her Edinburgh home and quitting her council job to be with him, Diane said he lost interest in her physically - and suspects he was hiding a secret, second wife. 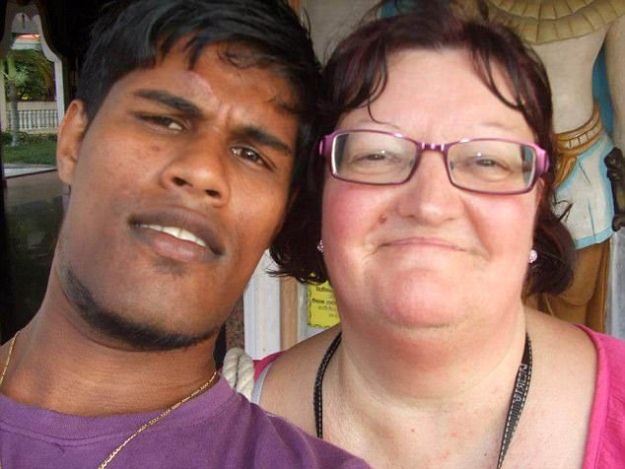 The divorcee - who says she gave her husband about £100,000 in total after selling her house in Scotland - said her dream turned into a nightmare as she was left alone and lonely living in a home next door to his family. PHOTO COURTESY: MailOnline


She said the last few months with Priyanjana, 33 years her junior, who was shot dead last month were 'tough' as he became frustrated and flew into rages.

Indian woman claims she was duped, forced to marry Pakistani at gunpoint

Speaking to MailOnline from Sri Lanka, where she said has been stranded with no money since Priyanajana was shot dead last month, Diane said: "We had sex more when I was here on holiday than when I was living here. After I moved here we didn't do it very often, only nine times last year and once this year."

Diane - who says she gave her husband about £100,000 in total after selling her house in Scotland - said her dream turned into a nightmare as she was left alone and lonely living in a home next door to his family.

She said she now believes the marriage was "all about the money".

"I don't know what happened but he didn't come home as often as I thought he would.

"The last few months were very hard as we argued all the time and he would get angry and smash things.

"He knocked the fan over and it cracked it still works. He threw my CD rack on the floor and it broke. Then he swiped my ashtray and stick holder into the floor and it smashed and it went everywhere. 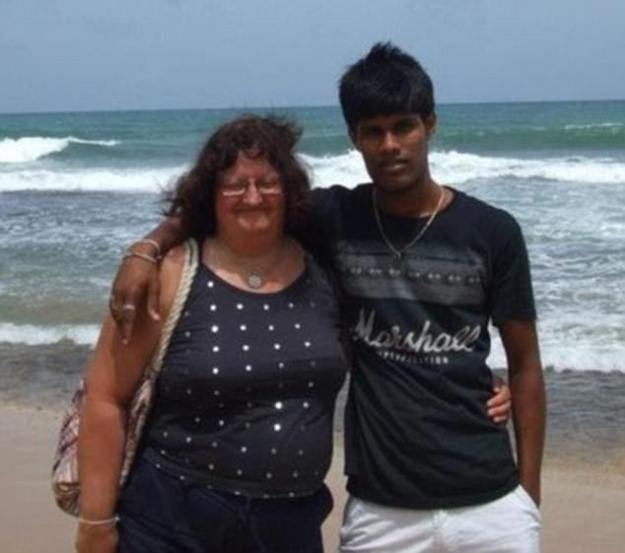 Diane said her young husband was passionate with they first met - but that last year they only had sex nine times as she suspects that he was hiding a secret second wife. PHOTO COURTESY: MailOnline


"He would always threaten to go to Colombo or Dubai to work and not come home. He never did that though. He once said that he would go to work in Korea but never did.

"He never hit me, I was the one who would hit him and slap him as he would mock me and laugh at me.

"It was quite volatile towards the end. I wanted to leave him but I had nowhere to go and no money.

"I didn't want him to die but now I can move on with my life. I have to start all over again. It's not going to be easy, especially if I have no money."

She went on: "I should have realised it was just about the money. My friends thought that he was just marrying me for the money.

"Once I came out here he wanted money all the time."

Diane met her husband in 2011 and married him in Sri Lanka seven months later. She moved to Sri Lanka permanently in February 2015, before returning to Scotland in June, when her husband got a job in the country's capital Colombo.

She explained that she decided to return to the country in September because she 'really missed' her husband.

However, on returning, she was often left at home by herself - despite his family living next door - and was never allowed to go out on her own.

Now, as she languishes in Sri Lanka, desperate to return home, her brother Stewart Peebles said the family urged her not to go.

The former Merchant Navy seaman said: "None of the family here wanted her to go out there in the first place. Family and friends tried to put her off it, she couldn't speak the language and his English wasn't so good.

"She's stubborn and was in love with this guy so she put her house up for sale, left her job and moved out.

"We all told her the age gap was just too much, I think his mum is even a year younger than my sister.

"I think my sister felt boxed in and lonely, she doesn't know the language, she doesn't have many friends out there and it isn't exactly a safe area for her to go out on her own."

He continued: "She's gutsy and seen this move as a big adventure, but she hid from me until a year and half before she moved because she knew what I would say, what we all would say; he wants one thing and one thing only, and that's your money." 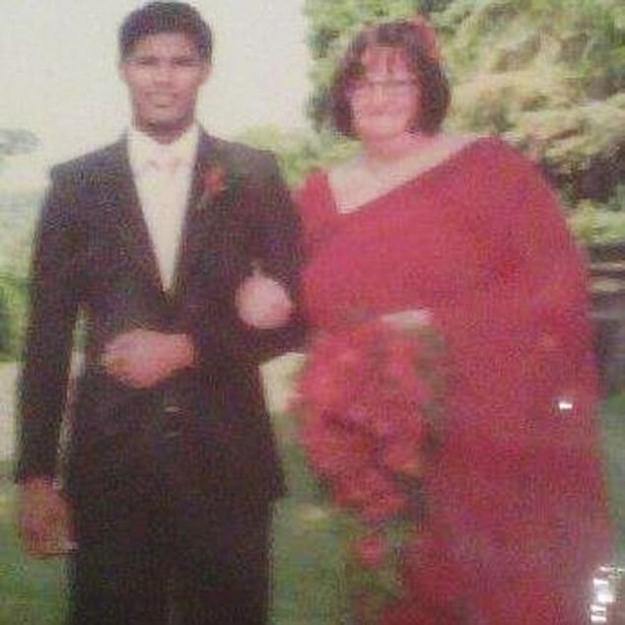 The pair had met when she was on holiday in the country six years ago. Diane (pictured on her wedding day) returned seven months later and married the hotel worker. PHOTO COURTESY: MailOnline


Priyanjana was murdered last month at a friend's house. Diane says she believes her husband was shot dead by men trying to blackmail him for money.

Diane said: "From what I've been told two men turned up on mopeds looking for him. They shot him three times, twice in the chest and once in the stomach.

"His friends took him to hospital but he died straight away. A woman came round and told me he's dead, he's been shot.

"They blackmailed him. He did give them some money but they wanted more. Because they didn't give him more, they shot him. They must have gone looking for him."

The widow says she is currently unable to return to her native country due to her financial situation and believes that her husband's family now want to keep the money she handed over. 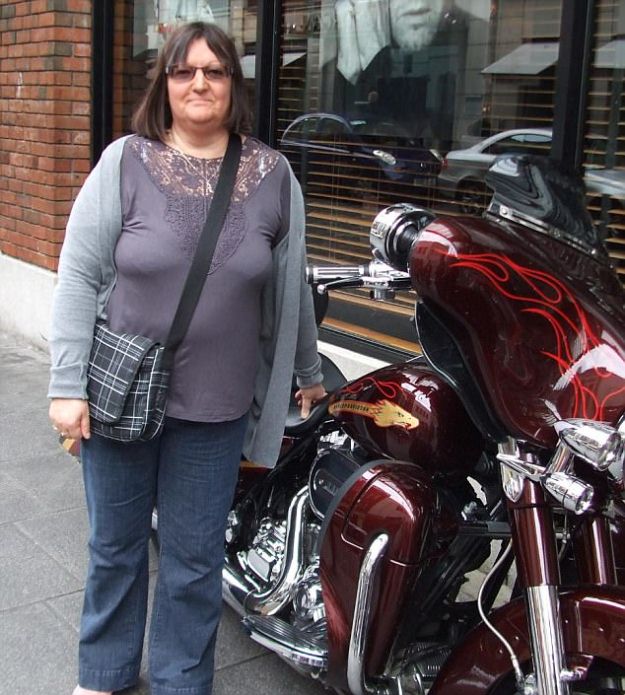 Diane is now trapped in Sri Lanka with no money. PHOTO COURTESY: MailOnline


She told MailOnline she now "regrets" her decision to move out to Sri Lanka.

"I do regret coming back out here after what's happened and how he treated me,' she said. 'I want go back to Scotland. My life now is so lonely."

She says she has been in touch with the British Consulate in Colombo and is attempting to establish her rights.

Two men are understood to have been arrested in connection with her husband's death.

A Foreign and Commonwealth office spokesman said: "Our High Commission in Sri Lanka is providing assistance."

omar anis | 4 years ago | Reply she fell in love, had a wonderful 5 years, had sex which she couldn't dream about in UK, living in tropical paradise. The poor girl must be sad if she had no part in his death, all marriages go through rocky patches, especially with age difference, living in a new country. maybe her sex life would have improved too. question is would she be marrying again there soon? she should, its a lot better life then miserable Scotland.
desi | 4 years ago | Reply Poor lady, she sounds so lonely and naive. Karma got to him, I can't feel sorry for the way his life ended .
VIEW MORE COMMENTS
Amer | 4 years ago | Reply Scam ? Are you questioning the wisdom of the reader ? Get real ET !
Atsul | 4 years ago | Reply Very good end of this SOB, he should have died a worse death as a lesson to others for manipulating, betraying and robbing this sincere and innocent lady.
Jamal | 4 years ago | Reply Marrying the guy was the mistake, why buy the bull when you can use it on lease?
Ch. Allah Daad | 4 years ago | Reply She had best time of her life for a small amount. It was a great deal in which both parties got what they wanted. No sympathy with either.
NoName | 4 years ago | Reply I am still not sure what kind of scam she is involved in. Just does not make any sense, a Brit loosing money without any gain and the man has lost his life. Poor fella, looks decent to me.
Bunny Rabbit | 4 years ago | Reply anything happens to me happens only because of me . she should have thought twice about marrying a man much younger than her that too from a foreign culture .
Kolsat | 4 years ago | Reply If she had looked at herself in the mirror she would have realised that this Sri Lankan man was marrying her for two reasons namely money and possibility of obtaining the British citizenship and with it entry into its welfare state. These lonely women should realise that these men though they cannot speak English know all the perks provided by western countries.
Replying to X
Saved ! Your comment will be displayed after the approval.
Error !
Error! Invalid Email.

From Swabi to Kurram: story of a woman kidnapped and sold thrice for marriage