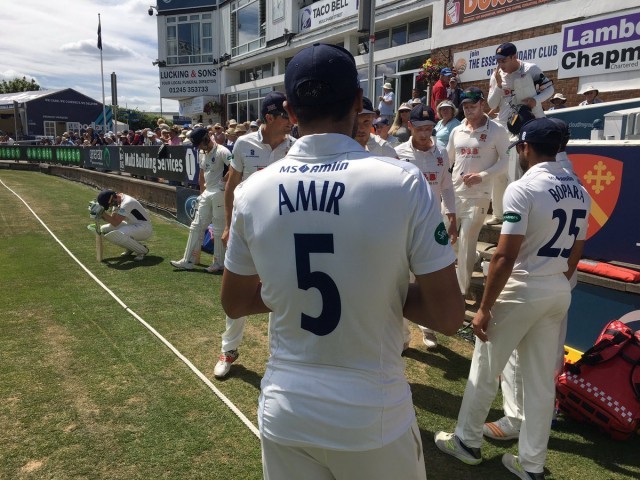 Amir trapped Middlesex Nick Gubbins lbw as the latest round of county championship matches got underway on Monday, and later also claimed the wicket of wicketkeeper batsman John Simpson.

By the end of the day’s play, Amir’s Essex team were in commanding position after scoring 106 without loss in reply to Middlesex’s 246.

The new day/night format led to the use of the pink ball with a black seam — ideal preparation for England’s Test players for a match with the West Indies from August 17-21 at Edgbaston.

Domestic cricket history was also made in Glamorgan’s game with Derbyshire as the latter’s 16-year-old Afghan-born spinner Hamidullah Qadri became the first player born in the 2000s to play Championship cricket.

Floodlit cricket is not totally new to England as it first came to their shores on July 23, 1997, in a limited overs match between Warwickshire and Somerset at the same Edgbaston ground where the Test match will take place.

…and here it is! @iamamirofficial gets his first Essex wicket with Gubbins out lbw. #ESSvMID pic.twitter.com/eNZ08UN7hI

The county championship has had one day night game in 2011 between Kent and Glamorgan but got mixed reviews from the players and attendance was not impressive.

England bowling great James Anderson believes batsmen will not particularly like the experience.

“I’ve had no experience with pink balls. I don’t think the batsmen are hugely in favour of it,” said Anderson before play got underway.

“All the reports I’ve heard of day-night Test matches are that the twilight period is really difficult to bat in.

However, Anderson and his fellow bowlers may not have things all their own way as England and Wales Cricket Board’s (ECB) director of cricket operations Alan Fordham told BBC Radio.

“If people are expecting it to behave in the same way as a red ball, they’ll be disappointed,” said the 52-year-old former Northamptonshire batsman.

“The easiest way to describe it is the pink ball is manufactured in the same way as a white ball, so it’s not a ball that is easy to shine.

“You can perhaps get a little bit of a sheen on it but nothing like a red ball where you can get a really good polish on it, keep that lasting well and perhaps swinging into 40 or 50 overs. That’s unlikely to happen.”
Surrey vice-captain Rory Burns offered a more upbeat tone than Anderson.

“It’s an exciting, different challenge. We’ve been practising with the pink ball and getting used to it,” he told BBC Radio.

“It’s a very different ball to the red ball, in how it reacts and the seam on it. With spin, you can’t quite see the seam. That’s one of the challenges.

“It feels a little bit lighter off the bat. The tougher periods will be when the floodlights come into play.”

Imad Wasim rises to number one in ICC T20I rankings