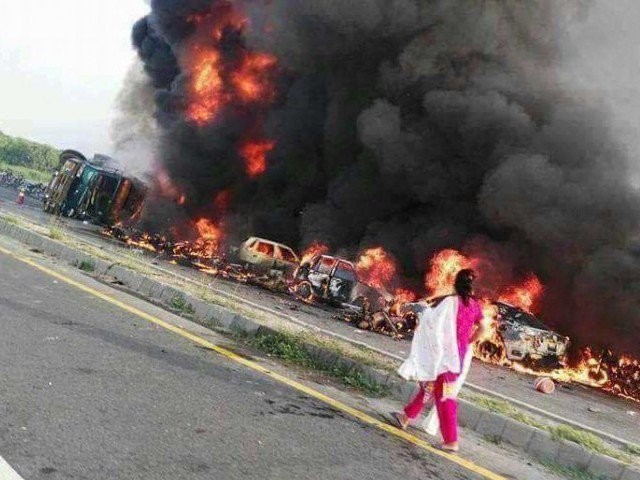 LAHORE: Thousands of messages of sorrow and condolences poured on social media over the tragic incident in Bahawalpur, where at least 148 people were killed and 200 injured when an overturned oil tanker exploded.

Many social media users also critised the provincial government over the lack of burn units in the southern part of the province as the news of shifting the injured to other districts came in.

In the early hours of Sunday, an oil tanker overturned near Bahawalpur in the area of Ahmadpur East on KLP Road. People in the area gathered to collect the leaking fuel, which caught fire leaving several casualties and many others with severe burn wounds.

According to medics, as many as 50 people received severe burn wounds and were in critical condition.

In the explosion, as many as 75 motorcycles and several other vehicles were burnt.

Meanwhile, Punjab Chief Minster Shehbaz Sharif visited the injured and inquired about the medical facilities being provided to them.

However, the provincial government was criticised for its policies and the lack of medical facilities particularly in Bahawalpur, southern Punjab. People took to social media to express their sentiments over the incident.

On user wrote, “Nawaz would rather build another metro to shift patients to other cities rather than building burn centres and hospitals there”.

An angry social media user wrote, “South Punjab has no medical facilities to deal with such a calamity. Humans are not a priority for PML-N and PPP.”

Messages for condolence and support poured in for the victims from all over the world. A condolence message by the British High Commission in Pakistan said, “Shocked and deeply saddened by the awful tragedy near #Bahawalpur.

Our thoughts are with those affected and their families”. The US Embassy said, “Our deep condolences to the families and loved ones of the victims”.