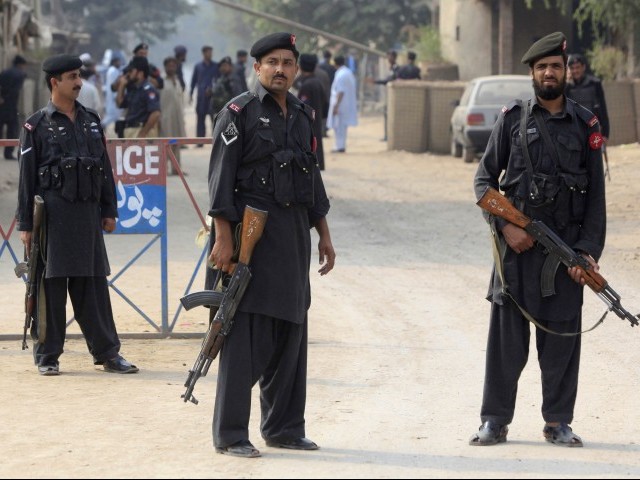 Policemen stand guard in Shahpur village, Peshawar on Saturday, June 24, 2017 where a hideout of suspected terrorists was raided. PHOTO: Reuters

Law-enforcement agencies raided the hideout of the terrorists at a flour mill on Dalazak Road in the morning and the gun battle lasted for over six hours.

Some terrorists managed to escape and one injured in the shootout was arrested.

Speaking to The Express Tribune, SP Furqan confirmed that one of the terrorists killed in raid was Arif. “He [Arif] was an important commander of the Islamic State  in K-P,” he added.

Capital City Police Officer (CCPO) Peshawar Tahir Khan told reporters that the operation was conducted jointly by police and the Pakistan Army. They were tipped off that the terrorists were hiding at a flour mill and planning to carry out terrorist attacks on Eidul Fitr.

“The gun battle lasted for six hours in which two terrorists were killed,” the CCPO said.

“Three policemen and two army soldiers were also injured in the exchange of fire,” he added.

“A large quantity of explosives, AK 47s and material used in assembling improvised explosive devices were found at their hideout.”

The official said the terrorists were affiliated with the terrorist organisation Islamic State and had completed their preparations for terrorist attacks in the city with the help of videos of their intended target sites.

“They were planning to target an Eidgah on Eid. It’s a major success that the security forces have foiled their plans,” the CCPO added.

The policemen injured in the shootout were SHO Gulbahar Omar Khan, Anti-Terrorist Squad Inspector Ziaullah and constable Arshad. They were admitted to the Lady Reading Hospital.

The police said the terrorists were using residential quarters in the abandoned flour mill which was closed for the past decade.

There were five women also living there including Arif’s wife and four children.

Hundreds of policemen and army soldiers participated in the raid.

Arif was the head of Islamic State in K-P and a seasoned militant.

He was previously affiliated with the Haqqani network and the Tehreek-e-Taliban Pakistan (TTP) Darra Adam Khel and Mohmand fatcion.

He had joined Islamic State around two years ago and set up its organisational structure in K-P and Fata.

He went to Saudi Arabia in 2007 and was radicalised there. After returning, he went to Afghanistan and enlisted himself as a suicide bomber. But as there were 400 other would-be suicide bombers in queue before him, he ran out of patience and returned to Peshawar.

He joined the Lashkar-e-Islam and then the TTP Darra Adam Khel, excelling in target killings.

He was once the most feared target killer in Peshawar and yet the K-P police were unaware of his name. He ran out of luck in 2016 when one of his group members killed an Intelligence Bureau inspector, Osman Gul. The police then out about Arif and that the Islamic State was running a sophisticated network in K-P.