A toilet is being constr­ucted, a road is being built and commun­ity hall will also be built in the villag­e
Published: June 24, 2017
Tweet Email 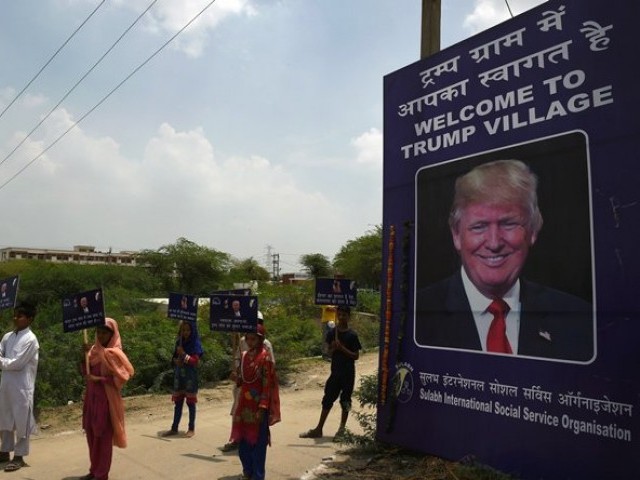 Indian children hold placards by the entrance gate of Marora village, which has been unofficially renamed 'Trump Village," about 100km from New Delhi, on June 23, 2017. PHOTO: AFP

A toilet charity has renamed an Indian village after US President Donald Trump as part of a promotional push to raise cash and support for better sanitation.

Aid group Sulabh International, which says it has built 1.5 million toilets across the country, has set up “Trump Village” signs around the small community in the northern state of Haryana, each bearing a grinning portrait of the president. Neither the White House, nor the Trump family’s commercial empire, has given permission for the rebranding of the village, still better known locally as Marora, the charity said.

“Trump Village” unveiled in India ahead of Modi US visit

But founder Bindeshwar Pathak said he hoped the gesture would win enough publicity and good will to at least raise awareness of a major social problem. “Such a step might spur rich people, companies and other donors to come forward and donate money,” he said. “Once basic infrastructure is built here, the popularity of this village will grow and it will act as a motivational factor.”

The change is purely symbolic – the name Marora will continue to appear on maps and signs. But locals said they were prepared to embrace the new title, Trump Sulabh Village in its full form, and any good things it brought with it. “All our problems such as electricity and water will be addressed by renaming,” said resident Mohammed Joharuddin. Village head Shaukat Ali also played along, saying he was
grateful for the charity’s work.

As Modi prepares for Trump meeting, US expected to OK India drone purchase

“A toilet is being constructed, a road is being built and community hall will also be built in the village,” he said. The event was organised as Indian Prime Minister Narendra Modi prepares to fly this weekend for his first meeting with Trump in Washington. The US embassy in New Delhi said it was aware but referred further inquiries to Washington.

Fewer than a third of India’s 1.3 billion people have access to sanitation. The United Nations estimates that half the population
defecates outside – putting people at risk of cholera, diarrhoea, dysentery, hepatitis A and typhoid.