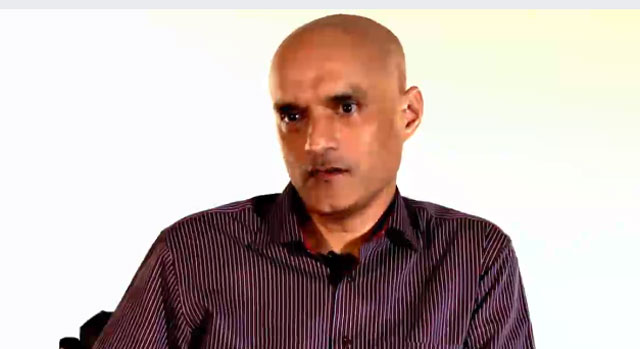 ISLAMABAD: Indian navy officer turned spy Kulbhushan Jadhav – who was sentenced to death on charges of terrorism, espionage and sabotage – has filed a mercy petition to army chief General Qamar Javed Bajwa while admitting his crimes once again in a fresh confessional video.

“In his plea, Commander Jadhav has admitted his involvement in espionage, terrorism and subversive activities in Pakistan, and expressed remorse at the resultant loss of many precious innocent lives and extensive damage to property due to his actions,” Inter-Services Public Relations (ISPR) said on Thursday.

The military’s media wing released a video of Jadhav’s second confession alongside that statement.

“After having spent time in Pakistan, today I genuinely feel very ashamed and genuinely seek pardon for the sins and crimes I have committed against the nation and people of Pakistan,” Jadhav said in the video which contained details of the activities and operations he organised and carried out to destabilise Pakistan.  He requested the army chief to spare his life on compassionate grounds.

Jadhav, in the video, also admitted he was provided a defence counsel during his case before the Field General Court Martial, discrediting India’s claim that the Research and Analysis Wing (RAW) agent was not allowed due process. Delhi has moved the International Court of Justice (ICJ) against Jadhav’s execution and obtained a stay till the hearing concludes.

The Indian spy had earlier filed an appeal with the Military Appellate Court which was rejected. Under the law he is eligible to appeal to the army chief for clemency. If his appeal is turned down, he can also seek mercy from the president of Pakistan.

The serving Indian naval officer, who was arrested on March 3 last year during an operation in Mashkel area of Balochistan, had earlier appealed to the Military Appellate Court, which was rejected.

In his latest confessional video, Jadhav provided detailed insight into his and RAW activities in Pakistan and their role in terrorist attacks in the country.

Introducing himself as Commander Kulbhushan Sudhir Jadhav alias Hussain Mubarak Patel, he began with how he was inducted into RAW and what tasks he was assigned.

“RAW officials had started sniffing that the Modi government will be in power by 2014. So I was inducted and my services were handed over to RAW. The aim was to see that all the activities around the Makran Coast, Karachi, interior Balochistan, Turbat and Quetta were organised and coordinated nicely,” the RAW agent said.

“I had visited Karachi on two occasions in 2005 and 2006 to gather basic intelligence on naval installations. Basically I was gathering information on landing sites around Karachi and various naval vessels [in the Pakistan Navy fleet].”

Jadhav execution on hold until ‘ICJ hearing is over’

“Subsequently, me along with Anil Kumar had a meeting with Alok Joshi wherein the plans for activities along the Makran Coast and Karachi were finalised. I was stationed in Chahbahar under a fictitious name ‘Hussein Mubarak Patel’ and ran a business there by the name of Kaminda Trading Company,” he added.

“It was a discreet non-embassy-based operation exclusively meant to conduct meetings with Baloch insurgents and terrorists,” Jadhav said. “The aim of these meetings was always to see that the aims and targets of RAW to conduct various terrorist activities within Balochistan were conveyed properly to the insurgents and any kinds of requirements they had were conveyed back to RAW officials.”

“Balochistan doesn’t have a movement on the sea, so the aim was to raise within the Baloch sub-nationals a sea front, so that the activities could be properly coordinated from the sea side and subsequently taken further inwards, may be to Quetta or Turbat or interiors of various places. The subsequent activities which were then handed over by RAW when I subsequently started working for it, the main aim was focused on Balochistan and the Karachi region. The idea was to see to it that the sub-nationals in this region were facilitated and supported financially and with arms and ammunition, and some kind of maybe man and material movement also across the coast.”

“Me being a naval officer, I was given the task of seeing how they could be landed across the Makran coast, between Gwadar, Jiwani or whichever suitable points were there across this belt. And the main ideology behind this was that the economic and various activities which go along the CPEC region between Gwadar and China had to be distorted and disrupted and destabilised so that the aim was to just basically raise the level of insurgency within Balochistan and the Karachi region,” Jadhav admitted.

“RAW through Mr Anil Kumar has been abetting, financing and sponsoring a lot of activities within Balochistan and Sindh. The entire Hundi and Hawala operations are undertaken from Delhi and Mumbai via Dubai into Pakistan and during one such important transaction, $40,000 were transferred to Baloch sub-nationals via Dubai,” he said.

“Also the finances which are coming into Balochistan and Sindh for various anti-national activities are coming through consulates in Jalalabad and Kandahar and the consulate in Zahidan,” the captured RAW agent said, confirming Pakistan’s fears of India exploiting Afghanistan to harm Pakistan. “These are very important consulates which are used by RAW to transfer dollars to the Balochistan movement.”

“RAW and Mr Anil Kumar on behalf of RAW have been sponsoring regularly the various terrorist activities within Pakistan. Especially Hazaras and Shia Muslims who move around on pilgrimage between Iran, Afghanistan and Pakistan were basically to be targeted and killed. This was already being done but the level had to be raised so that the movement completely stops.”

“Then the various workers of FWO who were constructing various roads within Balochistan were targeted. The third major activity was IED attacks which were being carried out by the Baloch sub-nationals within Quetta, Turbat and other cities of Balochistan. They were being directly sponsored by RAW,” Jadhav added.

“Mr Anil Kumar has been sponsoring sectarian violence across Sindh and Balochistan and also sponsoring various assassinations across this same region so that instability or some kind of fear is set into the mindsets of the people of Pakistan. In one such process, SSP Chaudhary was assassinated. This was directly mentioned by Mr Anil Kumar to me.”

“The financing of TTP and various other Afghan anti-Pakistan terrorist groups led to the attack by TTP on one of the Mehran naval bases in which a lot of damage was inflicted upon the Pakistani Navy,” Jadhav said.

“One of the operations which was being planned by RAW officials along with Baloch insurgents was a military-style attack on the Pakistani consulate in Zahidan. The aim was to either attack it with a grenade or some kind of RPG or IED. It was being militarily planned and the RAW officials involved were in Iran.”

“RAW also sponsored the setting up of a modern website through Nepal to lure people from Pakistan for various activities,” he added.