Will result in invest­ment of $372m; Lucky Cement, United Motors and Nishat Group among those given permis­sion by govt
By Shahbaz Rana
Published: June 21, 2017
Tweet Email 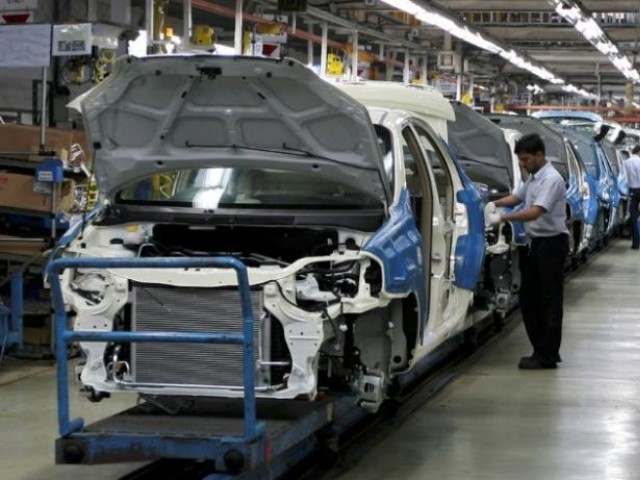 All three companies would separately enter into agreements with Ministry of Industries and Production to ensure compliance conditions of the Automotive Development Policy 2016-21. PHOTO: REUTERS

ISLAMABAD: The government took a huge stride towards shaking up the Japanese-dominated automobile industry, granting permission to three new, but non-European, companies to set up their car assembly plants in Pakistan.

The companies in collaboration with local partners will invest $372 million to set up the assembly/manufacturing plants.

The Ministry of Industry and Production allowed United Motors Private Limited, Kia-Lucky Motors Pakistan Limited and Nishat Group to set up units for assembly and manufacturing of vehicles under the Greenfield investment category, Ministry of Industries Secretary Khizar Hayat Gondal confirmed to The Express Tribune.

He said that these companies would bring in foreign investment worth $372 million. The maximum investment of $190 million will be made by Kia-Lucky, followed by $164 million by Nishat Group and $18.1 million by United Motors, he added.

As many as nine companies had sought permission to set up manufacturing plants but only three could got the approval in the first phase. The secretary said that the documents of other applicants are being scrutinised.

The decision comes days after the Prime Minister’s Office decided to abolish the Engineering Development Board (EDB) on allegations of corruption and creating hurdles in the way of setting up new car manufacturing plants in Pakistan.

“The government of Pakistan is pleased to award the Category-A Greenfield Investment Status to United Motors (Pvt) Limited for assembly/manufacture of vehicles covered in the exclusive contract agreement,” according to a notification issued by the Ministry of Industry. Similar notifications have also been issued to two other companies.

These firms had submitted detailed business plans and relevant documents to the EDB for assessment. United Motors would set up a plant with Chinese collaboration. The Nishat Group will be in partnership with South Korea-based Hyundai Company and Lucky Cement would also collaborate with another South Korean firm, Kia Motors.

In the hope of attracting a European carmaker, the government in March last year had approved a new automobile policy, offering tax incentives to new entrants to help them establish manufacturing units and compete effectively with the three well-entrenched assemblers.

The Board of Investment had claimed that European car manufacturer Renault was keen to set up a car plant in Pakistan and the government was holding negotiations with them. However, sources said that neither Renault nor Volkswagen submitted applications for setting up plants in Pakistan.

Gondal hoped that once the automobile policy takes roots, the European brands would also come forward. Another meeting of the Auto Industry Development Committee is expected to take place after Eid to review more applications.

However, in violation of the automobile policy, the federal government did not cut custom duties on import of completely built units (CBUs) by 10% from July 1, 2017.  Such reversals discourage foreign investors who seek consistency in policies in return of long-term commitments.

A senior official of Lucky Cement confirmed to The Express Tribune that the company has been given permission to set up a plant in Pakistan. Lucky Cement would have 60% share in the joint venture and will invest $150 million, he added. The new venture will also market and sell, besides import and export of all types of Kia vehicles, parts and accessories.

All three companies would separately enter into agreements with Ministry of Industries and Production to ensure compliance conditions of the Automotive Development Policy 2016-21. The EDB will issue manufacturing certificate and list of importable components to new investors after verifying that the manufacturing facilities established by the firm are adequate to produce roadworthy vehicles.

The three new players are expected to shake up the Japanese-dominated car market and loosen the grip of Toyota, Honda and Suzuki.

Nishat Mills Limited would assemble vehicles with Hyundai Company. The two companies together will set up a Greenfield project for assembly and sales of HMC passenger and 1-ton range commercial vehicles in Pakistan.

Under the new automobile policy, the government has allowed one-off duty-free import of plant and machinery for setting up an assembly and manufacturing facility. It has also permitted import of 100 vehicles of the same variants in the form of completely built units (CBUs) at 50% of the prevailing duty for test marketing after the ground-breaking of the project.

A major incentive for the new investors is the reduced 10% customs duty on non-localised parts for five years against the prevailing 32.5%.

Similarly, localised parts can be imported by new entrants at 25% duty compared to the current 50% for five years. A-category investors will be entitled to import of 100% parts at 10% customs duty for a period of three years in respect of passenger cars below the 800cc category.

They will also be entitled to import of 100% parts at prevailing custom duties applicable to non-localised parts for a period of three years in respect of buses, trucks, tractors and prime movers.

China dominates as FDI increases 154% in May