US working to relaunch military hotline with Russia

US working to relaunch military hotline with Russia 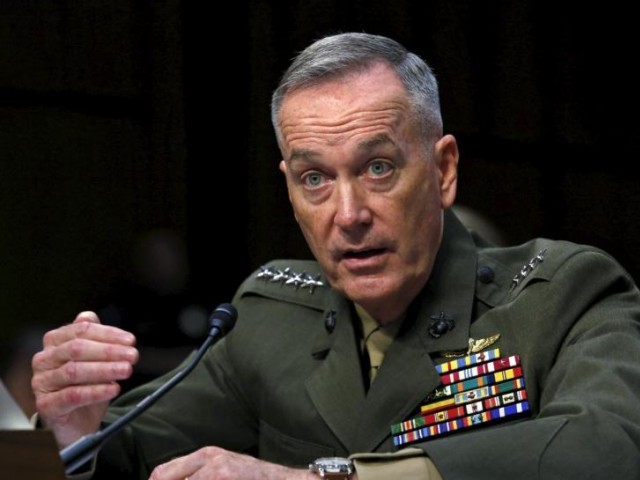 WASHINGTON: The United States wants to re-establish a military hotline that Russia said it had severed after an American jet shot down a Syrian regime warplane, the top US general said Monday.

The so-called “deconfliction” line has been a vital tool in protecting both sides’ forces as they conduct separate campaigns in Syria’s crowded battlespace.

“We will work diplomatically and militarily in the coming hours to re-establish deconfliction,” said General Joseph Dunford, chairman of the Joint Chiefs of Staff, referring to the special communications channel.

Despite tough talk, Turkey caught between US and Russia in Syria

Russia’s defense ministry earlier said it would halt its use of the incident-prevention hotline after US forces downed a Syrian jet, though Dunford noted it had remained in use “over the last few hours.”

Russia also warned that its air defense systems would begin tracking all US-led coalition aircraft in central Syria, prompting the Pentagon to move some of its planes.

“We have taken prudent measures to re-position aircraft over Syria so as to continue targeting ISIS forces, while ensuring the safety of our aircrew, given known threats in the battlespace,” Pentagon spokesperson Major Adrian Rankine-Galloway said, using an acronym for the Islamic State group.

White House spokesperson Sean Spicer said, “We are going to do what we can to protect our interests,” adding that the United States would keep an open line of communication with the Russians.

Moscow has previously threatened to scrap the deconfliction line, after an April 7 US cruise missile strike on a Syrian regime airbase in retaliation for a suspected chemical weapons attack against civilians.

The line has been a lifesaving — albeit imperfect — tool since it was set up soon after Russia entered Syria’s civil war in late 2015 to prop up President Bashar al-Assad.

The hotline was established between US officers monitoring the war from an operations center at a base in Qatar and their Russian counterparts operating in Syria.

If Moscow does indeed abandon the hotline, it could dramatically raise the risk to pilots and ground forces on all sides.