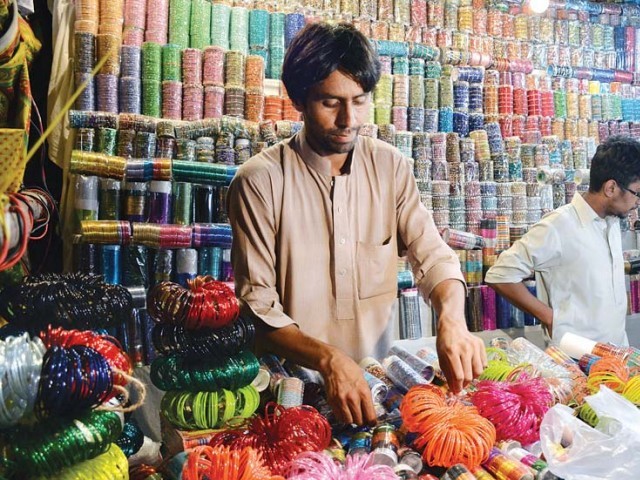 The markets spring up around the last couple of weeks before Eid. PHOTOS: EXPRESS

LAHORE: With Eidul Fitr just round the corner, shopping spree is in full swing despite high prices and inflation as all city markets have been flooded with men, women and children.

Colourfully decorated stalls have been set up everywhere in markets and commercial centres to lure the customers. A stall vendor in Liberty Market said shoppers were interested in buying clothes and shoes, while jewelry, cosmetics and other fashion accessories in showcases and makeshift stalls were the focus of attention of women and girls.

A shopkeeper, Muhammad Islam, said sales have started boosting up for the past couple of days, which would reach its peak on Chand Raat (the night before Eid), when last-minute shoppers would visit markets. He said shoppers had been flocking city markets and shopping malls not only from provincial capital but also from adjoining areas and cities.

A citizen, Ansar Kaleem, who was standing outside a women footwear outlet, said Eidul Fitr was one of the biggest religious festivals of Muslims around the world, but when it comes to Eid shopping, women and children were always ahead. “I am waiting here for my spouse and daughter who are trying to find some matching shoes or sandals for their Eid dresses. I have already bought a couple of suits, pants, shirts and a pair of new shoes for Eid,” he said.

Pointing towards a cluster of street stalls offering bangles, imitation jewelry and other fashion accessories, a young shopper, Muneeba, said huge variety of products were available for sale in all city markets. “A sea of people and such a large collection of items have made shopping difficult for many. I am trying to buy some nice earrings and matching bangles for Eid day. I have visited nearly a dozen shops and stalls but could not decide what to buy. All the products are attractive and unique,” she remarked.

A middle-aged woman, Kishwar Bibi, complained that most shopkeepers were charging high prices to fleece citizens. She pointed out that most of the vendors had displays ‘SALE’ signs in front of their shops but in reality prices were far above normal. “Common citizens are the main victims of poor governance, inflation and profiteering,” she said.

“Earlier, citizens were fleeced right, left and centre by greengrocers and now people were being victimised by shopkeepers. It has all happened due to the negligence of rulers and the state machinery,” she lamented.

Similar remarks were made by several other shoppers. They said inflation has badly affected their purchasing power. Several parents complained that the prices of children’s garments were really high as compared to previous year and rate of inflation.