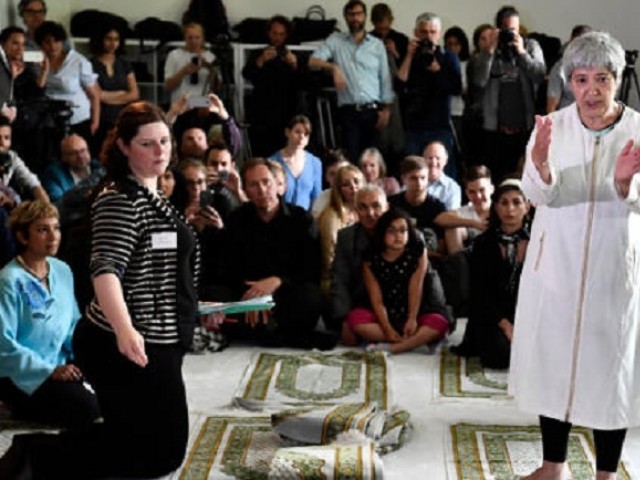 BERLIN: With a mission to spread a liberal form of Islam, a mosque where men and women pray side by side has opened its doors in Berlin, complete with female imams.

The Arabic phrase “Allahu Akbar” (‘God is great’) resonated through the crowded Ibn Rushd Goethe Mosque on Friday, as Malaysian-American Ani Zonneveld, one of the world’s few female imams, launched the call to prayer.

Then one of the founders of the new place of worship, lawyer and women’s rights activist Seyran Ates, opened the event with words of welcome before Christian and Jewish guests and a large media contingent.

“We want to send a signal against terror and the misuse of our religion,” said Turkish-born Ates, 54, dressed in a long white robe. “We want to practise our religion together.”

Ates — no stranger to breaking taboos, having called for a “sexual revolution” in the Muslim world – vowed she would not allow ultra-conservatives “to rob me of my right to be Muslim”.

Kneeling on green carpets, the faithful – men and women, side by side – bowed to Makkah for the traditional prayer as the imam spoke in German.

Some of the women wore veils or head coverings, others did not.
The new mosque, the 88th in the German capital, is located in a rented room on the third floor of the Protestant Johanniskirche building.

All Muslims – Sunni or Shia, Alawite or Sufi – are welcome in the mosque named after one of Germany’s greatest writers, Johann Wolfgang von Goethe, and 12th-century Islamic scholar Ibn Rushd, also known as Averroes.

The seven founding members said they want to open their prayer hall to all groups, including gays and lesbians.

“This mosque allows Muslims to define themselves in a new way,” said co-founder and German Islam scholar Abdel-Hakim Ourghi.

He added that “we will try to depoliticise Islam”, as the religion was being torn by rival political movements. “Because religion is a private matter.”

Police stood guard outside the entrance of the building. The founders said they had not received any threats or insults, but that they fully expected not everyone would be happy.

Germany, with some four million Muslims, has been the target of jihadist attacks, the deadliest last December when a truck tore through a Berlin Christmas market crowd killing 12 people.
The arrival of more than one million refugees, most from mainly Muslim countries, since 2015 has worsened the fears of some Germans.
Blaze guts Texas mosque vandalised years ago

Ates — who has campaigned against forced marriages, domestic violence and so-called “honour killings” among Muslim migrants – said the project was eight years in the making.

“Many left along the way,” she said. “They told us it was dangerous, that they were afraid.”

Elham Manea, a Swiss political scientist of Yemeni background, said the time had come for change, with other so-called liberal mosques having also opened in the United States, Britain and Switzerland.

The Berlin mosque, financed by private donations, is located in the Berlin district of Moabit, which has a large immigrant population.

It was in this neighbourhood that Tunisian Anis Amri, the Christmas market attacker, frequented a radical mosque that has since been closed.