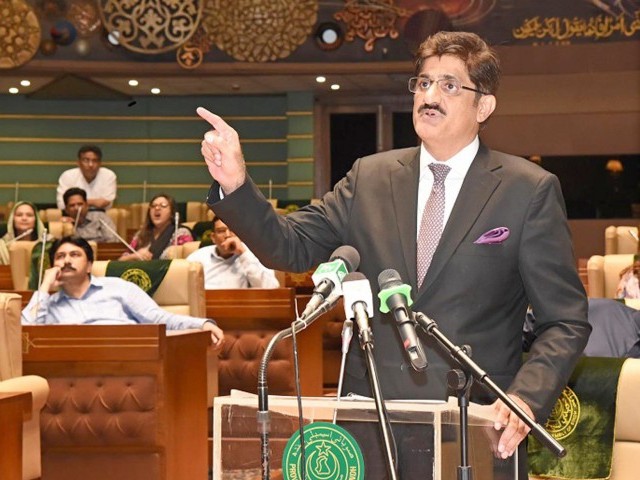 KARACHI: The Sindh government passed on Friday the Rs1.04 trillion budget, rejecting all 732 cut motions moved by opposition members to reduce non-development expenditure. The budget for the fiscal year 2017-18 was presented on June 5 with a deficit of Rs14.3 billion and was discussed by more than 100 MPAs belonging to all parliamentary parties. All opposition members rejected the budget and finance bill, which was passed with the majority votes of the treasury benches.

During the session, which was chaired by Deputy Speaker Shehla Raza, the opposition members demanded reduction in funds allocated for the expenditure of Chief Minister House and Governor House. They also demanded that funds allocated for the chief minister’s helicopter, furniture and vehicles to be purchased for ministers be reduced yet the government passed the budget.

“I request you to please set a precedent and reduce the amount of expenditure of Chief Minister House,” said Saifuddin Khalid of the Muttahida Qaumi Movement (MQM), while moving a cut motion. He also demanded the budget allocated for the chief minister’s helicopter be slashed. “You have allocated Rs10 million for the repair of the helicopter. I request to please cut at least a million from this,” he said.

Responding to him, Chief Minister Murad Ali Shah, who also holds the portfolio of finance minister, justified that they have already reduced the chief minister’s non-development expenditure from Rs2.5 billion to Rs9.4 million. “As far as my helicopter is concerned, we repair it from the Civil Aviation Authority and this budget is nominal for it, which cannot be further cut,” he said.

The upcoming budgetary estimates for the year 2017-18 reflected an increase of 19.6% over the outgoing year’s estimates of Rs869 billion.  In the upcoming budget the government has allocated a total of Rs344 billion for the annual development portfolio, which includes the district budget and foreign funds.

The CM also announced a 15% increase in the basic salary of all government employees in the budget and introduced a health insurance card for 10,000 government employees at the Sindh Secretariat. During the debate, most of the opposition members focused on the CM’s helicopter, which, according to them, has become a white elephant. “This helicopter is also being used by the chief minister and other Pakistan Peoples Party leaders for wedding ceremonies. I hope this will not be misused again,” remarked Pakistan Muslim League – Nawaz MPA Sorath Thebo.

Heer Soho of the MQM also raised this issue and asked why this amount had been allocated for the helicopter. Shah replied that the helicopter was purchased in 1992, when the PPP was the opposition party in the province. “The helicopter is old and we aren’t purchasing a new one because of financial constraints. No one misused it,” he clarified.

Pakistan Muslim League – Functional’s Nusrat Seher Abbasi said the people of Sindh had high hopes of the incumbent chief minister who has failed to deliver. “We thought the former chief minister was not capable of running government affairs but the current CM has also not yet provided tangible results. Bad governance, corruption and violation of merit are evidence of his incompetence,” she added.

However, the CM countered this by claiming his government worked without any discrimination and for the first time a huge development budget has been allocated for provincial development programmes.

Health, education, law and order, women development, local government and road infrastructure were among other sectors that saw a significant rise in the funds allocated for development schemes.

“During our tenure, we have only made appointments based on need while ensuring meritocracy. For the next year, we have created around 49,000 posts in various government sectors,” the chief minister said. “25,000 employees of the lady health worker programme will be incorporated in the services sector of Sindh and 10,000 personnel will be recruited in the police,” said Shah. “We have allocated a total Rs21 billion for education and Rs15 billion for health and consider both top priority sectors,” he remarked.

In the end, the chief minister announced three months’ basic salaries as honorarium for planning and development, finance and Sindh Assembly secretariat employees for their hard work in the budget process.

Later, the deputy speaker prorogued the session till an indefinite time.