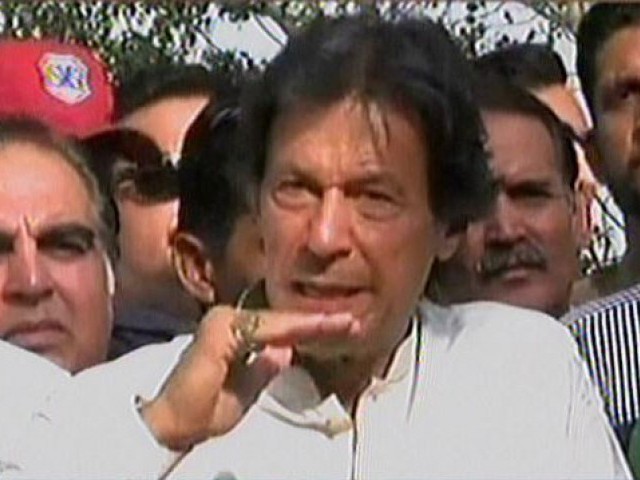 Chairman Pakistan Tehreek-e-Insaf (PTI) Imran Khan said on Friday the entire nation is standing behind the Joint Investigation Team (JIT) investigating the Panamagate case and will not let the rulers pressurise them.

“The team must not feel threatened or worried by the threats being hurled at them as they have the support of the masses,” Imran told reporters at his house in Bani Gala, Islamabad on Friday afternoon.

On Thursday, Prime Minister Nawaz Sharif, after his maiden appearance before the JIT, cautioned if the people’s mandate is not respected and conspirators continue to further their ‘specific agendas’, “then not only democracy but the country’s security will be at stake”.

According to the premier, he had been held accountable for every single penny, saying a milestone had been achieved that day as for the sake of law and supremacy of the Constitution his family and he presented themselves for accountability, once again.

Referring to the premier’s statement of a larger JIT in 2018 or general elections, Imran asked if being elected grants one the license to be involved in corruption. “This mandate is not given to you for corruption and money laundering,” he added.

“PML-N leaders, through their statements, are also hinting at not accepting the verdict,” Imran said. “We will make you accept the JIT’s decision; the masses will and your supporters, if taken to streets, will be numbered in front of a sea of people supporting the judiciary.”

“The Supreme Court, its chief justice, and the JIT enjoy complete support of the masses,” Imran added. “The nation is longing for justice against the thieves, which would happen for the first time in the country.”

The PTI chairman went on to add the PML-N had been trying to make the JIT controversial as they could not buy their loyalties. “The Sharifs are used to bribing people but were unable to bribe the investigating team.”

This nation is in debt because of the ongoing corruption and money laundering, he said, adding that the Qatari prince’s letter was a fraud. “The PM did not produce that letter for eight months and suddenly brought it out after his address at the Parliament.”