The panel is wastin­g too much time on media monito­ring, AGP tells SC
By Hasnaat Malik
Published: June 16, 2017
Tweet Email 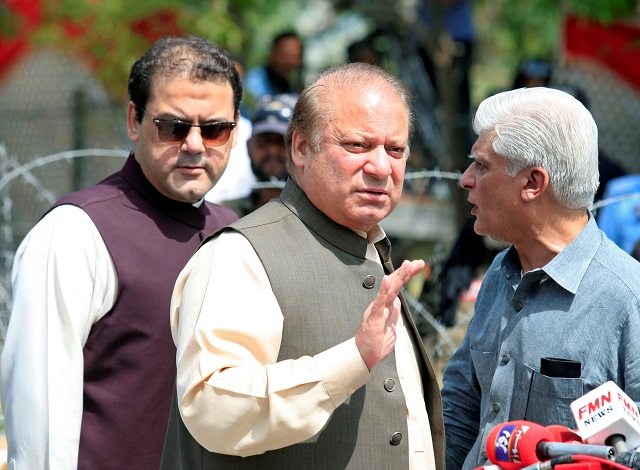 Prime Minister Nawaz Sharif gestures as he speaks to media after appearing before a Joint Investigation Team (JIT) in Islamabad on Thursday, June 15, 2017. PHOTO: REUTERS

ISLAMABAD: The Prime Minister House has accused the Joint Investigation Team (JIT) probing into the Panamagate case of tapping phones and monitoring witnesses, which is in violation of the law and the Constitution.

Attorney General for Pakistan (AGP) Ashtar Ausaf Ali raised serious doubts over JIT’s performance, accusing it of spending too much time and energy on ‘monitoring the media’.

In a four-page response which he has submitted in the Supreme Court, AGP Ashtar stated that the JIT application spanned more than 120 pages, containing news articles, screenshots of statements, tweets and messages gathered from social media.

“It appears that a lot of time and energy is being consumed in gathering this material. The JIT appears to have spent [too much] time watching talk shows, reading articles and monitoring tweets and messages on social media while arranging the same where necessary,” stated the reply.

The AGP also informed the apex court about the replies submitted by the Securities and Exchange Commission of Pakistan (SECP), National Accountability Bureau (NAB), Federal Board of Revenue (FBR), the Law Ministry, Intelligence Bureau and the Prime Minister’s Secretariat over JIT’s allegations of non-cooperation and tampering of records. “These institutions vehemently deny [all the] allegations [levelled by] the JIT.”

According to him, there could be no decision on the application filed by the JIT without serving notices on the parties concerned and recording their evidence.

He also stated that these grievances could be taken up after the JIT submitted its final report, which was scheduled to be handed over within a timeframe prescribed in the apex court’s order.

In its response, the IB denied allegations of hacking of Facebook accounts of JIT member Bilal Rasool or his family.

“Low-downs on member of the JIT was done under the standard operating procedures. Thus the allegations levelled against the IB were vehemently denied,” the IB maintained.

The PM House also denied allegations regarding alleged tutoring of witnesses and persons summoned by the JIT.

“They are put to strict proof of the allegations and if need be the named persons will be willing to file a rejoinder. The reliance and reference to ‘technical analysis’ is indeed an admission by the JIT of phone tapping and monitoring of witnesses, a violation of law and the constitution,” says the reply.

The PM House also denied leakage of summons. The summons issued by the JIT may have been leaked by the JIT or its staff, and in any way, such summons are a matter of public knowledge and do not in any manner hamper the investigation.

The SECP stated that the allegation of records tampering was incorrect, adding that the investigation in Chaudhry Sugar Mills had been closed in 2013 before the appointment of the incumbent chairman.

The NAB also denied that the show-cause notice served on one of the JIT members was with mala fide intention.

Irfan Naeem Mangi was served a show-cause notice pursuant to the Supreme Court’s order and 77 other persons prior to the formation of the JIT. They also pointed out that the matter was suspended.

The FBR also denied allegations levelled against it and stated that full record was provided within the shortest possible time.

The ministry of law and justice specifically denied all allegations against it and stated that the letter for mutual legal assistance under Section 21 was issued in just three days.

Commenting on Nihal Hashmi’s statement against the judiciary, the reply stated that the prime minister had taken immediate action so no mala fide was involved in the matter.

Hashmi has been stripped of his party membership and an FIR also filed against him.

The AGP assured the apex court that the implementation branch’s orders “shall be complied with the utmost dispatch and efforts would be made that a fair and impartial enquiry took place within the stipulated period”.

“In [view of] the facts and circumstances, appropriate orders be passed in the interest, equity and fair play,” the AGP requested the SC. 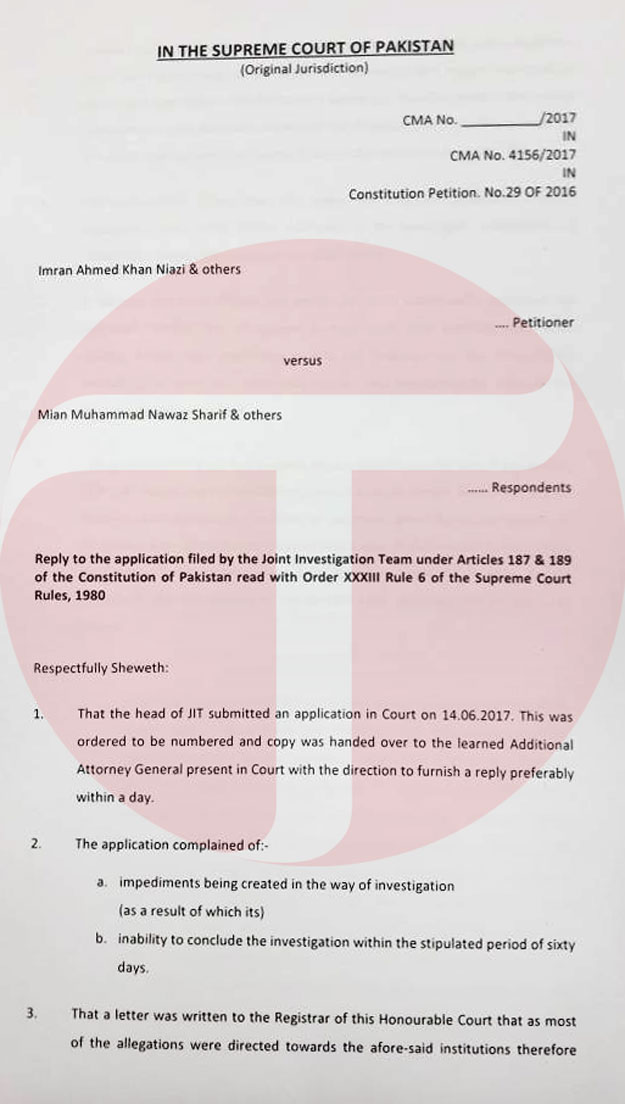 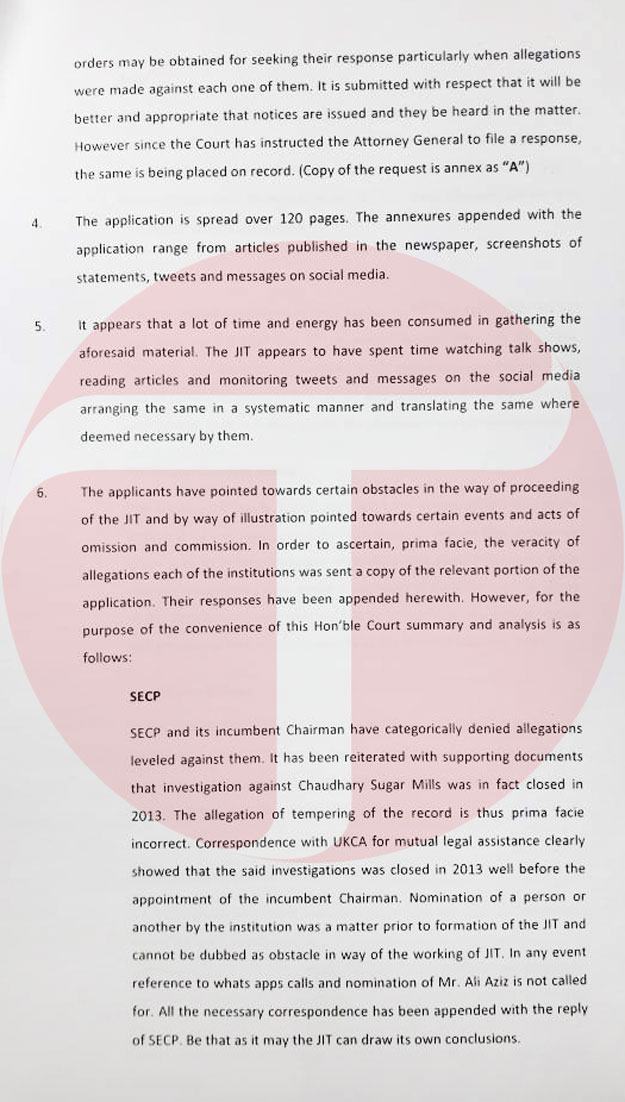 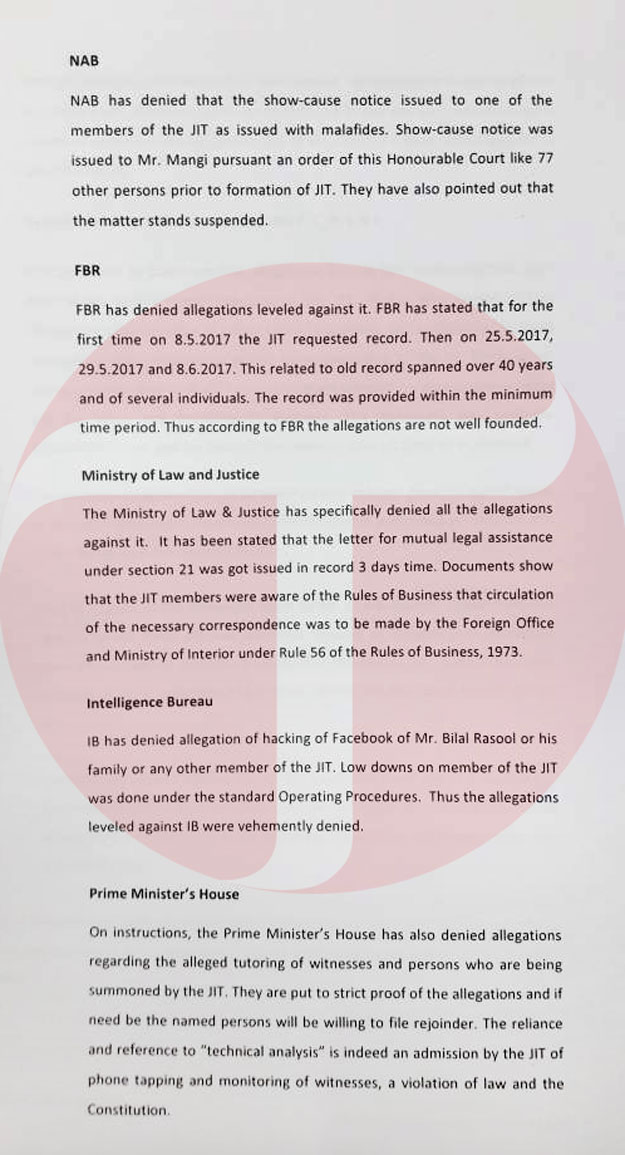 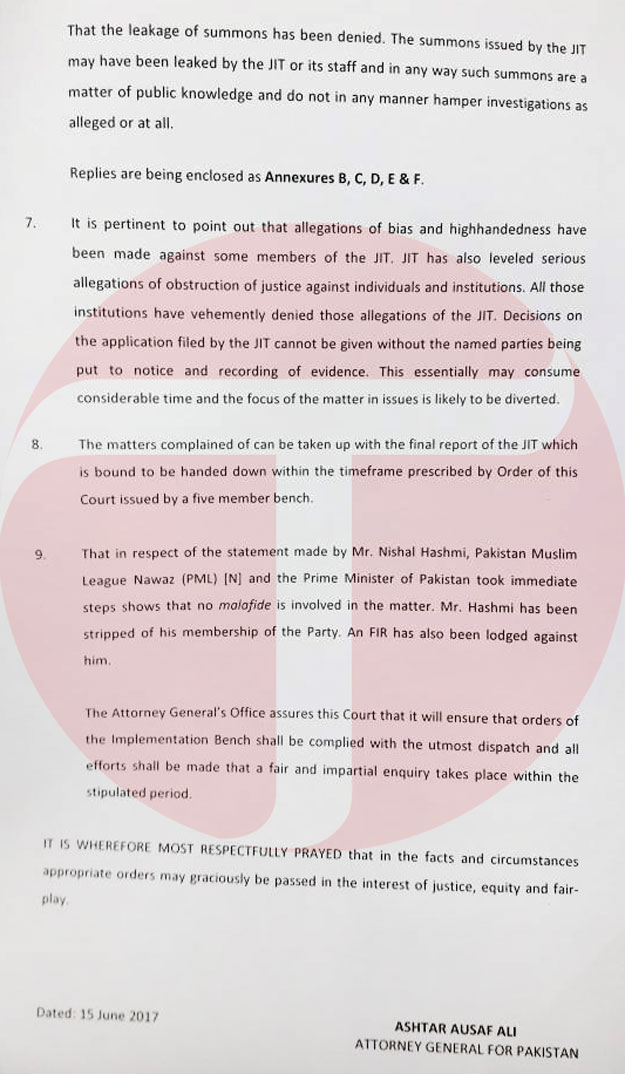 Pakistani brands who found success against their global competitors