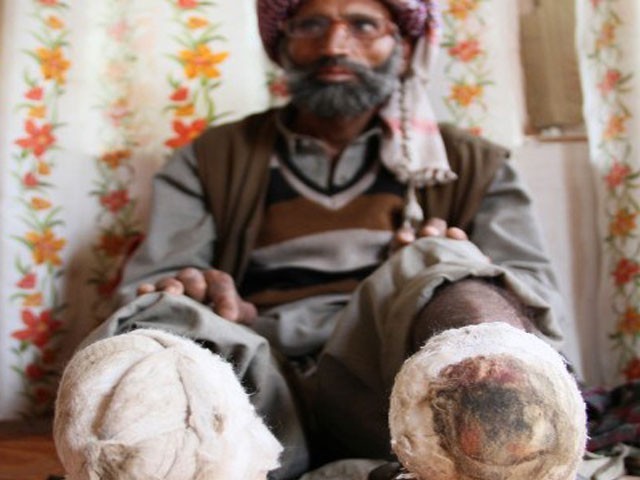 Khatana says Indian troops cut off his legs, sliced flesh from his waist with a blade and then forced him to eat bits of it. PHOTO COURTESY: WORLDWITHOUTTORTURE.ORG

A Kashmiri man whose legs were cut off by Indian security forces in disputed territory wants the UN to investigate the human rights violations in the region.

Qalandar Khatana became a member of a group called ‘Survivors for Truth and Justice’ last month, which comprises victims of sexual assault and Kashmiri families who’ve faced enforced disappearances and civilian killings in the valley.

The victims say they tried all means of peaceful protest in their struggle for justice but not even a single case was resolved and the denial of justice left them dispirited.

Khatana’s torment started in the 1990s after militancy erupted in occupied Kashmir. Living in one of the five villages near the Line of Control, speedy militarisation and conflict had an adverse impact on the life of residents of the region. 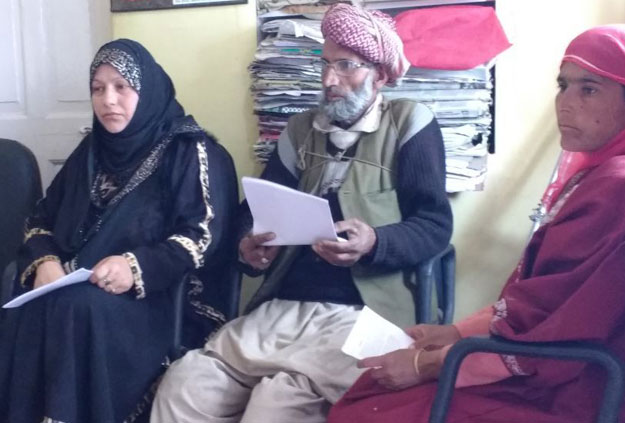 Khatana says Indian troops cut off his legs, sliced flesh from his waist with a blade and then forced him to eat bits of it. PHOTO COURTESY: FRENY MANECKSHA

One night in 1992, Khatana was dragged away by the Border Security Force personnel to the camp from his home at Mori. He was held and accused of being a guide who helped militants across the border.

“They kept interrogating me, beating me, even hanging me upside down,” he says.

Khatana recalls how he was then taken from one camp to another and tortured by the BSF and Special Task Force personnel.

He says they would take him atop a mountain and roll him down the slope. He was also held in solitary confinement besides forced to do hard labour.

Six months later, Khatana was sent to Srinagar’s Papa II, an interrogation and torture centre. The flesh from his waist and elsewhere, Khatana said, was sliced with a blade and he was even then forced to eat bits of it.

One day, the Indian security forces hacked off his legs. “I passed out and when I regained consciousness, I found my blood-stained limbs had been tied with strips of cloth. I learnt fellow inmates at the torture centre had torn off the sleeves of their shirts and had tried to stop the bleeding.”

At IoK’s Kot Balwal jail, his wounds had gotten infected with maggots and eventually his legs had to be amputated. Khatana was later released and received treatment at the Bone and Joints Hospital in Barzulla in 1996.

He returned home too frightened to approach the police or file any complaint and completely devastated.

“I was terrified. It was almost as if it had been drummed into me that I had no rights to life. I wasn’t sure if I would be allowed to live even after my release.”

Khatana’s worries were intensified when he learnt his wife was also tortured. She was kicked violently in the chest that left her with broken ribs. Khatana’s wife remained confined to her bed until her death a few years later, leaving him with two girls and a boy.

This article originally appeared on The Wire