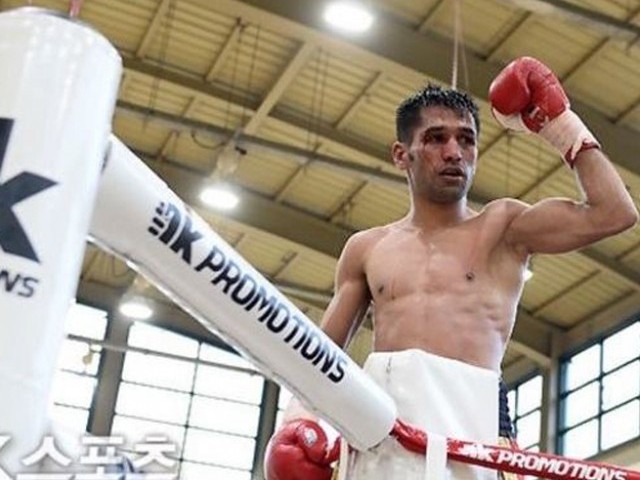 KARACHI: “It is incredible, it really is,” said Pakistan’s only professional boxer Muhammad Waseem as he celebrates topping the World Boxing Council’s rankings for June.

The WBC silver flyweight champion feels that the top rating is just a timely reminder for him that he is aiming to become the world champion in his weight category.

The 29-year-old is now the first Pakistani to hold a top ranking at the professional WBC level.

Nightmare start for boxers in Tashkent

“I’m very happy with the ratings, but my aim is to win the world title,” Waseem told The Express Tribune. “I’ve had to wait a long time to get here — to get this top rating and to be in a position to fight again as I haven’t done so since November because of a lack of funds and sponsorship. I’m just focusing on winning. It is the title that I want and it is the fight that will take place in September or October. So this is just a build-up for that.”

Waseem won the WBC Silver title against Philippines’ Jether Oliva in July last year and then successfully defended it in November against another Filipino, Geimel Magramo.

He is undefeated in five professional bouts, winning via knockout in three of them.

The Quetta-based boxer said he will be leaving for Panama on June 29 while he will had a bout with a local boxer on July 5 and then another one on July 29. He knows of how high the stakes are now, since he needs to maintain top rating besides preparing for his WBC flyweight title bout.

“Central American countries have good boxing culture; in Panama there are very competitive boxers and I feel these two fights will give me that boost and help me get back in form,” he said. “They are very important fights since I cannot afford to lose.”

Waseem revealed he has been training in his home town with his local coach for the last month and believes it is essential for him to get into good form before going to Panama.

“This seven-month gap since my last fight has been tricky, I haven’t trained at all,” he added. “As soon as we got money from the government, my manager Andy Kim roped in people for my next few bouts. I train daily for a few hours with coach Muhammad Tariq. There will be a training camp in Panama too, so it will be better for me to leave early.”

Waseem hopes that with his new WBC ratings secured, local sports channels will broadcast his fights.

“I would want the channels to show my bouts to my people,” he said. “I hope the WBC rating and the fact that I am going for the world title this year would change the attitude of sports channels in Pakistan. Showing my bout will help me know that I have the support of all those watching back home.”

Waseem added that his bigger aim is to eventually move to the super flyweight category once he gets the WBC flyweight title.

“It is like conquering this category first and then moving to the next,” said Waseem. “My natural weight is more than what we have in the flyweight category. I have to put in a lot of effort before each fight to maintain this weight.”