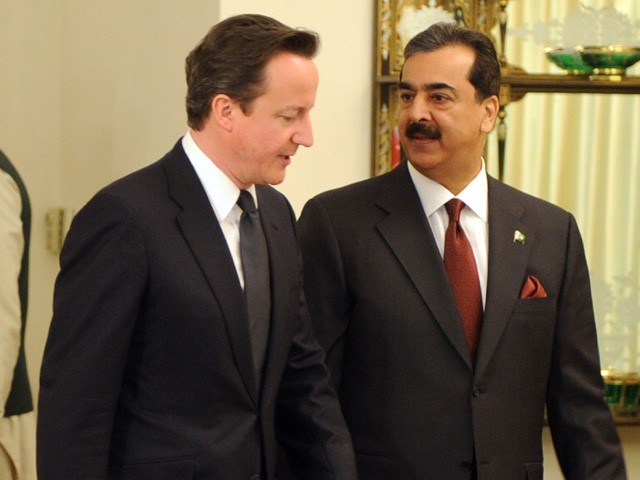 British Prime Minister David Cameron and his Pakistani counterpart Yousuf Raza Gilani chat prior to their meeting at the Prime Minister's House in Islamabad on April 5, 2011. PHOTO: AFP

British Prime Minister David Cameron on Tuesday said that Britain’s friendship with Pakistan was unbreakable and it has been further enhanced by the strategic dialogue that has just been signed.

He said that it is widely believed that “Pakistan needs trade more than aid” adding that increasing trade was a high priority of the dialogue.

Cameron pledged to encourage British business to increase investment in Pakistan and said that the two countries have agreed to double bilateral trade in goods and services to 2.5 billion pounds per year by 2015.

He said that there were “real opportunities” for British firm in Pakistan, adding that he would continue to push for more access in the European market for Pakistan.

With regards to security, the British prime minister said “terrorism threatens both countries,” adding that there was no higher shared priority between the countries, than tackling terrorism.

He said that both nations had agreed to an increase in cooperation between intelligence agencies, adding that way ahead for Afghanistan was also discussed in the meeting.

Talking on the third issue, education, Cameron said that progress in this area has “the potential to transform Pakistan.”

Part of Cameron’s olive branch is a one billion dollar pledge to help build schools, train teachers and buy textbooks for Pakistani children – potentially Britain’s biggest overseas education project which could put Pakistan at the top of the UK’s aid list.

The four-year scheme, which will have to be matched by Pakistan to reach fruition, is intended to put four million children into school and is seen by Britain as a way to reduce extremism.

He said that Britain was committed to new program of assistance through which they intend to put four million children in schools, train 90,000 teachers and provide six million text books, by 2015.

He termed 2011 as the year of education for Pakistan and urged his counterpart to make education his priority.

Cameron urged Pakistan and India to look beyond cricket diplomacy and embrace their common interests.

He described the sight of the Indian and Pakistani premiers sitting next to each other to watch the cricket world cup semi-final last week in Mohali as a “tremendous sign of hope for the future”.

“I believe the time is ripe for your countries to look even further beyond what divides you and embrace what unites you,” Cameron said in a speech to university students.

“Two democracies, with young, ambitious populations and all the potential in the world, and you live side by side. The opportunities for mutual progress are simply enormous. The opportunity to trade and grow.”

He pointed out that currently, Pakistan represents just one percent of all India’s trade, and India just five percent of Pakistan’s.

“Experts say that the potential is there to expand this by as much as 50 times. Just think what that would mean for jobs, investment and living standards,” the British prime minister said.

“And then there’s the thing you can never put a price on, a stronger relationship between your countries addressing all the security concerns on both sides would mean peace and security for your people.”

He also pledged to push the World Trade Organisation to agree on an emergency trade package for Pakistan, proposed last year by the European Union.

“Back in Europe, we will continue to be the strongest possible advocate for greater Pakistani access to European Union markets, and press our World Trade Organisation partners to reach agreement on the emergency package of trade measures proposed last year by the EU,” he said.

Prime Minister Gilani termed the strategic dialogue between Pakistan and Britain as a step towards strengthening relations.

Gilani said that Pakistan was committed to further strengthen relations in all areas of life adding that he had briefed Cameron of his visit to India.

He added that the two premiers also discussed achieving peace and stability in Afghanistan adding that Pakistan will fully support all Afghan led all efforts.

Earlier, on his arrival, Cameron was welcomed with a guard of honour at the Prime Minister House.

He also met with various government officials present at the occasion including top military leadership and members of the cabinet.

During his visit, Cameron will meet President Asif Ali Zardari, Prime Minister Yousaf Raza Gilani, and other leaders as the two sides seek to finalise modalities of their proposed “strategic dialogue” along the lines of the Pakistan-US strategic dialogue.

According to sources in the Foreign Office (FO), the talks will focus on terrorism and the Afghan situation. Sources said that the Pakistani side is likely to ask the UK to use its influence over India to resolve issues including that of Kashmir. Cameron, during a visit to India, had made a statement against Pakistan saying it was straining the two neighbours’ relationship.

Among other interests, Pakistan is also likely to make efforts to secure greater access to European markets through the UK which is a major member of the European Union.

The two countries have also been mulling to cooperate to resolve issues related to the Pakistani community in Britain, numbered at over a million people. One of the issues includes increasing radicalism amongst young Pakistani-origin residents.