'Hard Brexit' must be abandoned after election: Scottish leader

'Hard Brexit' must be abandoned after election: Scottish leader 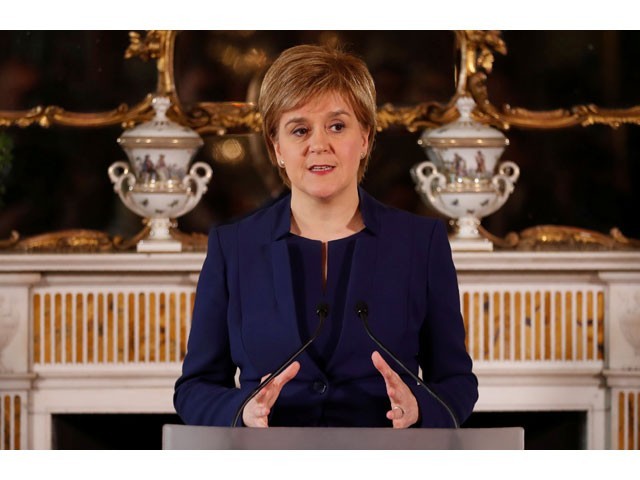 Scotland's First Minister, and leader of the Scottish National Party (SNP) Nicola Sturgeon, speaks during a press conference at Bute House in Edinburgh on June 9, 2017, following the results of the snap general election. PHOTO: AFP

EDINBURGH: Scottish First Minister Nicola Sturgeon said on Friday that Britain must stay in the European single market as it leaves the EU, following the election which saw Prime Minister Theresa May lose her majority.

“The reckless Tory pursuit of a ‘hard Brexit’ must now be abandoned,” the Scottish National Party leader told a press conference.

“The Conservatives have lost their majority and the prime minister has lost all authority and credibility.”

Sturgeon said she was appealing for MPs from all parties to work together to keep Britain in the European single market.

The SNP is the third biggest group in the 650-seat House of Commons in London following Thursday’s election.

But although the left-wing, secessionist party finished top in Scotland, winning 35 of its 59 seats, it was 21 down on the number it won in 2015, losing constituencies to the Conservatives, Labour and the Liberal Democrats.

Sturgeon said that while the SNP finished first in Scotland, “it is an inescapable fact that we also suffered some bitterly disappointing losses”.

The SNP was vehemently demanding a second referendum on Scotland seceding from the United Kingdom in late 2018 or early 2019, once the full final terms of Brexit start to become clear.

But Sturgeon hinted that the surge in support for unionist parties might force a rethink.

“We will reflect on these results, we will listen to voters and we will consider very carefully the best way forward for Scotland.”

Sturgeon suggested that she was ready to work with Labour, the second-biggest party in parliament, and others, to keep the Conservatives from five more years in power.

“We will work with others if it is at all possible to keep the Tories out of government.

“We stand ready to play our part in that alliance. And it is needed now more than ever.

“We will now work with others to do everything we can… to bring an end to the austerity.

“There must now be an attempt to find consensus.”