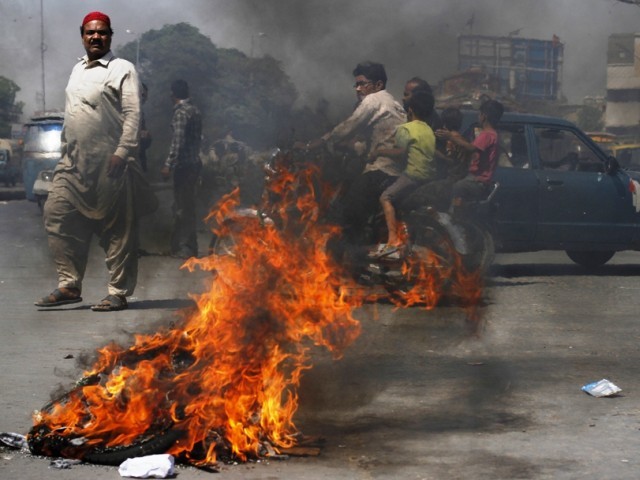 Residents pass by burning tires set alight by protesters during a traders' strike in Karachi April 5, 2011. Traders in Karachi were on strike on Tuesday, rallying against the extortion mafia in the city, local media reported. PHOTO: REUTERS/FILE

KARACHI: The Muttahida Qaumi Movement on Tuesday set a two-day deadline for the government to take action against the extortionist mafia in Karachi.

The MQM had staged a walkout during the senate session, demanding that the government take action against the rising cases of extortion.

Interior Minister Rehman Malik informed the senate that 30 extortionists had been arrested in the city and said that the government was committed to taking action against them.

The MQM also withdrew its de-weaponisation bill on the advice of Law Minister Babar Awan.

Earlier, two major trade bodies of Karachi have clashed with each other during a protest against extortion mafia in the city.

The Karachi Chamber of Commerce and Industry (KCCI) had given a strike call today to protest against the poor law and order situation.

All markets run by the office-bearers of the Karachi Traders Alliance remained closed.

However, KCCI leader Siraj Qasim told media sources that the protest was peaceful and the strike is not a solution to the problem.

This enraged the members of the Traders Alliance, whose leader Ateeq Mir accused the KCCI of sabotaging their strike.

The office-bearers from both the trade bodies clashed which resulted in several protesters suffering injuries.

Muttahida Qaumi Movement (MQM) and Awami National Party (ANP) congratulated the trader unions for their peaceful strike against extortion and abduction of traders along with murders and other criminal activities prevalent in Karachi.

MQM co-ordination committee said in a statement that citizens of Karachi appreciate all the traders and shop keepers for their peaceful protests.

MQM Co-ordination committee has assured the traders community that they would aid them through their protests along with the ANP who has also extended its support.

ANP leadership appreciated the support of the people and claimed that it has helped the traders strike to become a success. They also recommended that conflicts among the traders community must be resolved.

Traders and shopkeepers have announced a strike from Tuesday (today) to protest against the extortion mafia.

Despite the traders’ strike, schools will be open. The strike has mainly been called by the Karachi Traders Alliance, and has been backed by the Awami National Party and the Muttahida Qaumi Movement.

KTA president Atiq Mir said on Monday that the strike will be peaceful and markets and business will remain closed.