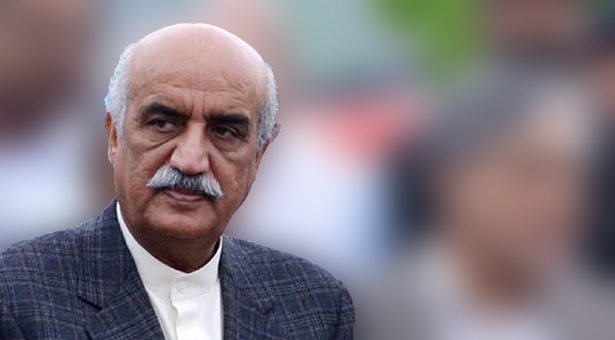 ISLAMABAD: Leader of the Opposition in the National Assembly Syed Khurshid Shah on Wednesday alleged that efforts were afoot to make state institutions controversial, saying such attempts would further the anarchy-like situation in the country.

He was speaking against the backdrop of a recent statement of Punjab Chief Minister Shehbaz Sharif about the ongoing investigations by the JIT into the Panamagate case.

Following a brief speech of the opposition leader, the joint opposition boycotted the rest of the proceedings of the 10th sitting of the 43rd session of the house that has been debating the Financial Bill for FY2017-18.

However, Wednesday’s boycott of the budget session that started when the government refused to air the opposition leader’s speech live was also prompted by a statement of the Punjab chief minister in which he took exception to the working of the JIT.

The Punjab chief minister, while criticising the JIT, had said: “PM’s son is being interrogated as if he is a looter”. Sharif had called for across-the-board accountability, saying “targeting one family is no accountability”.

Speaking on the floor of the house, the opposition leader said: “The Punjab CM should withdraw his words about the judiciary and JIT and tender an apology for his controversial statement.”

He said protection of the institutions was vital for the survival of the country and “if we harm the judiciary, then the law of ‘might is right’ will prevail in the country”.

Shah said the Pakistan Peoples Party never issued anti-state statements even when Zulfikar Ali Bhutto was sentenced to death by the court.

Later, Shah announced boycott of the rest of the proceedings. That drew strong reaction from federal ministers, who criticised the attitude of opposition lawmakers.

Railways Minister Khawaja Saad Rafique, speaking on the floor of the house, said “The PML-N respects all state institutions and has all respect for the judges.”

He said the PML-N leadership and its members had always presented themselves for accountability and would continue to do so in the future with the same spirit.

Minister of State for Water and Power Abid Sher Ali said the PPPP had failed to deliver in Sindh and it should focus on the province rather than levelling baseless allegations against the federal government.

He said the PPPP made historic corruption in the Neelum-Jhelum Hydropower and Nandipur Power projects. He said that Musharraf promulgated the National Reconciliation Ordinance (NRO) to protect corruption of the PPP.

Minister for Kashmir Affairs and Gilgit-Baltistan Barjees Tahir said the government was ready to take opposition on board, but regretted that the attitude of the opposition members was not serious.

He said opposition members should highlight the problems of their constituencies in the house but they had badly failed to perform their due role during the ongoing budget discussion.

Minister of State for Interior Balighur Rehman said the opposition leader was responsible for not allowing members to speak in the budget session. He said the PPP and the PTI should compare performance of their governments in Sindh and Khyber-Pakhtunkhwa with Punjab.

Four minority lawmakers also staged a token walkout from the house against the discriminatory advertisement for sanitary workers job and death of a sanitary worker in Sindh due to the negligence of a doctor.

Speaking on a point of order, Asiya Nasir said no proper action had been taken yet against the doctor who refused to treat a Christian sanitary worker in Umerkot district.

Responding it, Nawab Yousaf Talpur of the PPP said the Sindh government had taken action against the doctor. He said strict action would be taken against all those who were involved in the incident.

Some eight lawmakers on Wednesday took part in the general discussion about the budget for FY2017-18.