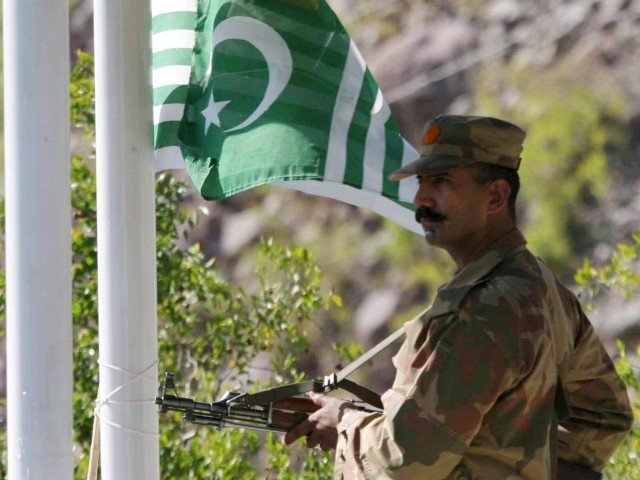 File photo of a Pakistani soldier along the Line of Control. PHOTO: ISPR

ISLAMABAD: The upper house of parliament has sought details of casualties suffered by the military during frequent cross-border exchanges with India along the Line of Control (LoC).

Minister of State for Power Abid Sher Ali, in response to a calling attention notice, gave a brief statement in the Senate on Tuesday about the situation along the LoC.

Speaking on behalf of Defence Minister Khawaja Asif, Ali provided civilian casualties only, saying: “Pakistan Army wants to withhold the information about the losses suffered by its troops due to security reasons’.”

“We have written to the GHQ for the details of our soldiers who have lost their lives serving along the LoC. However, the military authorities refused to share the details citing security concerns,” the state minister said.

This prompted a strong reaction from Senate Chairman Raza Rabbani.

The state minister said since the recent escalation of tensions between the two nuclear armed neighbours, at least 66 civilians have died while another 288 have been injured in Indian troops’ fire across Pakistani side of the Line of Control (LoC).

The military’s reluctance to share information led to a strong reaction from the Senate chairman. “Nothing can be withheld from parliament. I am not ready to accept this. Declare us irresponsible people, then [it will be] fair enough,” Rabbani said.

He asked his secretariat to keep the adjournment pending for yet another day and directed the government to either provide the details in an in-camera session of the Senate or submit them in his chamber.

In case the government opts to submit the details in his chamber, every senator would be allowed to see the written information.

The opposition also criticised the foreign policy of successive regimes towards Afghanistan since the Soviet invasion.

Senators Mushahid Hussain Syed, Hafiz Humdullah, Tahir Mashahdi, Taj Haider and Rehman Mailk took part in the discussion started through an adjournment motion. The motion was filed on May 31 to discuss the incident of firing by Afghan security forces on a census team operating inside the residential areas of Pakistan at the Chaman border point.

Adviser to PM on Foreign Affairs Sartaj Aziz is likely to attend the house tomorrow to give a policy statement on the matter.