Trump replac­es top career diplom­at at the US embass­y of China due to confli­cting views
By AFP
Published: June 6, 2017
Tweet Email 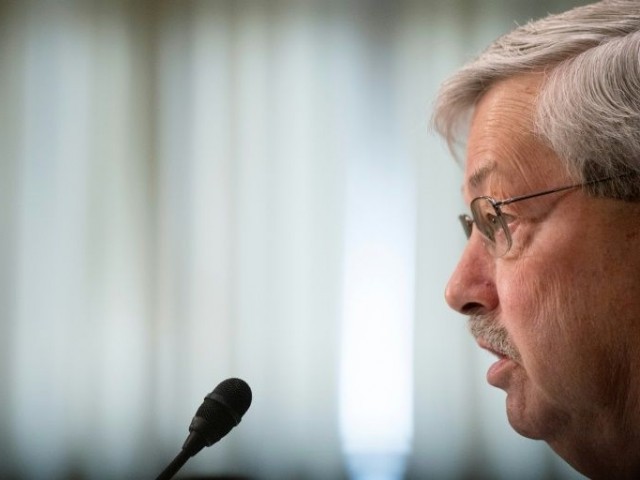 Donald Trump's choice as the new ambassador to China, former Iowa governor Terry Branstad, pictured, has yet to arrive in the country. PHOTO: AFP

BEIJING: The top career diplomat at the US embassy in China has stepped down, an American official in Beijing confirmed on Tuesday, amid suggestions that he opposes President Donald Trump’s climate policy.

Climate: What is the Paris Agreement?

Polley said the embassy informed China’s foreign affairs ministry on Monday that Jonathan Fritz would be serving as charge d’affaires. She declined to comment on when a permanent replacement for Rank would be announced.

Trump’s choice as the new ambassador to China, former Iowa governor Terry Branstad, has yet to arrive in the country.
News of Rank’s resignation was broken on Twitter by veteran China reporter John Pomfret, an editor at the SupChina news site, formerly of the Washington Post.

Trump says US will withdraw from Paris climate accord

According to Pomfret, Rank stepped down because he “could not back Trump on climate” and had been dismayed by the president’s decision to pull out of the Paris climate accord.

Pomfret added Rank had “called a town hall meeting” at the embassy “to say he could not deliver a demarche [initiative]” to China over US withdrawal from the Paris agreement.