You may not know the answer to this questi­on but what hundre­ds of studen­ts across Karach­i are sure about is that if...
By Samia Saleem
Published: May 19, 2010
Tweet Email 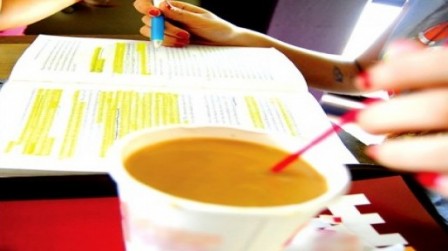 A law student prepares for her exam at a coffee shop. Students can prepare for their GRE by taking tests online.

KARACHI: You may not know the answer to this question but what hundreds of students across Karachi are sure about is that if they don’t do well in the university admissions tests their entire future will be at stake.

January to May is traditionally high season for the Graduate Record Exam (GRE) and Graduate Management Admission Test (GMAT) – admissions tests for postgraduate degrees at universities outside Pakistan. While the examination centres are not allowed to give information on the number of students appearing each year, according to some estimates there are over a thousand from Karachi alone.

Anees Hussain, a coaching centre that prepares students for the GRE and the GMAT enrol almost 300 to 500 students every year in their four branches across the city. The Princeton Review, a global test-prep firm from the US, also receives at least 300 students every year for the GRE and GMAT preparations. “This number varies however and in the good years we get almost 400 students,” said Saad Alavi, the CEO of The Princeton Review Pakistan.

Other preparation centres are dotted across Karachi and a large number of students prepare on their own. The number of students appearing for the GRE is high during January and May because of the US Fulbright Scholarship deadline. “I sat the test twice to get a good score for my Fulbright application,” said Ahmad Murtaza, who scored 1,170 in the first attempt and 1,220 in the second out of a total 1,600, excluding the score for the essay section.

The GRE costs $190 that converts to almost Rs16,500 making it difficult for many students to retake the exam if they are unlucky in the first attempt. “Even after getting the Fulbright scholarship I had to take the exam again to get into a good university in the US,” said Rizwan Baig, “I felt it was an added burden given the fact that I was applying on a scholarship only because I could not afford to spend so much on my education.” Even those students who are applying on self finance feel that the GRE is expensive. “I have given my GMAT but I am not satisfied with my scores because I might not be able to get admission at a good university,” said Maaz Rizvi, who plans to apply for an MBA degree this year. “I am a bit reluctant to sit it again because the fee is very high,” he added.

Another student complained that coaching centres also charge exorbitant amounts for tuitions. “Coaching centres that give preparatory classes are charging Rs20,000 on average and that comes around to sitting twice for the actual test,” said Farhan. What most students are unaware of is that they can take a mock exam at the Prometric centre at an affordable rate of Rs200 and find out their preparation status, informed an officer at the United States Education Foundation of Pakistan centre in Karachi.

The mock is an exact replica of the original test and can be taken anytime during office hours at the Karachi test centre, he said, adding that while IELTS, another entrance exam, has a validity period of two years only, GRE and GMAT scores are valid for five years, meaning that it is a worthwhile investment for prospective students.