This latest model boasts a powerf­ul engine that has been develo­ped in India over many years
By AFP
Published: June 5, 2017
Tweet Email 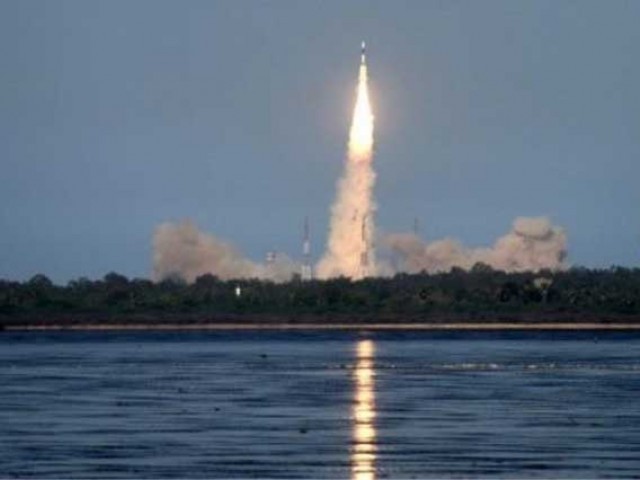 India is set to launch its most powerful rocket to date in another milestone for its space programme that one day hopes to send manned missions. PHOTO: AFP

NEW DELHI: India’s most powerful homegrown rocket to date is set to launch Monday, another milestone for its indigenous space programme that one day hopes to put a man into orbit.

The 43-metre (140-foot) rocket is scheduled to lift off just before 5:30 pm (1200 GMT) from the southern island of Sriharikota, one of two sites used by the Indian Space Research Organisation (ISRO) to launch satellites.

This latest model boasts a powerful engine that has been developed in India over many years. Programme managers hope the technology will reduce reliance on European engines that have propelled some of India’s spacecraft in the past.

The GSLV Mk III rocket will carry a satellite weighing more than three tonnes into a high orbit above Earth, a landmark achievement as India had struggled to match the heavier payloads of other space giants.

“This is an important moment in India’s space technology to launch an indigenous heavy rocket,” Ajay Lele from the Delhi-based Institute for Defence Studies and Analyses told AFP.

“Communication satellites are quite heavy and we were able to send up to two tonnes previously. This is a double quantum jump for India.”

A successful launch of the 640-tonne rocket will be another feather in the cap for scientists at ISRO, who won Asia’s race to Mars in 2014 when an Indian spacecraft reached the Red Planet on a shoe-string budget.

ISRO is also mulling the idea of missions to Jupiter and Venus.
India is vying for a vying for a larger slice of the booming commercial satellite business as phone, internet and other companies seek greater and more high-end communications.

In February, India put a record 104 satellites in orbit from a single rocket, surpassing Russia which launched 39 satellites in one mission in June 2014.

The rocket’s main cargo was a 714-kilogram (1,574-pound) satellite for Earth observation but it was also loaded with 103 smaller “nano satellites”, nearly all from other countries.

Although India has successfully launched lighter satellites in recent years, this latest rocket is capable of carrying a massive four-tonne payload into high orbit — twice the capacity of its predecessor, ISRO says.

The space agency tested a less-developed version of the rocket in December 2014 while the cryogenic engine was still in the testing phase.

It carried an unmanned crew capsule which separated from the rocket and splashed down in the Bay of Bengal off India’s east coast 20 minutes after liftoff.

The Indian-made capsule was designed to carry up to three astronauts but ISRO said the project would take at least another seven years to reach the point where a crew could be put into space.
India wants to become the fourth nation — after Russia, the United States and China — to put astronauts into orbit but its manned spaceflight programme has seen multiple stops and starts.