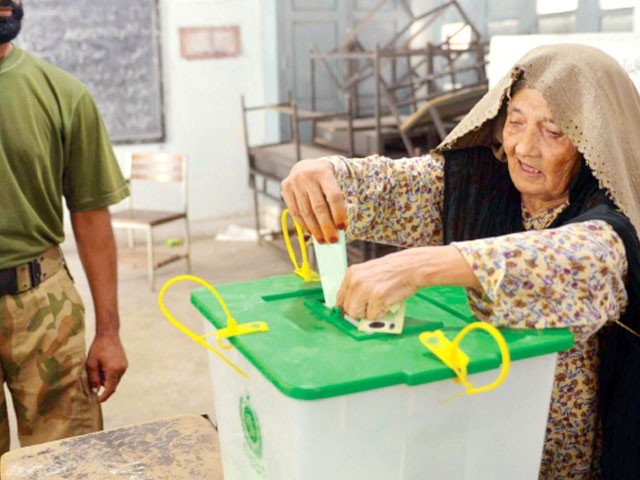 As the 2018 general elections draw closer, all our attention should be on how to make citizens aware of their right — and need — to vote. If democracy has started its wheels in Pakistan, those eligible to vote should be identified and equipped to exercise their constitutional right.

According to the Election Commission of Pakistan (ECP), however, there are 12 million women who are not registered voters in Pakistan. Out of a population of approximately 190 million, 12 million women in our country do not hold any computerised national identity cards (CNIC) issued by the National Database and Registration Authority(NADRA), a prerequisite to register oneself as a voter. The choice of whether to vote or not is not an option for them. This significantly alarming statistic will impact our democracy in many ways but politically dehumanising 12 million voters will impact us beyond just the exercise of voting and the elections.

Looking past the elections for a minute, holding a CNIC card itself has various implications. A CNIC number in this country is often a basic requirement for many individual transactions, allowing one’s self to confirm their identity with ease but is essential for any interaction with the state. It is the first recognition of a person’s active citizenry.

These 12 million women, it is safe to assume, then have not been engaged in any formal employment, do not hold a bank account, have not carried out any formal transaction often required to own property nor more worryingly, have they attended a government educational institution after 18 years of age. These 12 million women, therefore, exist without truly existing, not involved as active citizens. Uncounted by and unknown to the state machinery in the true sense of the word.

According to statistics — though we do not need statistics to show us on what basis Pakistan is divided, an intelligent guess would be more than accurate — the majority of Pakistani women that do not hold ID cards are from rural Pakistan and belong to economically poor families. This creates another reason for the divide between rural and urban to widen and remain so. Another persistent trend is the divide in voter registration statistics between genders. In 2015, the Fair And Free Election Network reported the difference in the female and male voter registration gap at 11.65 million. This wide gap between registered female and male voters continues even when analysing the four provinces individually. Worryingly, the gap increases every year.

The real irony, however, is that these 12 million women are so far removed from the state’s radar in terms of its responsibilities to them that a CNIC is not at all essential to these women. Their day-to-day lives do not require any formal interaction with the state nor do they expect anything from the state machinery. Hence these women do not think it necessary to go through what they consider rigid procedural requirements, such as birth and marriage certificates, which they do not possess, the administrative costs involved and the physical access to NADRA offices. The result of this process would be documentation that realistically these women do not believe will benefit them in any way.

Poorly educated women, unaware or their rights and the state’s responsibility towards them is bad enough. What is worse is the compliancy with which the state, its machinery and political parties have taken advantage of the patriarchal structure to maintain the status quo. Constitutionally, the state has breached 12 million citizens’ basic fundamental rights and all political parties have actively ensured the transgression. To mend this going forward even perfect democratic institutions should seek a state of emergency, so alarming is the disproportionate figure of 12 million politically excluded and disenfranchised citizens.

Going into the 2018 elections would result in the third uninterrupted election this young democracy desperately needs. But the meaning of democracy, like religion, has been lost to ritualistic practices. We must be careful going forward that democracy does not stand still in Pakistan, as mere ticking of the boxes. Periodic elections — tick. Ballot boxes and political representatives — tick. Parliament with a ruling party and opposition — tick. We must strive towards a Pakistani democracy that reflects inclusion, accountability and truly representative structures. If we ensure anything in these elections, it should be that the 12 million women who do not hold CNICs should do so. It is essential we take these women along in the process of building our democracy.

The ECP and NADRA are attempting to strategies to narrow the female/male voter registration gap. But such a grave problem with such little time left requires much more collaboration and actual innovative thinking. To identify these 12 million women, the government must openly accept the help of specialist non-governmental organisations, to tap into their unique knowledge bank. Once these women have been identified, NADRA should firstly, forego the administrative fees and the rigid documentary evidence required for CNIC registration. More mobile units should reach out to the women that are unable to access NADRA facilities. The national and provincial commissions on the status of women must act as oversight bodies ensuring that mobile units are reaching out where they are actually needed.

In Balochistan, in the absence of such a commission the Women’s Development Department should play the role of being an oversight body. Alternatively, for the purposes of these elections a separate and free voters only identification card could be introduced, where the requirement of registration is left to a minimum. It is not possible to emphasise enough that this responsibility lays solely with the state. But political parties ambitious to hold power all the while taking advantage of the state’s inability to recognise its responsibility, is equal to collusion — perhaps even treacherous. The new amendments to existing law to ensure that election results are declared null and void in constituencies where women have been barred from voting is a welcome and much needed development.

But first things first. Registration of women voters. It is only once these women are registered, can we actually organise, mobilise, educate and ensure their participation in the upcoming elections. For too long, family patriarchs, political party deals to conclude against women voters and the lack of political will and foresight has created the perfect environment to silence women voters. The invisible electorate in Pakistan are its women and the status quo that shuns them out should be challenged and discarded with the state taking the lead.

When numbers are used as an economic shield