The boycot­t has largel­y drawn suppor­t on social media but many object to making poor vendor­s suffer­
By Our Correspondent
Published: June 2, 2017
Tweet Email 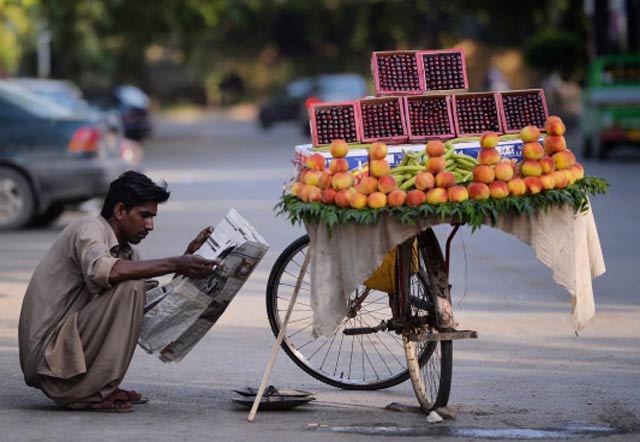 The citizens of Karachi are boycotting fruit for three days to protest against the price hike in Ramazan. PHOTO: AFP

KARACHI: As Karachi’s residents observe a three-day strike against fruit vendors for overcharging during Ramazan, the effect of the campaign, which began on social media, was quite evident on its first day on Friday.

The Old Sabzi Mandi on University Road is usually a crowded market and sees a lot of clogged traffic because of parked cars left behind by customers visiting to buy fresh fruit and vegetables after work, but on Friday afternoon, the market was largely empty.

“I’ve only had a few customers since morning,” Abdullah Jan, a fruit vendor told The Express Tribune. “All I have been doing today is keeping flies off my fruits with my handkerchief.”

Jan was unaware that there was consumer strike because he said he had not had the opportunity to watch TV for the last few days.

Will a fruit boycott bear fruit?

As he spent time swatting the flies away, the only customers who did approach Jan’s stall were those returning from a nearby mosque after Friday prayer.

Tariq Mirza was among them. He conceded that prices were lower, saying earlier a dozen bananas were being sold for Rs160 but on Friday they cost Rs100.

Mirza said he believed such strikes could help but maintained that it was the government’s responsibility to ensure that vendors sold fruit in compliance with the price list.

Zafar Hussain, who is observing the strike, said he was only at the market to buy mangoes for his grandson and nothing else.

“Sadly, there will be no fruit chaat in my house for three days,” he added with a laugh.

Fruit vendor Gul Muhammad explained that vendors were only selling at increased prices because they were being charged higher at the wholesale level.

“Everything is overpriced in this country. The public should protest against everything then,” he said.

The situation was similar in various markets throughout the city – only a few people, who may be unaware of the strike, were seen purchasing fruit from vendors.

The boycott has however met with mixed reactions from the public. Some ardently support it.

I agree with #FruitStrike but 3 days are not enough. It should be long for prolong results. At least 7 days.

Donot underestimate the power of a common man dear Fruit Chaat ….
Will meet you on Monday.#FruitBoycott

#FruitBoycott we all should support karachi fruit boycott decision and spread this message all over pakistan so no one buy fruit on 2.3 and4

Others, including prominent personalities, feel it targets poor sellers instead of wholesalers and retailers who are the real culprits behind excessive prices.

#FruitBoycott of this guy who has some Offshore companies, a billionaire ex wife, some aqatri friends and a defence society. pic.twitter.com/xo15e8C6xh

#FruitBoycott
This is disgusting. The poor vendors don't determine the prices. Traders do!
Its responsibility of Govt to go against them.

Are people seriously boycotting fruit wallas in #pakistan? Have we all gone crazy? These men barely make money to make ends meet! #Ramzan

I will buy fruit from the vendor and pay him a little extra today. Don't punish the poor. #Boycott is a petty bourgeoise shenanigan.

Guitarist Aamir Zaki passes away at 49