Says some elemen­ts malign­ing Pakist­an for their own agenda­
By Kamran Yousaf
Published: June 2, 2017
Tweet Email 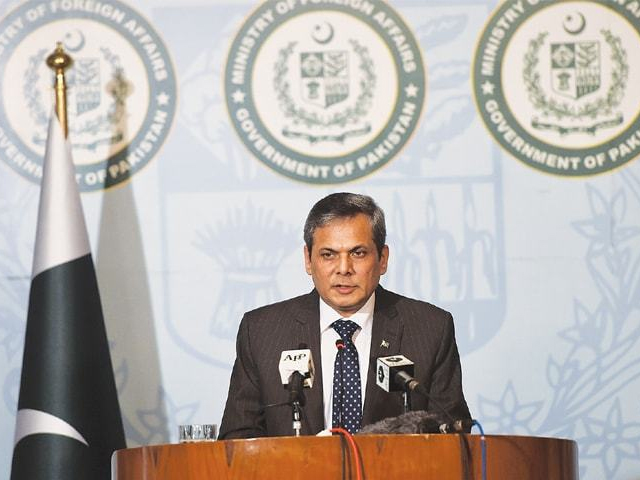 ISLAMABAD: Pakistan on Thursday strongly dismissed the allegations levelled by Afghanistan that its intelligence agencies were behind Wednesday’s deadly truck attack in Kabul that left over 90 people dead and hundreds of others injured.

“We reject the baseless allegations. The accusatory approach is unhelpful towards efforts for peace,” Foreign Office Spokesperson Nafees Zakria said at a weekly news briefing here.

He was responding to claims made by Afghanistan’s National Directorate of Security (NDS) that Kabul attack was planned by the Haqqani Network in Pakistan with the “direct help of the Pakistani intelligence agency, ISI.”

The allegations came within hours of the deadly attack in a highly-secured area housing diplomatic missions. The residences of Pakistani diplomats and staff members were also damaged while some of them also received injuries, according to the Foreign Office spokesperson.

Responding to the charges, Zakria pointed out that Pakistan had suffered from the menace of terrorism and made unparalleled sacrifices.

“It is disappointing that some elements, which have no interest in peace in Afghanistan and want to damage Afghan-Pakistan relations, have been maligning Pakistan for their own agenda,” he said.

The spokesperson further said Pakistan, as the most sincere friend and well-wisher of Afghan people, had contributed to the Afghan-owned and Afghan-led peace process, whenever requested.

Rebutting the allegations, he said all recent independent assessments on the situation in Afghanistan suggested that the factors responsible for the deteriorating security situation were internal to Afghanistan.

To back his claims, Zakria referred to several reports including the UN’s Study of 2014, General Nicholson’s annual assessment report on Afghanistan published on December 5, 2016 and US Special Inspector General for Afghanistan Reconstruction, SIGAR’s reports of January 2017.

“These reports have amply identified the risks and obstacles in the way to peace and reconciliation in Afghanistan as internal to Afghanistan. Therefore, mere rhetoric of blaming others to hide their failures in Afghanistan will not solve the problem,” he argued.

The spokesperson denounced the recent interview by the Indian army chief in which he defended the major who used a Kashmiri youth as human shield in the Indian Occupied Kashmir.

“Executive Director, Human Rights Watch, Kenneth Roth, has said in social media that Indian army chief has shown criminal leadership, for his backing to the use of an innocent Kashmiri as human shield,” Zakria noted.

He said unfortunately and condemnably the Indian occupation forces continued with their brutalities against defenceless Kashmiris.

“In just last five days they have martyred more than a dozen innocent Kashmiris, including three extra-judicially. During the last month, 28 Kashmiris were martyred, 945 were seriously injured and many hundreds arbitrarily arrested.”

He said India also continued to violate Ceasefire Understanding between the two countries. “This morning, India has carried out unprovoked ceasefire violations in Battal and Hot Spring Sectors of Azad Jammu & Kashmir, resulting in Shahadat of two civilians, and injuries to many.”

Responding to the Indian propaganda on Kulbhushan Jadhav’s case, the spokesperson said suspicions were created regarding the lawyer who represented Pakistan at the International Court of Justice (ICJ). Barrister Khawar Qureshi is consistently rated by the Legal Directories as one of the UK’s top International lawyers, he said, adding that he was the youngest advocate to appear before the ICJ in 1993 in the Genocide case (for Bosnia against Serbia).

Qureshi has undertaken hundreds of cases involving various international governments — US, Russia, Italy, Kazakhstan to name a few — before all levels of the English courts, as well as international arbitral tribunals and the International Court of Justice, according to the spokesperson. He has acted or advised on matters involving around 80 different jurisdictions. As an English Barrister he is bound to represent any client without discrimination.

Contrary to Indian media’s disinformation about Barrister Qureshi’s legal fee, Zakria said he had charged highly discounted fees. “He himself covered the costs of his juniors’ fees and even cancelled other professional commitments for another government in order to assist Pakistan,” he insisted.