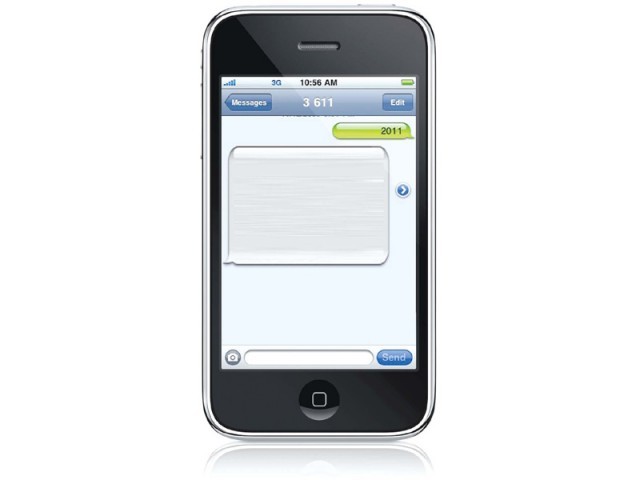 Smses have been open turf for marketers.

Pakistan has seen tremendous growth in the mobile sector. Within this sector, SMS volumes have seen 253 per cent growth from 2009 to 2010, according to PTA reports. In 2009, an average of 128 SMS messages were sent per person, per month, or an average of just over 4 messages a day. While some of this growth comes at the heels of corporate use, the consumer sector remains the strongest contributor to SMS volumes.

On the eve of the Pakistan-India semi-final, there were few if any who were spared from SMS spam. These messages ranged from tickets to match-viewing events to various special deals just for the day.

One SMS marketer, on the condition of anonymity revealed that he had lists of over 30,000 subscribers within the Defence Housing Authority area in Karachi. He was a relative new-comer to the market and installed readily available bulk SMS software on a used computer.

How he got the lists was a trade secret but the computer itself had a couple of GPRS modems fitted with SIM cards that were kept on rotation which is information readily available to anyone who cares to Google it. When questioned about the legitimacy of the medium his response was a nonchalant “there is nothing really wrong with it, nobody really cares”.

If the telecoms really wanted, they have many ways of profiling accounts which are used solely for SMS marketing and they can use common throttling and profiling techniques. One such profiling technique may identify newly activated SIM cards, sending out SMS messages at a high frequency.

While it is hard to estimate the contribution of spam to the overall SMS traffic, the problem seems to be growing worse as more telemarketers enter the fray and phone number catalogues grow larger. Telecoms are reluctant to take any proactive measures since higher SMS volumes result in higher revenue.

The Pakistani market in general, is highly unregulated. Even when it is, those regulations are hard to enforce. The fact that pre-paid SIM cards are easy to come by, poses the primary problem of not only spam but also security, making it far more difficult for law enforcement to track down all sorts of offenders.

The Pakistan Telecom Authority’s 2009 regulations against spam, titled “Protection from Spam, Unsolicited, Fraudulent and Obnoxious Communication Regulations, 2009” did little to appease the problem and seemed more of a token move designed to fill a void. The regulations make provisions for a Do Not Call Register (DNCR) that is supposed to allow consumers to register against such unsolicited marketing by voice calls or SMS are elusive, if they exist in the first place. Subsequently, marketers will be required to filter out any numbers that occur in such lists.

How frequently these lists will get updated, how markets will use it to filter out and how complaints will be tracked against offenders and so forth are distant thoughts even now, two years after the regulation was passed. The problem at the current rate is like to get much worse before it gets any better.