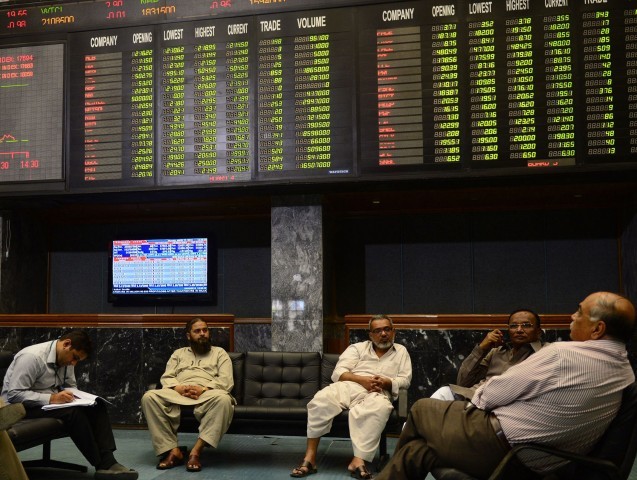 KARACHI: Stocks took another hammering on Tuesday as the KSE-100 index fell over 850 points in intra-day trading before making some recovery by the end of the session.

At close, the Pakistan Stock Exchange’s (PSX) benchmark 100-share index recorded a fall of 685.74 points as a two-hour average price mechanism kicked in. The trading finished with a 1.32% decrease – the fourth successive finish in the red – with the index standing at 51,453.16 points.

Market talk suggested that new taxation measures announced in the Budget 2017-18, which were largely taken as a negative for the stock market, were the primary reason for continued selling even as Pakistan geared up for inclusion in MSCI’s Emerging Markets Index on June 1.

Index-heavy stocks bore the brunt of profit-booking and selling pressure due to budget measures.

According to Elixir Securities, Pakistan equities tanked ahead of the MSCI transition as index names dragged the benchmark index below 51,500 points on institutional profit-taking.

“The market opened positive and traded higher for a brief period where notable blue chips that underwent profit-taking in the last three sessions edged up and pushed the KSE-100 index by as much as 0.6% above 52,400 levels,” said analyst Ali Raza.

“The index, however, couldn’t sustain gains for long as the MSCI EM constituents and select index names came under selling pressure with reports of selling by a few aggressive local institutional investors doing the rounds and resultantly the index settled down by over 1,000 points from its intra-day high.

“[We are] expecting an extremely volatile day on Wednesday with the last two hours of session seeing most action on MSCI transition-related trades,” he added.

JS Global analyst Arhum Ghous said “bloodbath” was witnessed at the local bourse as the KSE-100 index lost 686 points to close at 51,453. Major correction appeared in the market due to continuous net foreign outflows over the past week.

“Banking sector led the decline as big banks such as MCB (-3.45%) and HBL (-2.72%) lost value to close in the red zone,” he said. “Profit-taking was witnessed in the steel sector on the back of news that steel is set to become expensive as budgetary measures kick in. An industry official says price could be increased by Rs2,500-3,000/ton,” said Ghous.

International Steels closed at its lower circuit with International Industries (-4.90%) and Aisha Steel (-3.62%) closing in the red as well.

“Moving forward, we expect volatility to persist in the market and recommend investors to accumulate MSCI EM stocks on dips due to upcoming MSCI rebalancing,” he added.

Shares of 382 companies were traded. At the end of the day, 79 stocks closed higher and 294 declined while nine remained unchanged. The value of shares traded during the day was Rs12.97 billion.

Foreign institutional investors were net sellers of Rs2.193 billion during the trading session, according to data maintained by the National Clearing Company of Pakistan Limited.