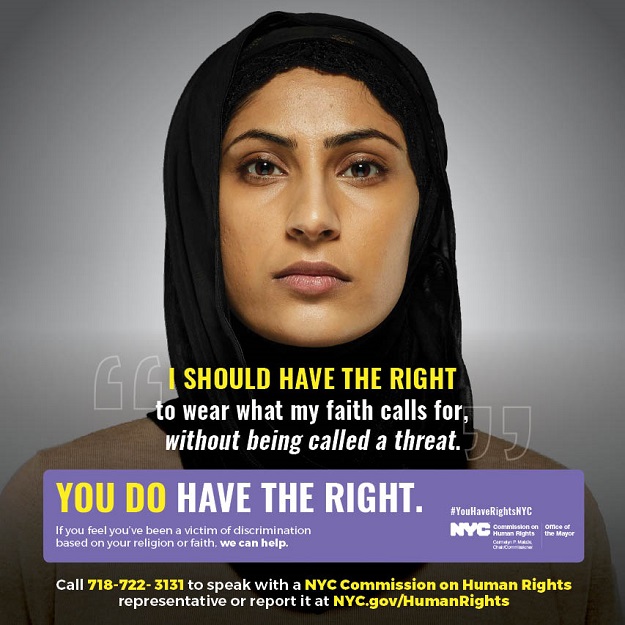 After months of waking up to news of hate crimes, the New York Commission on Human Rights collaborated with the city Mayor Bill de Blasio to launch a city-wide anti-discrimination campaign to tackle the issue.

The campaign features placards in subway stations and social media, PSA videos and community events to highlight the cause. The ads show six individuals from diverse backgrounds standing up for their right to pray, speak and live freely in New York without getting harassed. Encouraging victims to report discrimination they face in daily life.

One of the ads feature a Muslim woman in hijab, emphasising on her right to wear what her “faith calls for without being called a threat.”

While one has a latino standing up for the right to feel proud of her heritage “without being told to go back to my country.” 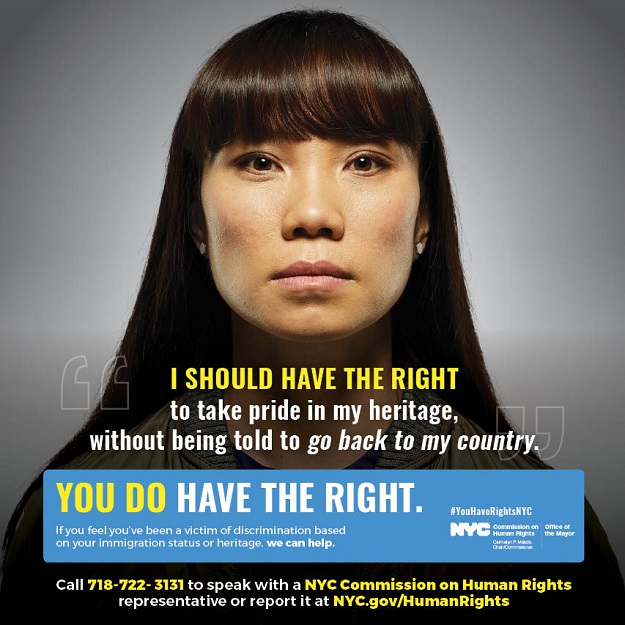 Another placard features a Jew with the caption “I should have the right to be who I am without being worried for my own safety.” 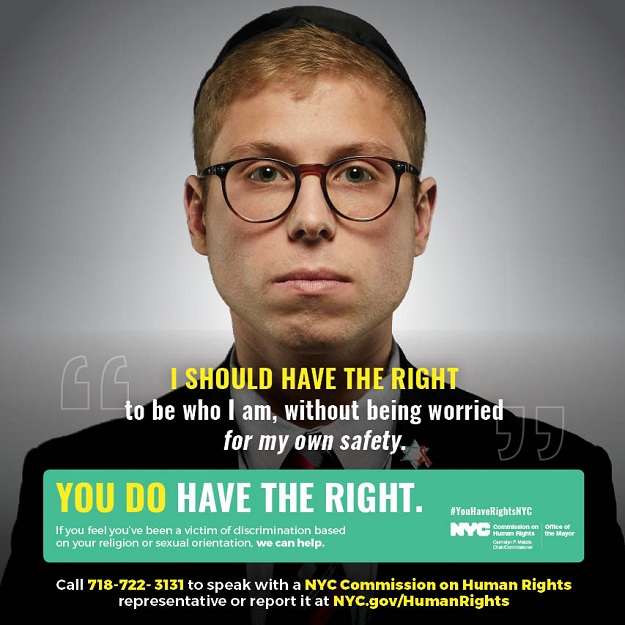 Apart from placards, events and ads, the human rights commission released videos encouraging victims to stand up for their rights and not take discrimination they experience lightly. One video shows an Arab Muslim man speaking to a loved one on the phone in Arabic when a white woman interrupts him to tell him that he is “scaring people” by talking in his mother-tongue.

Another video highlights the discrimination faced by people of colour when applying for jobs:

“It is now more important than ever for New Yorkers to stand united as one city and reject hatred and intolerance,” said the NYC Mayor at the launch. “In New York City, our diversity is our strength. It does not matter where we come from, who we love or who we worship. We are all New Yorkers, and deserve to be treated with dignity. Regardless of the national rhetoric, we have absolutely no tolerance for discrimination in our city.” 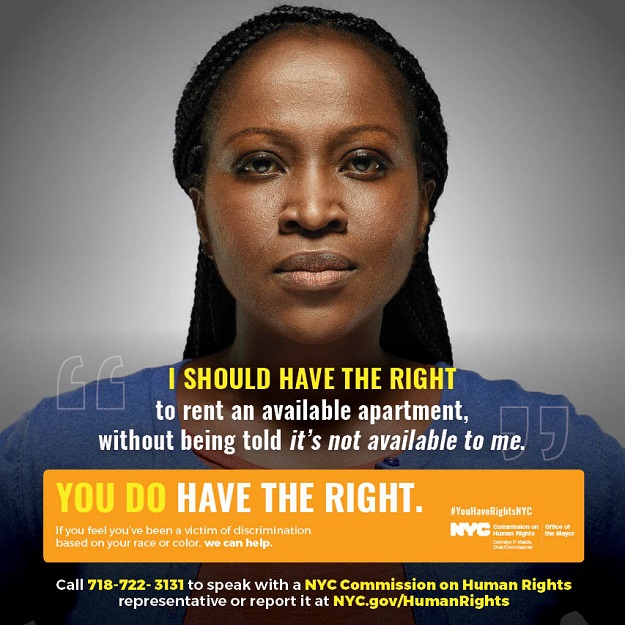 “Every New Yorker has the right to be themselves without being discriminated against, no matter where they come from, what language they speak, who they love, or their religious faith,” said Carmelyn P Malalis, the chair and commissioner of NYC Commission on Human Rights. “At a time when bias incidents are on the rise, this campaign sends a clear message to all New Yorkers that they do have the right to live free from discrimination and harassment and that NYC has your back. In this city, we are all New Yorkers. No one has permission to discriminate against you or your community. If they do, rest assured that the NYC Commission on Human Rights will hold them accountable.”

The move follows a report by the commission that saw a 60 per cent increase in incidents of discrimination in 2016 – a trend that has continued since the beginning of 2017 with 1,600 open cases compared to last year’s 1,200, a 30 per cent increase in the same time period. The commission revealed that 40 per cent of all open cases were on complaints of discrimination based on race, religion, origin and immigration status. 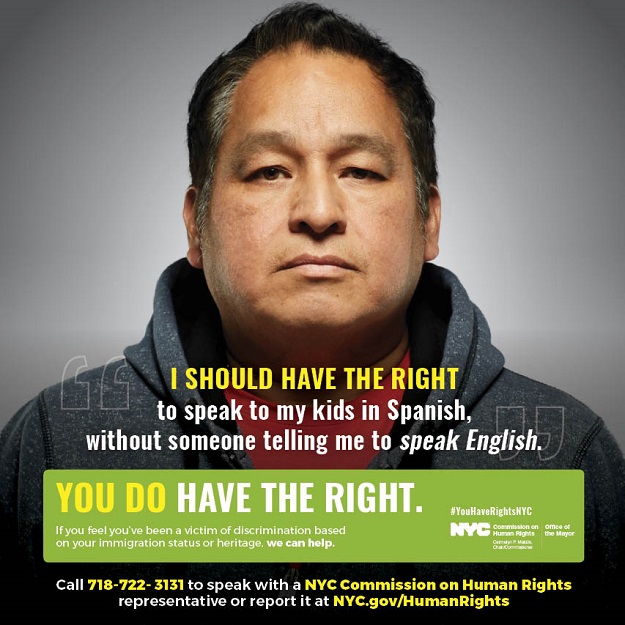 The commission, the city agency that enforces NYC Human Right Law, has stepped up its efforts to educate people of their rights with hosting events like “Know Your Rights” across the city, creation of a Bias Response Team and increasing its internal language capacity to reach out to the masses.

Rawaa Nancy Albilal, President and CEO of the Arab-American Family Support Centre, said “as a trauma informed service provider serving the Arab, Middle Eastern, Muslim, and South Asian immigrant communities, the Arab-American Family Support Center (AAFSC) has experienced firsthand the physical and mental repercussions of the current social and political environment on the lives of the communities we serve.” 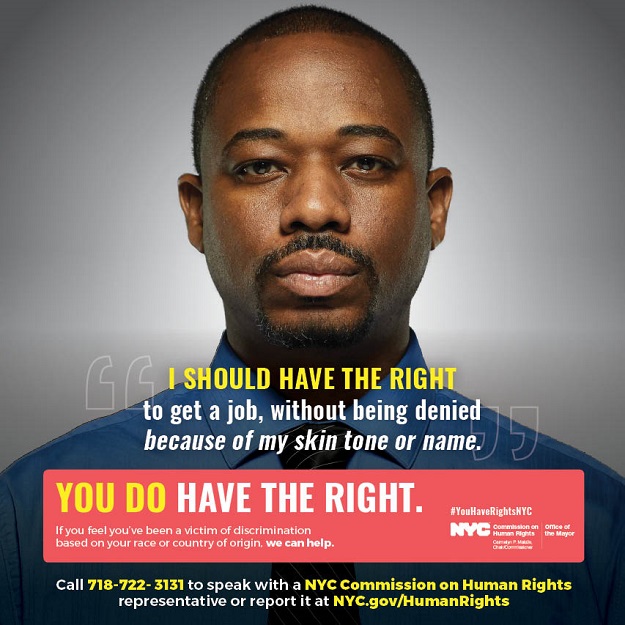 “Our staff and volunteers have seen an increase in hostility and aggression towards our communities, including youth being called terrorists, a staff member being attacked on a bus, families experiencing increased trauma from losses related to the life they left behind, and the uncertainty that comes from not knowing if they will ever see their family members again. We stand with Mayor Bill de Blasio’s and the NYC Commission on Human Rights’ citywide anti-discrimination campaign. We believe that all New Yorkers have the right to feel safe and live in dignity,” she added.

While another report released by the Anti-Defamation League recorded a 34 per cent rise in anti-Semitic acts in 2016. “The 2016 presidential election and the heightened political atmosphere played a role in the increase,” the ADL concluded in its report.