To ensure a future for our nation­s and to resolv­e our differ­ences we will first have to try and put them aside
By Shahzaib Khan
Published: May 30, 2017
Tweet Email 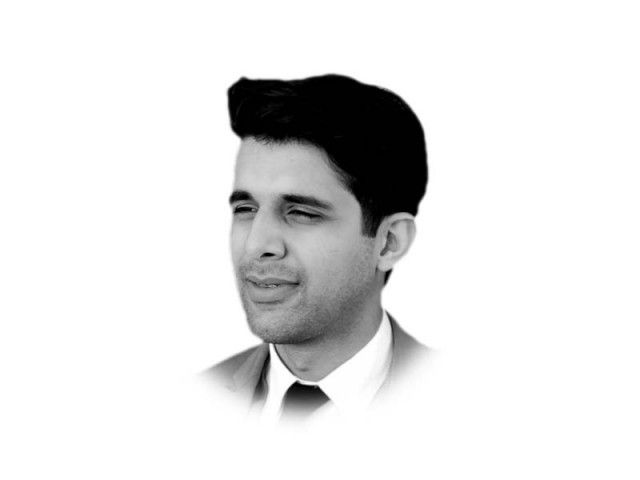 Because if it’s not love

That will bring us together

It is believed by some that The Smiths song, ‘Ask’, was written by Morrissey in the ‘80s against the backdrop of the Cold War that defined the decades after the Second World War. Literature suggests that the Cold War brought with it an inescapable feeling of damnation for the majority of the world. The fear of global nuclear war gripped the minds of people across the world. But there was an even more genuine and dangerous fear, that human nature entailed self-destruction.

Few things continue to have meaning when one concedes that mankind has an intrinsic interest in its own destruction and thus the gloom and doom of the Cold War. And it is here, and in this context of mutually assured destruction, that Morrissey is said to have uttered these words. Morrissey then refers to the nuclear bomb, and the death it brings with it. If, it is not the love that he asks for earlier in the song, it’ll be death, and nuclear destruction that will bring us together, claims the vocalist.

Sitting in Karachi and reading papers from across the subcontinent, it is hard for me to not draw an imminent parallel between the cold war situation portrayed in the song, and the ever-present cross-border tension between Pakistan and India. There seems to be no end to the squabbles between Pakistan and India, which have quite often turned into grave confrontations leading to the loss of precious lives. The question then is, do the lyrics stand true?

Perhaps, a useful international equivalent of the Indo-Pakistan cross border rivalry is found in the historical Franco-German cross border rivalry. Modern Franco-German history is crudely divided into three distinct and evolutionary phases, for almost a century, from the Franco-Prussian wars of 1870 up until 1945 the relationship is categorised as “hereditary enemies.” This relationship is characterised by cross border tensions, hot and cold conflicts, and sporadic wars, much like the one we have today between Pakistan and India.

After 1945 however, there is an immediate and extreme change in the relations, which then leads to a period of “reconciliation” till 1963 and subsequently a period of unprecedented cooperation as a part of a “special relationship” that comes to be known as Amitié franco-allemande (Franco-German friendship).

How did the French suddenly, after 1945, start “liking” their German counterparts and vice versa? What happened in 1945?

Over 60 million people died. That was about 3% of the population in 1940. It took 60 million lives, and the destruction and grief that accompanied them for the French and Germans to realize that they had had a capacity for cooperation and liking for each other all along. Only 20 years after a century of “hereditary enmity,” numerous wars and millions of deaths, the French and Germans realized that through cooperation and friendship they could lead Europe together into a future of prosperity. It took 60 million deaths for them to realise this. Perhaps Morrissey is not too far off with his theory that “the bomb will bring us together.” Perhaps the fear that human nature entails self-destruction is not all that dystopian.

And yet the time to lose all hope has not still come. It may be, that what happened between France and Germany is a dreadful trend seen throughout the course of history, between Iran and Iraq, Britain and France, Japan and China, North and South Korea, but again, hope should not be lost.

I refuse to agree with Morrissey, I refuse to agree with the theory of human nature’s intrinsic quality of self-destruction and I disagree with those who tout man’s unfortunate history of waging war as a prediction of its future. In perhaps a predated reply to Morrissey, Martin Luther King bellowed in his acceptance speech for his Nobel peace prize: “I refuse to accept despair as the final response to the ambiguities of history. I refuse to accept the idea that the “isness” of man’s present nature makes him morally incapable of reaching up for the eternal “oughtness” that forever confronts him… I refuse to accept the view that mankind is so tragically bound to the starless midnight of racism and war that the bright daybreak of peace and brotherhood can never become a reality. I refuse to accept the cynical notion that nation after nation must spiral down a militaristic stairway into the hell of thermonuclear destruction. I believe that unarmed truth and unconditional love will have the final word in reality.”

And while I tried to think of examples which would provide some comfort to Pakistanis and Indians, that we are not destined for enmity until we kill ourselves, I admittedly did not find much. There were, however, a few outstanding exceptions, contemporary Cuba and the US for example. While this relationship has not been short of tensions, rapprochement and cordiality seems to be on the cards. After decades of ideological, hereditary enmity, the Americans and Cubans are giving peace a chance. Whether they succeed in a complete normalization of relations is yet to be seen.

“Togetherness,” however, even if to a limited extent has been achieved, and that too without the “bomb.” It is not that the age of conflict is receding, and peace is being given a chance throughout the world. Today, the Korean Peninsula stands on the verge of nuclear holocaust, eastern Europe is in a constant state of militaristic flux. And the Middle East has been torn apart.

And it is in this environment that Pakistan and India have to look towards the Cuban-American relationship and not, perhaps, almost the rest of the whole world as they figure out the path to future relations. Together, Pakistan and India may controvert history, perhaps even human nature, and show the world, that peace can be achieved before death, that what brings us together will be “love,” or to put it more aptly, what should be an inherent appreciation for human life and survival, and not the “bomb.” Admittedly, this is difficult, the issues that beset our countries are complex and many. But threats, wars, conspiracies and hate do not help, dialogue and cooperation do. To ensure a future for our nations and to resolve our differences we will first have to try and put them aside. As Hafez, so eloquently puts it:

Build a House for men and birds.

Sit with them and play music.

For a day, for just one day,

talk about that which disturbs no one

and bring some peace,

into your beautiful eyes