The stolen childhoods of Indian-occupied Kashmir in pencil and crayon

The stolen childhoods of Indian-occupied Kashmir in pencil and crayon 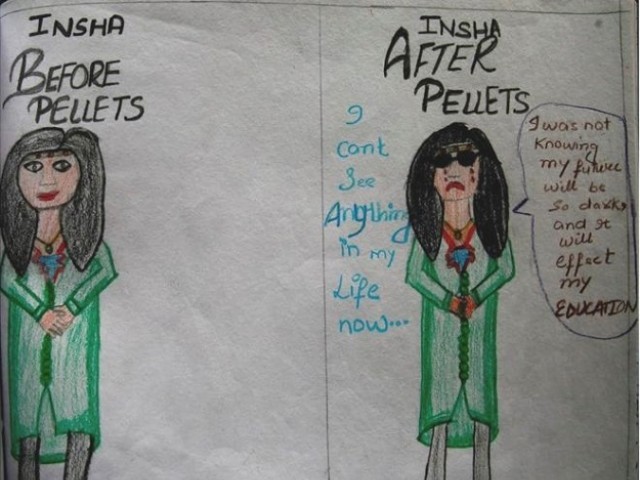 The artwork done by schoolchildren in IOK spoke of a violent world outside the enclosed spaces where they lived - trapped inside their own homes. They depicted the horrors of the present and the future. PHOTO: BBC News

“I cannot see the world again and cannot see my friends again. I am blind,” read a painting drawn by a student in Indian-occupied Kashmir (IOK).

When freedom fighter Burhan Wani was killed in a police encounter in July 2016, IOK descended into a state of violence which lead to over 9,000 people being injured. Of them, 1,200 were children who were blinded by small steel pellets fired by Indian forces.

Children had then stayed indoors mostly as violence spread, drawing their feelings in the confinement of their homes, until schools reopened in the winter.

When they returned, teachers said they found the students irritable, anxious and uncertain. According to one school’s principal they came looking “pale, like zombies.” But some warmth spread when they cried and hugged each other after months-long confinement. Others, however, screamed and became aggressive without reason until counsellors were called to calm them down.

Then one day, some 300 of them went to a hall and sat down with paper and crayons and let all their feelings out on paper drawing furiously. 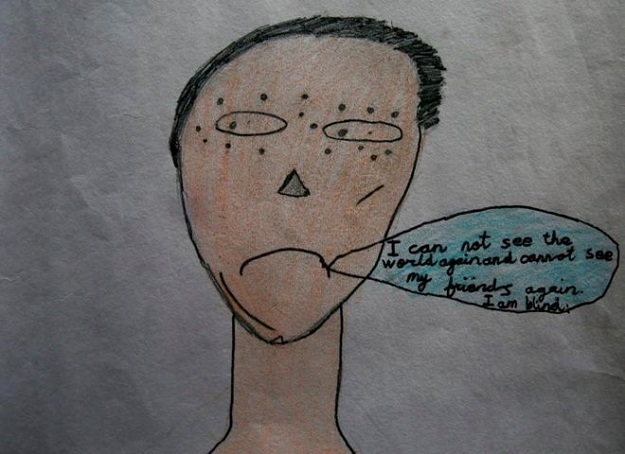 The artwork done by schoolchildren in IOK spoke of a violent world outside the enclosed spaces where they lived – trapped inside their own homes. They depicted the horrors of the present and the future.

Australian art therapist, Dena Lawrence, who had conducted art lessons in the valley five years ago, had found black to be the predominant colour in paintings. However, five years later Masood Hussain says the paintings have “gone from the serene to the violent”. “They draw red skies, red mountains, lakes, flowers and houses on fire. They draw guns and tanks, fire-fights and people dying on the street,” Masood observed.

A psychiatrist, Arshad Husain, said the artwork depicts collective trauma. “We think children are too young to understand. That’s not true. They absorb and assimilate everything around them. They express it in their own way,” he added.

Arshad said the paintings were reminiscent of what the children drew after 9/11 – images of the twin towers on fire and being yanked off the ground by Osama Bin Laden with blood-red skylines in the background.

The children drew valleys on fire, young faces scarred and blinded by pellets and bodies scattered over the floor and some covered the paintings in text. 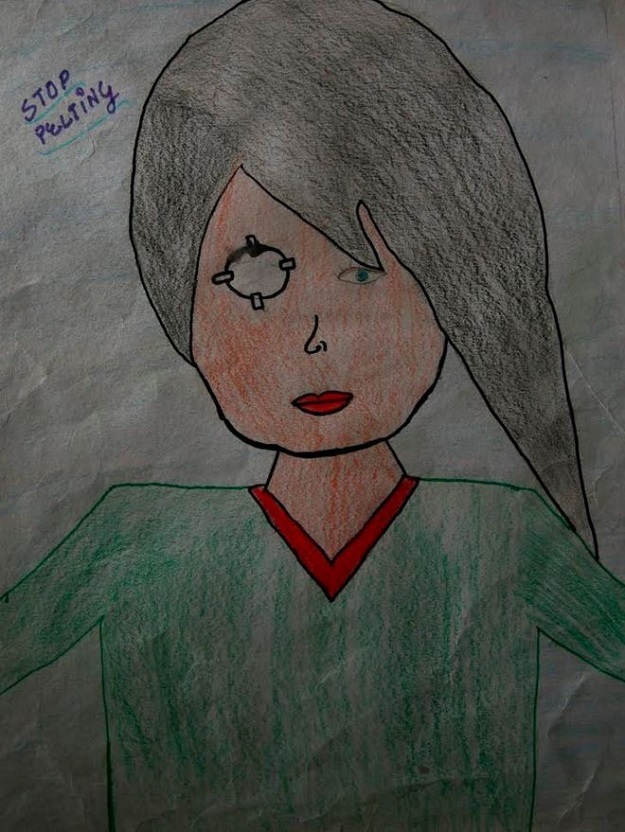 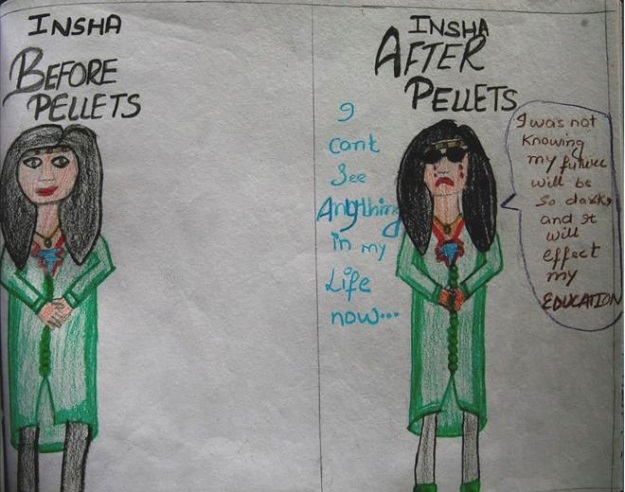 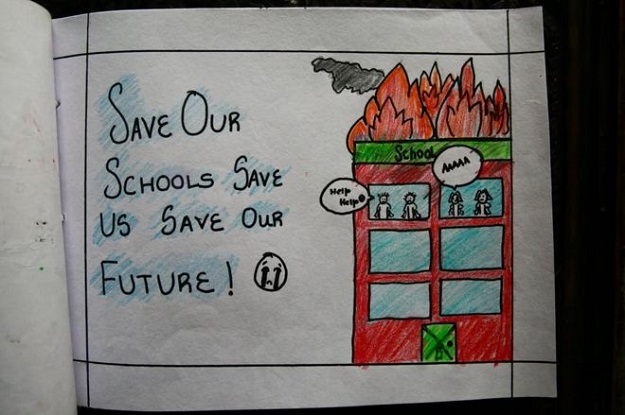 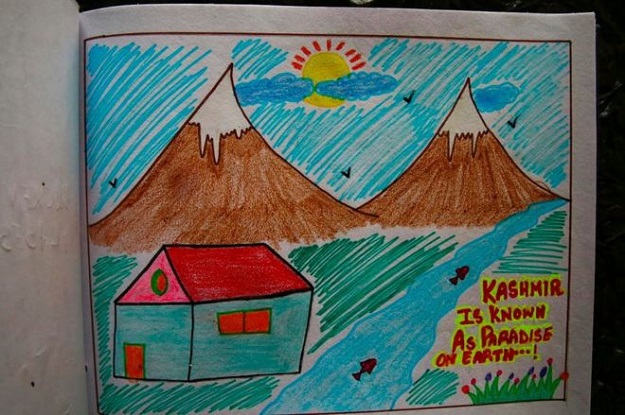 Anantnag explained his painting saying, “These are the mountains of Kashmir. And here’s a school for kids. On the left are army men and opposite them are stone-throwing protesters who are demanding freedom.”

Another theme that kept repeating is the burning down of schools. In a picture we see children trapped in a school screaming, “Help us, help us. Save our school, save us, save our future.”

Some have a political angle where pro-freedom graffiti is drawn and signposts read, “Save our Kashmir.” 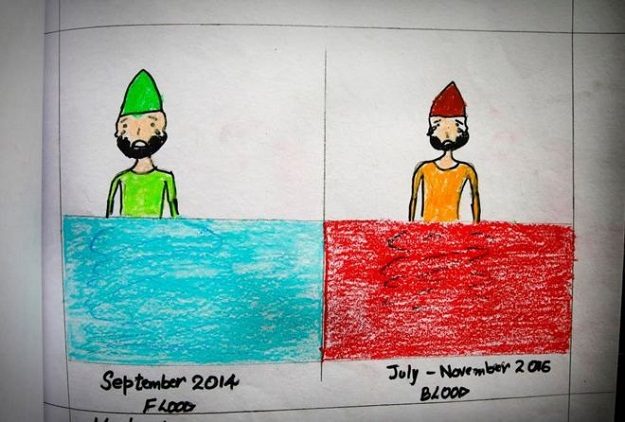 In another picture the children let out their frustration against the lack of internet and mobile phone services during the protests. 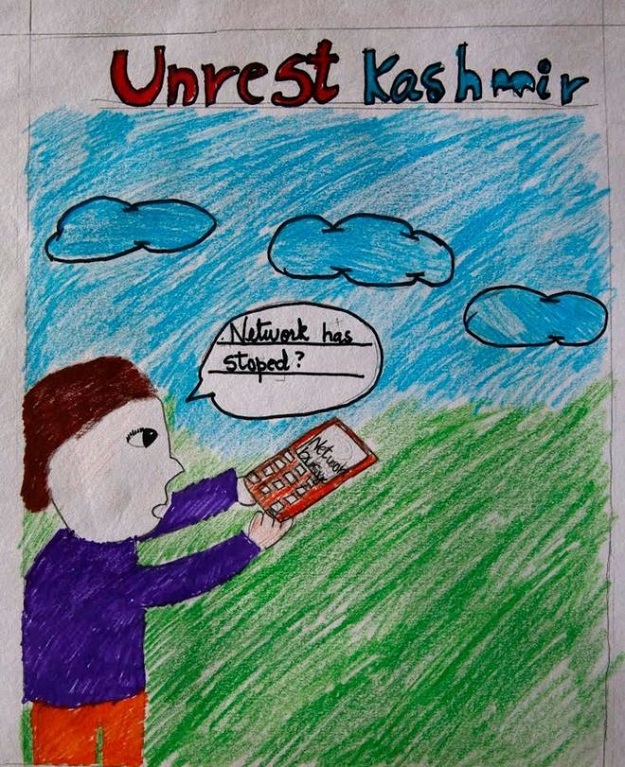 However, hope still remains in IOK. A girl’s painting reads, “Let our future be bright, make us educated, don’t make this crisis a reason for darkness. It’s never too late.”